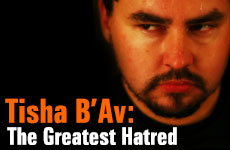 Understanding the story the sparked the destruction of the Temple.

Nearly 2,000 years ago, on the 9th of Av, the heart of the Jewish people, the Holy Temple, was set on fire. Since then, our history has been filled with scattering and suffering. Like many broken and burnt hearts, it started with a mistake that turned into a fight that escalated to epic proportions. To heal and rebuild, we need to understand what went wrong and what we can do to fix it.

The host of the party had a friend and an enemy, whose names were quite similar, one called Kamtza and the other Bar Kamtza. Since it was a fancy affair, hand-delivered invitations were sent out. Unfortunately, the messenger confused the friend and the enemy, and delivered an invitation to the wrong person, who subsequently came to the party.

It is surprising that Bar Kamtza would go the party of someone whom he knew disliked him. Perhaps he thought that the invitation was a move toward reconciliation and therefore was happy to receive it, showing up to demonstrate his own willingness to put aside the past. In light of this, what happened next is even more tragic.

Upon seeing his enemy at his home, enjoying the food he had provided, the host, feeling quite incensed, told this invited/unwelcome guest to get out of his house immediately. Rejection, and all the more so such a public rejection, would be very painful to Bar Kamtza. He tried to reason with the host and pleaded, “Please don’t throw me out. I will pay you for whatever I eat, but please do not embarrass me.”

“I will pay you for the cost of your entire party, just please do not force me to leave.”

The host refused and threw him out.

It is remarkable that it was worth more to the host to hold on to his hatred than to have his entire party paid for in full. In any case it was a bad move, and things got worse from there. The Sages of the generation were present at this gala affair and did not protest the host’s treatment of Bar Kamtza.

Now, Bar Kamtza, by this time was in a pretty bad mood. When he saw all the Sages sitting there silently, he concluded that the way he was being treated was fine with them. If so, they were also to blame and he would take his revenge on them as well.

Bar Kamtza went to the Roman authorities and told them that the Jews were rebelling against them. They asked for proof. He said to them, “Send a sacrifice to be offered in their Holy Temple and you will see that they will refuse your sacrifice.” The Romans sent an animal with Bar Kamtza to the Holy Temple to check what he was saying.

On the way, Bar Kamtza made a slight blemish to the animal that would render it unfit according to Jewish law. When he got to the Temple some Sages argued that they should offer the sacrifice anyway because not to do so would be endangering their lives. Their opinion was not heeded. Some suggested that they should kill Bar Kamtza so that he should not go back to the Romans and incite them against the Jews. This opinion was also not heeded. In the end, the offering was not brought up, and Bar Kamtza took his revenge by going back to the Romans and slandering the Jews, leading to the destruction of the Holy Temple, the loss of many lives, and our subsequent exile.

If we consider the centrality of this story in the destruction of the Holy Temple, and the level of tragedy that resulted from it, it stands to reason that it is about more than just a dislike between two people. When we take a closer look, we see that it is a story about a lacking in the humanity of the Jewish people as a whole, from the greatest scholars to the common man. There is a question that screams out from beginning to end: Why didn’t anyone do anything?

Hatred is seeing others in pain and danger, and not caring enough to get up and do something.

When Bar Kamtza was publicly shamed, why did no one try to help him? When Bar Kamtza later came to take vengeance, threatening the lives of the entire Jewish people, why do we find no dialogue trying to appease him? At the very least, he should have been killed in self-defense as the Talmud teaches that if someone comes to kill you – kill him first! The level of passivity that we find when it came to considering others’ welfare, whether emotionally, as in the case of Bar Kamtza’s shame, or physically in the case of his revenge, is astounding. Where was our humanity?

When the Sages taught that the Holy Temple was destroyed because of baseless hatred, this is what they were referring to. Hatred is not just actively doing others harm. It is also about not caring. It is about seeing others in pain, others in danger, and not caring enough to get up and do something. If we think about, treating others like they do not exist is the greatest hatred.

If we wish to rebuild the Holy Temple, we need to begin with our hearts. When we care enough to really see the people that are around us, whether they are our spouses, children, work associates, or neighbors, we are laying the foundation of our sanctuary. Each time we move beyond ourselves and take action to make a positive difference in the life of another, we are adding a golden brick. With time, sensitivity, and positive action, we have the power to heal and rebuild the heart of our nation and build a holiness that will last forever.

Rabbi Benjamin Rapaport, M.Sc., lives with his family in Jerusalem, where he works with individuals and groups, in person and by skype, to help them actualize their strengths to accomplish personal and professional goals. He is the author of The Jewish Art of Self-Discovery, available on Amazon. For more, see: benjaminrapaport.com

The Price of Disunity

Formula for Jewish Survival
Scientific Curiosity and the Divine Encounter
Mind Over Milkshakes
Love the Convert
Comments
MOST POPULAR IN Tisha BAv
Our privacy policy
Aish.com Is Looking for Great Writers