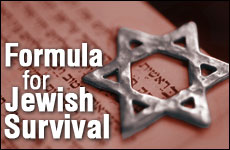 From the vantage point of one of the bustling streets of the Old City of Jerusalem, I look down at the Cardo, a partially-restored site of an ancient Roman road, built when Jewish Jerusalem lay in ruins. And I marvel: the Roman conquerors and their remains are nothing more than a popular tourist stop, while the Jews, defeated and exiled, are here; a pulsing, growing and vibrant people.

The Jewish ability to survive is amazing. So many attempts to wipe us out, so much persecution and destruction – yet we are still here. What’s the secret?

I found some answers in the Talmud, on the page that so poignantly describes the last days of Jerusalem before it was destroyed by the Romans.

The Talmud tells us that one of the Jewish leaders of the time, Rabbi Yochanan ben Zakkai, had smuggled himself out of the besieged city of Jerusalem. His mission: To meet with the commander of the Roman forces, Vespasian, to try to save the Jewish people.

The Talmud [Gittin 56b] relates what happened.

Rabbi Yochanan greeted the commander: “Peace be upon you, King.”

Vespasian responded: “You deserve to be put to death, as I am not the King.”

Moments later a messenger from Rome arrived and announced to Vespasian: “Rise. The emperor is dead, and the Senate has appointed you leader.”

Vespasian, impressed by Rabbi Yochanan’s prediction, tells him: “Ask me for something and I will give it to you.”

What’s going on? Imagine the moment. The Jews are on the brink of national disaster and all he asks for is a small yeshiva, an old sick rabbi and a family of blue bloods?

What was this rabbi thinking?

On the other hand, you can’t argue with success; Rabbi Yochanan ben Zakkai’s plan worked – the Jewish people indeed survived. Why?

Rabbi Yochanan ben Zakkai asked for things that are the essence of the Jewish people: The Torah, their desire to have a relationship with the Almighty and connect with God, and the unyielding Jewish belief in a better and peaceful future.

The Torah has an amazing power of regeneration. A small group of Jews studying Torah will grow and expand. Inevitably, their ideas will spread throughout the Diaspora, inspiring the Jews to remain Jews.

We witnessed this amazing phenomenon in our own times. In the Soviet Union a small group of dedicated Jews began to study Torah despite the danger. Eventually this clandestine network of study groups turned into thousands, becoming an important part of the resurgence of Russian Jewry.

In the space of two generations the few surviving refugees saw an almost miraculous renaissance in Torah study.

Similarly, the movement to teach ba’alei teshuvah (returnees to Judaism) was started in the late sixties by a few individuals who wanted to teach Torah to young Jews in English speaking countries. Their first few students became tens of thousands, through the awesome power of Torah.

Back to the future

Rabbi Yochanan’s second request was to preserve the Davidic line, the line that would produce the Messiah, the future King of Israel. With this request Rabbi Yochanan was giving voice to the belief and the hope that sustained and energized the Jewish people for millennia – that a peace-filled universe is not only possible, but inevitable.

The Temple had been the Jews’ place of worship for over 400 years, the place where they came to pray and satisfy their desire to connect with God. With its destruction the survivors and the generations to follow would need new strategies and skills to build a relationship with God.

Rabbi Tzadok, a holy man who had spent so many years praying, would teach them. He was the expert, a national treasure who needed to be nursed back to health so the Jews could learn how to maintain their connection with the Almighty, how to pray even after the destruction.

Prayer is an integral part of the Jewish arsenal. Throughout the centuries the Jews persevered, overcame and survived in their houses of prayer.

My mother-in-law is a Holocaust survivor. When she speaks at family celebrations she often talks about her experiences in Auschwitz. Though what she says varies, her ending is always the same: Am Yisrael Chai, the Jewish nation lives on!

Tisha B’Av is a time to remember the tragedies that befell the Jewish People, but – as Rabbi Yochanan ben Zakkai saw so clearly – it is also a time to focus on hope, the future and rebirth.

What Happened to the Jews of Arabia?
Evolution 2.0: The Coming Darwinian Revolution
Chukat 5782: Let’s Play the Blame Game!
The Sin of Moses: The Two Ways to Communicate
Comments
MOST POPULAR IN Israel
Our privacy policy