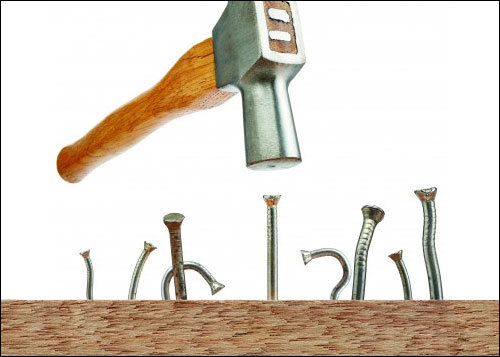 How to stop treating your fellow Jews as the enemy.

As I pulled into the gas station to fill my rapidly-deflating tire with air the other day, I saw that someone was already using the air hose to pump up his bicycle tires.

My kids were in the car – we were quickly becoming late for my daughter’s own birthday party – and I let out an annoyed “oy vey!” My kids quickly picked up on my mood and said their own “oy veys” a few times as I stepped out of the car.

You know how there’s a way to get too close to someone – maybe while sighing loudly – to indicate you want them to hurry up? Well, I’m not proud now to admit it, but I did the invade-his-personal-space-and-be-impatient thing. I stepped behind him, put my hands on my hips, and exhaled. Noisily.

Picking up on my rudeness, the man turned his head and said he was planning to be a while. I looked at my watch: my daughter’s party was supposed to start in twenty minutes. More sighing.

And then the man with the bicycle and I recognized each other. His wife is a friend of mine. We eat meals at each other’s houses all the time. In fact, she and I had just sat together as we ate brunch at a community even that very morning!

Suddenly, we were all smiles. I backed up a few paces and removed my hands from my hips. Our neighbor stopped filling his bicycle tires and offered to fill up my car tire instead. “Stop by later on and I’ll patch your tire for you!” he cried. “Thanks, and you must come for Shabbos dinner again soon!” I said warmly.

Why was my first instinct to see him as an enemy over a minor inconvenience?

A few minutes later, with my tire full of air and our social calendar a little more crowded, I drove off. But far from feeling fulfilled, I felt like a complete fake.

Why did it take recognizing that we knew each other for us to be polite? He was a human being doing nothing wrong; a fellow Jew. Why was my first instinct to see him as an enemy over a minor inconvenience – and to do so in front of my children, setting them that example? Where was my humanity, my generosity of spirit? I was shaken that the dividing line between treating another person so rudely and embracing them warmly as a friend seemed to be so fine.

The Torah commands “You shall love your neighbor as yourself” (Lev. 19:18). The famous Jewish sage Rabbi Akiva singled out this commandment, calling it a “great” principle of the Torah. I’d just seen an example of the power of this central mitzvah: a world in which people go the extra mile for each other – in which they leap up to help one another, to invite them over, to make them feel loved and valued and secure.

I had also seen in my brief interaction with our neighbor, the opposite: a world in which people are loath to help, in which they begrudge their time, in which they withdraw into themselves.

Jewish tradition teaches that our central, holy Temple in Jerusalem – the one place where all Jews worshipped together in ancient times – was destroyed two thousand years ago because of this attitude: because we refused to stand together, failed to reach out to each other, because we allowed ourselves to feel sinat chinam, causeless hatred of our fellow Jews.

But this attitude can also change in a moment. We can make the supreme effort to regard even those we don’t know with the same warmth and concern we show to our friends, and help rebuild the Temple in the process.

We’re presently in the period called “The Three Weeks”. This distinctive period in the Jewish calendar, commemorating the beginning of the Roman siege of Jerusalem and the destruction of the Temple twenty days later, is a time to work on loving our fellow Jew and eradicating the insidious sinat chinam, baseless hatred that we allow to creep into the fabric of our lives. Here are five strategies to begin connecting with people around us today.

What Happened to the Jews of Arabia?
How I Learned to Love the Multiverse
10 Big Jewish Inventions
A Journey through Jewish Sicily
Comments