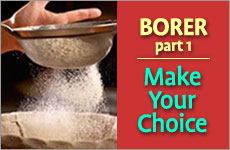 Be careful not to separate different types from a mixture.

Open any book on the laws of Shabbat, and you'll find that the section on Borer1 is quite long. Borer is one of the most detailed labor categories, with many common applications. At the same time, the basic concepts are pretty straightforward. So once we learn the principles, we should be able to understand how they apply in real-life scenarios.

Let's go back to the process of preparing wheat for baking. In our previous lesson, Zoreh, we learned that the wheat was winnowed to separate the inedible chaff. The next step involves further separating, by hand-picking pebbles and other debris out of the remaining wheat.2 This action is known as Borer – literally, 'selecting'.

From this classic case of Borer, we derive that selecting an item from a mixture is a form of labor, and therefore cannot be done on Shabbat. This melacha applies to all types of items, although most commonly we discuss Borer with regard to food.

How do we translate the concept of Borer into practical terms?

First, we need to understand what defines a mixture.

In halacha, a 'mixture' can come about in a few ways. Items can be mixed by being

As we can see, the halachic understanding of 'mixed' is different than the common English definition. In English, we would not say (for example) that a fruit and its peel constitute a 'mixture'. However, when it comes to Borer, the halacha views them as being mixed: they are both parts of the same item, and a person may select one of them, thereby setting aside the other part. This action of choosing or selecting is at the heart of Borer, as we'll explain.

At the same time, there are some groupings that we might colloquially call a 'mixture' that the halacha does not recognize. Take the absorbed category. Here, if the two items in question are very easy to tell apart, there is no question of Borer. So, while we said that small crumbs in soup would raise a question of Borer, a piece of potato in the same soup would not raise any issues. The potato is large enough that you clearly see it as a distinct item, not as something "mixed."

A halachic "mixture" is one that gives the appearance of a unit, rather than just several individual objects placed near each other. This is a subjective standard, based on the way it is perceived by the individual. A large crate of apples and oranges may be considered a mixture, but a small fruit bowl containing a few pieces of fruit, is not.4

From our discussion so far, we understand that to have a mixture, you need at least two separate types of items. How do we define when an item is a different type than another?

The two basic criteria for distinguishing between food items are taste and description or function.5 When two items have different tastes, even though they might be essentially the same thing, the halacha considers them to be different 'types'. So, an oatmeal cookie and a chocolate chip cookie are both cookies, but are different 'types' because they taste different.6

Taste is a pretty easy way to differentiate between foods. The notion of differences in description is more subtle. It means that you could have two foods that taste the same (or very similar) but are described by different names, and are therefore different 'types'.

Varieties of fruits are a good example. Go to the supermarket and you'll see Red Delicious apples, Granny Smith apples, Macintosh apples, and so on. They're all apples, and they all taste similar, but people consider them to be different enough that they are sold and marketed separately. As a result, they are different halachic 'types'.

If foods are sold according to size, this may also be enough to classify them as distinct 'types'. Eggs are a prime example. Whether small, medium, jumbo, or any other size, they are all eggs. However, size is an integral aspect of each type of egg, because people choose to buy a particular size according to their preference.7

(Note that incidental differences in size does not render something a halachic "mixture." For example, a bowl of sunflower seeds is not considered a mixture).

So much for foods. How about non-food items?

The key element here is function. Are the items used in the same way? Let's take the example of silverware.

On a basic level, all silverware is used for the same thing: to make it easier to eat. But of course each kind of silverware is used in a slightly different way – a spoon scoops, a fork grips, a knife cuts. And even within each of those 'types', there are further divisions: a teaspoon is not the same as a tablespoon, a butter knife is different than a steak knife. 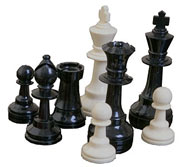 When it comes to Borer, we take the question of function to the most detailed level. Therefore, for example, a butter knife is considered a different 'type' than a steak knife, despite the obvious similarities between them.8

Using this logic, we can understand that the following would also be deemed different 'types':

As we'll learn in the following lessons, there are relatively easy ways to avoid Borer, in almost every circumstance. Selecting items is an activity that we can do on Shabbat, provided we do so in the ways defined by the Torah. Stay tuned as we'll learn the big three conditions...

25. Gozez: No Need to be Sheepish
Korach 5782: Visit to Lift the Spirit
That Time The Ivy League Found A Way To Limit Jewish Enrollment
Would You Rather Be Right or Happy?
Comments
MOST POPULAR IN Jewish Law
Our privacy policy