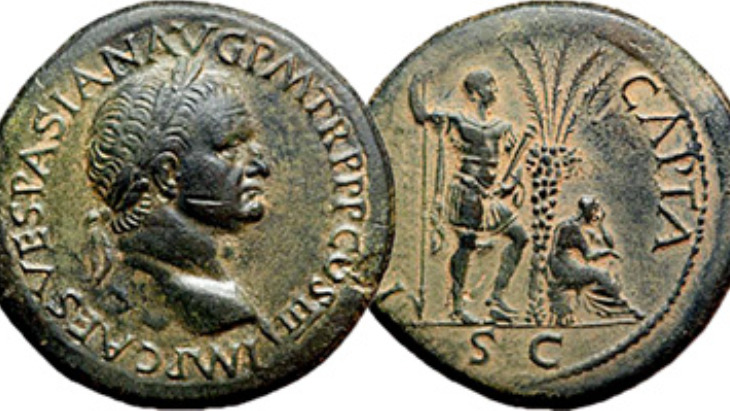 From the Roman conquest of Judea to the rebirth of Israel.

A couple of months ago I started reading James Michener’s The Source for a third time. This time, the archaeological dig at the “tell of Makor” awakened in me my old love of coins and I began to think about what it would be like to actually hold an ancient Jewish coin in my hand.

I discovered that Jewish coins of antiquity were more accessible and less expensive than I had anticipated. So I started collecting. My collection is small but growing. I have in my possession three ancient Jewish coins: one from the First Jewish Revolt against Rome; one from the Bar Kochba Rebellion; and a widow’s mite (coined by the Hasmonean dynasty). When I hold these coins I feel a connection to the Jews of the past. 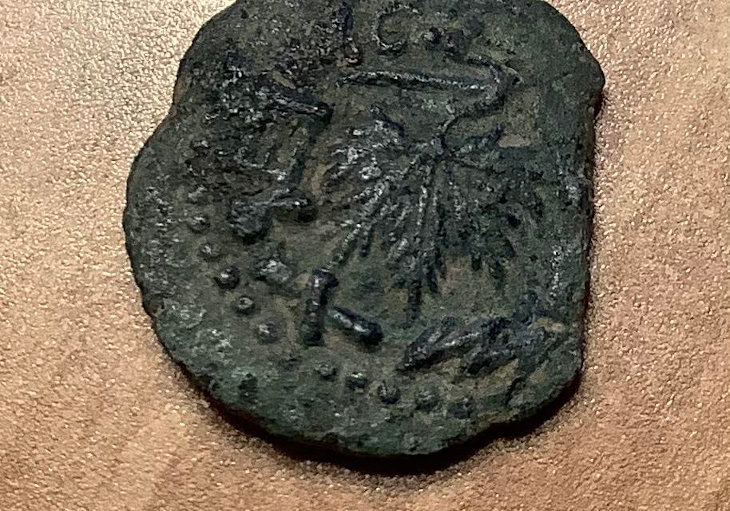 When a nation is born, or should I say reborn, one of the first things done to express independence, nationalism, and a spirit of self-determination, is the minting of coins. Both the First Jewish Revolt and the Bar Kochba Rebellion were initially successful against the Romans. So much so that before they were reconquered, the fledgling Jewish governments managed to mint their own coinage.

Both rebellions were bloody affairs. In both cases hundreds of thousands of Jews, including innocent women and children, were massacred or enslaved.

In the First Revolt (66-73 CE) the Romans conquered Judea and displaced much of the Jewish population. The war, for all practical purposes, ended in 70 CE with the siege of Jerusalem and the destruction of the Second Temple. The taking of Masada a few years later was the Jewish last military stand.

The Bar Kochba Rebellion (132-135 CE) was also a bloodbath. By the time it ended, the Jewish population had been decimated and the angry Romans, tired of Jewish insurrections, and, in an effort to forever destroy Jewish nationalism, outlawed Torah and changed the name Judea to Syria Palaestina.

During the short time I have been collecting ancient Jewish coins, I ordered and received a Roman coin (a replica) because it, to me, added much to the First Jewish Revolt story. This Roman coin was a braggart coin; one of a series of commemorative “Judea Capta” coins that were minted soon after the First Jewish Rebellion was crushed.

The face of Roman Emperor Vespasian is on one side of the above victory coin. The other side of the coin has a date palm tree, and a man standing on the left. There is a variance among this coin design. On the version above, the man stands with arms tied behind his back; he is a Jewish captive. (On other “Capta” coins, Vespasian stands proudly with his foot on a helmet.) There is also a weeping Jewish woman on the right. Some say the woman symbolizes Jerusalem; some say Judea. Regardless, the caption: “Iudaea Capta” (Judea Conquered) says it all.

To think that the horrible death and suffering of so many of my ancestral landsmen could be trivialized in the form of a victory coin - or should I say humiliation coin - pained me deeply. The Romans believed they really had the last word.

But there is a happy twist to this story. I found yet another commemorative, minted in Israel, in 1948:

On one side of this Israeli coin stands the same painful Roman image of 2,000 years ago. But on the other side of the coin is a whole different story that says, in both Hebrew and English: “ISRAEL LIBERATED 1948.” A similar date palm tree can still be found, but now there is a Jewish farmer planting a tree and a delighted Jewish woman holding her child in the air. For me, the once weeping Jewish woman has been transformed into a gleeful mother; the farmer (her husband?) plants a future.

Yes, even in the world of coins, our story lives on. Happy Birthday Israel!

Dr Eilat Mazar: Queen of Biblical Archaeology
How I Learned to Love the Multiverse
10 Big Jewish Inventions
A Journey through Jewish Sicily
Comments