Tell a Story, Raise a Child 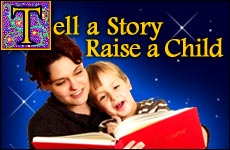 No matter how much my kids resent my daily barrage of "no's," I still have that special bond that happens every night when I tell them a story.

It's bedtime and my four children, ages 2 to 9, are sprawled out on my bed.

Elisheva, 8, is picking at a loose string in the sleeve of her nightgown. Over the past three weeks, a girl in her class has been extorting candy fireballs and loose change from Elisheva's pockets during recess. When I ask Elisheva if she has any idea how to stop the girl, she looks clueless. Clueless and resigned. As for me, I want to clobber the little extortionist.

But that would make me a poor role model, particularly for Shoshi, my six-year-old, who is lying with her head in my lap. She's been hitting lately, and now her brother and sister have been boycotting her when they play. I see her now, poking her elbow into her brother's knee, hoping to get a rise out of him.

Meanwhile Levi and I have been butting heads over the level of junk food allowed in our home. Every year my husband and I relent a little more: Okay, fritz out on the cookie, the cake, the candy, but eat a vegetable too. But he won't, and I won't give in either. So he walks around with a slouch, his eyes world-weary at age 9, and he speaks in an old man's inaudible mutter, letting me know how much he's suffering, hoping I'll say, 'Oh, just take it.' The truth is, all my kids are angry about my junk food rules.

As for my youngest, a toddler, she's fighting a death battle with herself over a sticker that has lost its sticky power.

The accumulation of slights, resentments, and frustrations weigh on me. But now, as the day comes to a close, I push these feelings aside, turn off the big light, and gather the children around me to tell them a bedtime story. The small beehive lamp casts a fuzzy,
indistinct light over the room, making it harder for Levi, at the edge of the bed, to read the Madlib he's just written. He puts the Madlib booklet aside and comes closer, as does Elisheva. I look at them and down at Shoshi still in my lap. The baby has thrown away the sticker and staggers across the room, clutching a bouquet of refrigerator magnets.

Which story, I wonder. Which story for which kid? My gaze falls on Elisheva and I notice how fragile she looks with her dark hair falling over her eyes, and then I know where to begin.

"There was a boy called Yitz who kept having to fork over his lunch to Bertha, a big mean girl in his class." I tell them a story every night, (sometimes two), a story that at least one of my kids needs to hear.

As I dramatize how Yitz tries to outwit Bertha, first by hiding the sandwich, (Bertha finds it) then by making two sandwiches, one for the bully, one for himself (Bertha takes both), it occurs to me that I've read a story similar to this years ago. I can't recall the name or the author, and hope he or she forgives how I've co-opted their plot and tinkered with it to make the story my own.

For me, storytelling is a mix and match, a hunch with a bit of heaven and earth, a grab bag of plots, themes and characters, pieces from all the stories I've ever heard coming together in a new way. And then sometimes a story drops into my head, a creation purely my own. As I go on with the story, Elisheva plays with her toes, as if she's not really listening, but I can tell by the way she nods to herself at certain parts, that she's right there with me.

I lean against the bedpost. "Finally, Yitz spreads green moldy peanut butter on bread, throws in cockroach legs, sprinkles a heaping tablespoon of black pepper, puts a dirty Q-tip inside, then sneezes on top for good measure, and voila! There's his sandwich."

"Yes," I decide in the moment.

"But how can he put cockroach legs in the sandwich?" she asks. "It's not kosher."

"Oh." I take an editor's pause. "Well, then he's not Jewish." I continue, "When Yitz sees Bertha the bully the next day, Yitz pretends to run away. Bertha catches up to him, grabs his sandwich, while Yitz yells, ‘It's my favorite sandwich, you'll hate it, only I like it!' Bertha hollers, ‘Liar!' and shoves the whole thing down her mouth."

"Ima, that's the best story I've ever heard." She says that after almost every story I tell, and there is nothing more gratifying.

The children collectively draw in their breath and flinch. I impersonate Bertha's purple face, apoplectic, gagging – after she has taken a bite. My children convulse with laughter.

Elisheva breathes out. "Ima, that's the best story I've ever heard." She says that after almost every story I tell, and there is nothing more gratifying.

Stories are my secret cache of goodies – the fresh baked brownies, the toys offered for no good reason, the surprise visit to the amusement park. I know no matter how much my kids resent my strictness, the barrage of "no's" that come out of my mouth every day – no to buying a television, no to mindless computer games, no to neon-colored snacks filled with hydrogenated oil – I still have that bond with them that happens every night when I tell them a story.

Stories comfort them. They impose a logic and structure – beginning, middle and end —on an often confusing, scary universe. I give them back their personalities and conflicts in a disguised form. Here, they have the wits and power to conquer a bully, or control a bad habit, save a drowning baby, or stop a robber in his tracks by throwing a water bomb on him from atop a flying bed. They yearn for these stories.
When I was a kid, I heard stories all the time, especially from my father who would tell me tales while he shaved each morning. I'd sit on the edge of the bathtub, watching and listening. Even in my teens my father was telling us stories as we sat around the Shabbat
table, mostly to keep us kids from breaking out into brawls. He told us about the classes he flunked, the boys he beat up, the girls he went out with, the tough teacher who signed his yearbook, "To the boy who isn't half as smart as he thinks he is."

In every story was a tiny glimmer of teshuva, of repentance, but it was buried so deep I never realized its existence until years later. My love for stories carried over into Torah study. I always loved the sections of the Torah that dealt with happenings, events, drama. When we got to the middle of Exodus, Mishpatim, which went into the actual laws, I'd get depressed until Numbers, when Eldad and Meidad started prophesizing in the camp. God knew what He was doing when He started the Five Books of Moses with a story – the story of creation. I once read that the most successful salesmen tell their customers stories. God, in selling us His book of rules and wisdom, knew He had better make things spicy to keep our attention.

Storytelling is the highest position I can occupy in my children's minds. But for how long?

I look at my children on the bed. Shoshi is about to kick Levi, and as I make a separation between them, I'm already plotting out what ‘hitting' themed story I'll tell the next night. Elisheva looks anxious, probably anticipating the bully-girl at recess. The baby has passed out, one hand still clutching her food magnets.

A phrase from the Talmud comes to mind: "More than the calf wants to suckle, the cow wants to give suck." I think of how I need to tell these stories. It hurts me not too. As long as I'm telling stories, and my children have the desire to listen, I live in a world of their innocence. I still have the illusion that I exert great influence in their lives and characters. My children still look up to me. Storytelling is the highest position I can occupy in my children's minds. But for how long? Each story leaves me with that bittersweet thought.

We all recite the Shema together. "...and you shall teach them to your children and speak of them..." After a request or two for something to drink, they move sleepily toward their own rooms, ready to surrender their day to the night, for the stories that only dreams
can provide.

Author's note: My children's ages, names and ordinal positions have
been altered for the sake of privacy.

You can visit Ruchama's blog:
www.writetogether.typepad.com
for upcoming workshops via tele-conference and
to view other articles.