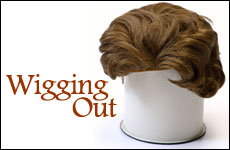 My decision to cover my hair with a wig has me feeling better about myself physically and spiritually!

“Wow, I love your hair!” the supermarket checker exclaimed. This was a thrilling change from the predictable “Paper or plastic?” question checkers typically asked and which usually encompassed our entire interchange. “I wish I could have my hair like that, all short and feathery, but my boyfriend likes it long,” she added wistfully.

As she enthused over my tresses, I was grinning like the Cheshire cat. The cut was new, and I didn’t mind a public endorsement of my choice. Beyond that, my grin camouflaged my wickedly strong temptation to lean over the check stand and tell her, “Guess what? It’s a wig!”

But I conquered the temptation and didn’t blow my cover. Why ruin the mystique? I’d been covering my hair for many years with hats or berets, but had only recently “wigged out,” so to speak. Sure, once upon a time I vowed that I could never cover my hair full time. Keeping Shabbat and kosher I could deal with; wearing a wig? Fuggedaboutit! Granted, Rebbetzin Feige Twerski writes persuasively about the mitzvah here, but I had a “should I or shouldn’t I?” relationship about the matter for years. But I finally joined the hidden-hair ranks when my first son was 3 years old, and I felt too sheepish to remind him to put on his kippah when my own hair was on display.

I bought an inexpensive wig, and felt like a fake. It wasn’t my style, and I took it out for airings only on special occasions. That mop also gave me a headache, which is a real deal-breaker if you cover your hair full-time. So I remained loyal to hats and berets, and my chapeaux collection grew to prodigious proportions. I could never have joined the military, since they only offered green berets. Mine spanned the entire color spectrum, from forest green to deep burgundy, ivories, royal and baby blues, and a half of dozen shades of brown. Most were embroidered with flowers or patterns. One has tiny copper chairs on it – it’s a real conversation piece. When I guiltily wrote another check for a new, irresistible topper, I rationalized, “At least I’m not a shoe hound! And it’s for a mitzvah!”

Still, I wished I could just wear a sheitel, Yiddish for wig. Hats could be fun, but you never have to match your hair to an outfit. Professionally, wigs let you just blend in, at least until lunch, when everyone else at the company meeting is eating what the caterer is serving and you surreptitiously nibble at your brown-bagged sandwich. Finally, I had a growing fear of ending up a little old Jewish bubbe, whose collection of hats would brand me “eccentric.” Eccentric old ladies with hats also usually have 15 cats, and I don’t like cats.

That is how I decided to risk another wig, but this time, it was going to be the real deal. No more shock mops for me, with their unnatural volume or stiffness marking them obviously fakes.

Still, it was scary to graduate to the major leagues of sheitel-wearing. What if I gambled major league money in a custom-designed, human hair sheitel and still got headaches? Oy! That would result in the kind of pain that no amount of Naproxen could dull. Despite the risk, I found myself sitting in the salon of a trusted sheitel designer. “I’m not ready for this! I’m scared!” I hollered as she plopped an uncut, long, dark brown wig on my head. “What do you think?” she asked.

“I look like Elvira. I can’t imagine how this would look after it’s cut.”

“I look like Elvira. I can’t imagine how this would look after it’s cut.” She quickly flipped through a celebrity magazine and pointed to a photo of Katie Holmes, sporting a fashion-forward bob. “That’s the cut for you,” she said. I laughed. “Katie Holmes! I’m old enough to be her, er, um, aunt!” I protested. Yet in less than an hour, I left the salon utterly transformed, the sheitel cut, washed and blow dried into a modern, elongated bob. Katie would have been jealous. “You look fantastic! So much younger!” The stylist and her assistant were staring at me, mouths agape.

I left the salon in shock, not only at how much money I had just paid but also at my striking resemblance to Katie Holmes (well, except for being oh so slightly older). I stuffed the beret I had worn in to the salon deep in my purse. Compared to my new locks, my blue beret now looked like a shmatte, barely suitable for dusting the furniture.

Hair covering doesn’t come easy to a lot of women who have chosen to keep the mitzvah. I know; I’m one of them. While I was proud to wear my hats and berets, knowing they often identified me as a member of this part of the tribe, I’m even happier to now sport a smart coiffure that lets me appear younger than my years, at least according to a recent survey of my friends and supermarket checkers. Sure, our inner beauty must always come first, but Judaism has a healthy respect for a woman’s God-given hardwiring to want to be beautiful too. With my new hair, I get to keep the mitzvah and enjoy feeling a little prettier at the same time. What a deal!

The best news of all, however, may be that my two new sheitels have rarely spiked a headache. I take this as a sign from above that going the extra mile for a mitzvah carries its own rewards.