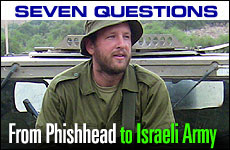 David Sussman used to be a Phishhead. The self-defined former “stinky dreadlocked hippie” was born and bred in Boston and followed the band across the U.S., taking in more than 150 shows by the time he was 23. Three years later, Sussman found himself amidst the ruins of the terror attack at Mike’s Place in Tel Aviv, where he worked as a bartender and manager. Two years after that, in 2006, he was faced with death again, serving as an infantry soldier with the IDF, on the front lines of the Lebanon war.

How does a person go from the Phish concert peace trail to the heart of the Middle East conflict? According to Sussman, pretty darn strenuously, but the 32-year-old tour guide and yeshiva student, who now lives in the Old City of Jerusalem, maintains that both life paths stem from the same desire: to connect with the world around us and make it a better place.

Q1. Where were you when the terror attack on Mike’s Place took place?

It was April 30, 2003. I had the night off. But as soon as I heard what had happened, I went there straight away. I won’t go into detail about what I saw, but it was horrific. In addition to injuring dozens of my friends, those two terrorists killed a waitress and a close friend of mine, Dominique Hass.

As it was, those were pretty hard times in Israel. Bombs were going off in malls and cafes, buses and 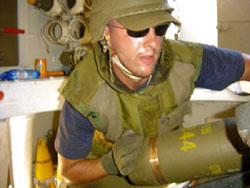 nightclubs, weddings and Passover Seders. Every week there were attacks. Tourism was down. There was little joy on the streets. The attack on Mike’s Place was the last straw for me. I decided to make aliyah and become an Israeli citizen.

I felt that by doing so I was doing my part to keep this thing that is Israel, alive. As Jews, wherever we are, we are in this together. And I wanted to show that I wasn’t about to throw in the towel. After that, at the ripe age of 27, I joined the IDF. After all, sometimes you have to fight for what is right.

Q2. How do you reconcile your hippie roots with your later identity as an Israeli soldier? Isn’t there a contradiction in philosophies there?

No. First of all, the transition didn’t happen overnight. I first came to Israel to visit my brother in August 2001 and stayed, though I didn’t become a citizen until 2003, and only then joined the army in 2004. Becoming a soldier was for me the culmination of nationalistic feelings that had developed over time. Especially after what happened at Mike’s Place, I felt the need to participate in protecting the people I loved, the city I lived in, and my country.

Being a Phishhead and an Israeli soldier have a common goal.

I don’t see a philosophical conflict between being a Phishhead and an Israeli soldier. Both have a common goal of becoming part of a community, sharing with and loving your neighbor as yourself, and both stem from a desire to connect to something deeper and more meaningful. Of course, as a Jew, an Israeli and as a soldier, I feel a much deeper sense of connection to history, to community, and to the world than I ever did as a hippie. But the quest is the same.

Q3. Did you imagine when you joined the IDF that you would end up in the Lebanon War?

No way. I was part of an artillery unit that fought in Lebanon longer than any other unit. I was there for 28 blistering hot days with no showers, no toilets, no beds. Just blood, sweat and tears, as fellow soldiers were killed all around me.

On August 2, 2006, possibly the heaviest day of fighting, there was an ambush on our position. A recconaissance unit was sent by Hezbollah to scope out our location. Until then, the rockets being fired at us would land randomly, in our general vicinity. Not anymore. We could see them coming closer and closer. Out of the corner of my eye I could see, in what seemed like slow motion, a rocket land no further than 60 feet from me. I fell to the ground, clutching my head with my hands. It was a dud. Click. My heart was racing. Before long, our whole encampment was on fire.__

I found myself putting out fires that were beginning to encroach on the area where we had stockpiled our explosives. If these went off, no one would survive. The scene that day was crazy: fire, smoke, explosions, gunfire. By the time we got the orders to retreat, 12 soldiers had been killed.

I found myself thinking what the heck am I doing here? I should be in America, for cryin’ out loud! I should be at a festival, dancing with girls who wear sparkles on their faces, not in the middle of a battle field! Why did I join the IDF? Why was I in Israel? I was about to die for this country, that I felt so connected to, but I barely understood why. That’s when I realized I had to learn more about the history of our land, and what it meant to be Jewish.

Q4. Is that why you went into tour guiding?

Yes. After Lebanon, I quit my job and decided to learn, full-time, about the country I had just fought for. I joined the Archeological Seminars school in Jerusalem. Our first reading assignment was the Torah: Genesis, Exodus, Judges, Joshua and the conquest of the land, and Shmuel and the stories of King David. Alongside the readings, we visited the sites and really got down and dirty with it, sometimes even taking part in excavations.

I discovered things that had not been seen or touched in thousands of years; uncovered history, but not just any history, Jewish history, my history. I couldn’t help but think, man, this stuff is real. It’s all right here. The archeology matches the stories. This stuff ain’t fiction, like I always thought. This wasn’t like Greek mythology. These stories were real.

I am proud to say that I am now a certified Ministry of Tourism educator and guide. This is definitely the career for me. Now I spend a chunk of my time taking families around Israel in the hopes of inspiring them to connect, the way I have connected, to this amazing country, and fill them with the pride that every Jew should feel for who they are, the gifts their ancestors bestowed upon the world, and the wonderful accomplishments of the modern state of Israel even in the face of terrorism and the constant threat of war.

Q5. How else did the war impact you?

It inspired me to eventually go learn in a yeshiva. There I was at the age of 29 and about to die, and all along I didn’t really know what I was living for. Amidst the chaos of that day during the Lebanon War was this tank driver, an 'ultra-orthodox' Jew who even brought his black hat with him to battle. I thought he was nuts, until I got to know the guy.

Hot coals were falling into the tank which was covered with explosives and gun powder.

So we were all sitting in this tank and for some reason the top wouldn’t close. From inside the tank all I could see was trees burning overhead and ash. Hot coals were falling into the tank which was covered with explosives and gun powder. One guy was on his knees inside the tank, clapping out the coals before they hit the floor and ‘Boom!’ – we'd be no more. We were white in the face, with fear in our eyes.

And the whole time this driver was singing. Singing songs! 'Am Yisrael Chai, Am Yisrael Chai.' I knew right then that this guy had something I didn’t, and it was something I wanted. At the time, I just didn’t know what it was.

That inspired me to look deeper into what it meant to be a Jew, and with the background I had learned in guiding, I was already partway there. I followed my curiosity and began exploring the stories behind the stories I had learned.

Q6. What was one of the most important things you learned in yeshiva? 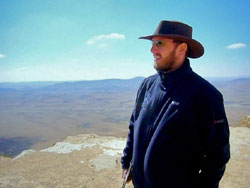 I try to live my life true to that ideal and stay constantly conscious of the things I live for, and devote myself to them. I think that’s how you make a difference in the world. When you really connect to the things you care about, it makes the world a better place.

Q7. Do you ever get itchy for your Phish-following days?

It definitely happens, for sure. They are still one of my favorite bands. And I have lots of fond memories of those days. But the connection I have found in Israel is much more fulfilling. Sometimes when I look back at my Phish days, I feel like I wasted time. There was a lot of great energy there that never really went anywhere, never accomplished anything. There would be this explosion of energy at concerts, but they always ended flat. With Judaism, I feel like I've tapped into something real, long-lasting, even infinite. Living in Israel as a religious Jew provides a framework with boundaries to contain that energy, and now I feel I am investing my energy much more wisely, toward a real greater good, toward ‘tikkun olam’, trying to truly repair the world.

The People of Israel
Chukat 5782: Let’s Play the Blame Game!
The Sin of Moses: The Two Ways to Communicate
In Aftermath of Chicago’s July 4th Shooting, Local Moms Provide Countless Points of Light
Comments
MOST POPULAR IN Israel
Our privacy policy