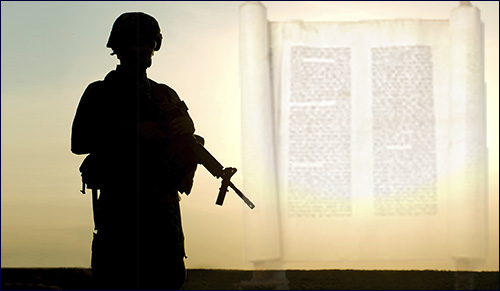 A new Torah scroll for the U.S. military re-writes a legacy. 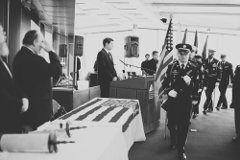 The color guard marches during an Oct. 12 dedication of a Torah scroll for the U.S. military at the Museum of Jewish Heritage in Manhattan. At the podium is Jacob Kamaras, and at left giving a salute is his father, Philip Kamaras. Credit: Alexa Drew Photography.

Have you ever seen your name engraved on a tombstone? It’s almost an out-of-body experience. Death stares you in the face. Of course, the grave belongs to one of your family members, but the fact that your name is etched in stone is inescapably personal. You ask: When will it be my time? What happens between now and my end? Who am I? Why am I here? Who will I become?

Fifty years have passed. I’ve been alive for 28 of those years. During that time, my grandfather has remained mostly a mystery to me. He has been defined by his absence – primarily, the fatherlessness experienced by his children from a young age. But on Oct. 12, 2014, a different narrative on Jacob came to the fore.

It had been my father’s desire to mark Jacob’s 50th yahrzeit by commissioning the writing of a Torah scroll in his memory. A Torah leaves a tremendous physical and spiritual legacy. Our 613 commandments – the guide to the Jewish way of life – are all there to be seen written in ink on parchment. Each Monday, Thursday, and Saturday, and on Jewish holidays, we bear witness to those commandments by reading portions from the Torah at prayer services. Both the physical scroll and its message are passed down from generation to generation, and over time, the Jewish people are inextricably linked by tradition.

Who should receive a Torah written in Jacob’s memory? That was no easy question for my family, but after giving the matter serious thought, it was clear to me that because Jacob was a U.S. Army veteran, Jews serving in the military should benefit from a Torah whose creation he inspired. My father agreed. And in fact, I was already aware of a program established for this purpose. 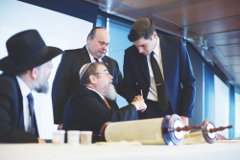 On Oct. 12 at the Museum of Jewish Heritage in Manhattan, Jacob Kamaras (right) and scribe Zerach Greenfield complete the final letter in a new Torah scroll for the U.S. military. Behind Greenfield is an emotional Philip Kamaras, Jacob's father. At left is Rabbi Yisroel Reisman, leader of the Agudath Israel of Madison congregation. Credit: Alexa Drew Photography.

When they visit Jewish troops, U.S. military chaplains often find themselves without Judaism’s most essential ritual object – a Torah. The Jewish Welfare Board (JWB) Jewish Chaplains Council, a program of the Jewish Community Centers Association of North America, has 60 Torahs at major military installations around the world. But since these full-size Torahs are too large to transport with ease, the JWB in 2009 established the “Torahs for Our Troops” program to address chaplains’ needs in the field and aboard ships to have small scrolls that accompany them from site to site. Four of the lightweight Torahs commissioned by the JWB have been used in Iraq, Qatar, Afghanistan, and on ships. The fifth such scroll, which my family donated, is slated to ride aboard the USS Gerald R. Ford (CVN-78) aircraft carrier. (My family subsidized a mid-size Torah scroll, a size that works well for ships. Due to the changing needs of the military, the writing of smaller scrolls such as the first four commissioned by the Torahs for Our Troops program is no longer a priority.)

On Oct. 12, my family hosted a dedication for our Torah at the Museum of Jewish Heritage in Manhattan. It was an unforgettable day. Members of all branches of the military – Army, Navy, Marine Corps, Air Force, and Coast Guard – were on hand for the color guard. “Taps,” the unmistakable musical piece known for being played at military funerals, rang through the air. Rear Admiral Rabbi Harold Robinson, director of the JWB Jewish Chaplains Council, recounted inspiring stories of Jews who served in the military. The sofer (scribe) completed the Torah’s final letters, and we sang and danced with the scroll to celebrate. My sister presented a moving video she produced about Jacob’s life and legacy.

In my speech, I addressed a question that consumed my thoughts leading up to the event: What’s in a name? Like my grandfather, I have no English middle name, but I do have two Hebrew names: Chaim Yaakov. My lack of a middle name isn’t lost me. There’s always a blank space where the middle name should go. For me, that represents Jacob’s absence and my duty to fill that void. Then the fact that Chaim, meaning “life,” is part of my Hebrew name can be taken literally – I am Chaim Yaakov, or as I’d like to think of it, “Life of Jacob.” My name is my life. It’s who I am. It represents my family’s past, my own present and future, and my family’s future.

In the face of war and adversity, Jacob’s Torah will give our soldiers new life, new meaning, and new inspiration.

A name can derive from a variety of inspirations – a deceased family member, a life experience, or simply an appealing entry in a book of names. Regardless of the scenario, every name has a story, and I believe it’s one of our jobs in this world to craft that story as our lives progress. For me, the story of my name is fairly obvious from the outset, but the story continues to evolve.

My family’s newly dedicated Torah scroll is undoubtedly an important chapter in that story. The new Torah is not only a fitting tribute to my grandfather the veteran, but it also represents the re-writing of his legacy – which was previously defined by his absence. This Torah exists because Jacob served our country in the military. This Torah exists because Jacob and his wife Sylvia started a family that was able to support its creation. Now, this Torah will allow Jews to exercise the privilege of religious freedom at the most crucial time, while they defend America. Although tradition looks forward to a time when all Jews settle in the land of Israel, the Jewish people survive and thrive because of their current devotion and endurance in the Diaspora. As it travels on the Gerald R. Ford aircraft carrier, my family’s Torah will be no small part of that journey.

My grandfather’s story is no longer about the tombstone bearing my name. Jacob’s legacy is about life – the English translation of Chaim, the first part of his Hebrew name. In the face of war and adversity, Jacob’s Torah will give our soldiers new life, new meaning, and new inspiration. It’s a legacy defined not by absence, but by enormous presence.

Jacob Kamaras is the editor in chief of JNS.org.

The Courage to Search: How My Questions Led Me to Embrace Judaism

Growing Up Sisters
For Every Individual, A Torah Scroll
Allegiance To The Monarch
Meet the Real You: Yom Kippur
Comments
MOST POPULAR IN Spirituality
Our privacy policy
Aish.com Is Looking for Great Writers