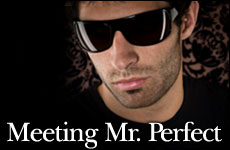 What do you say to the man of your dreams?

I cringe whenever I think about it. In fact, I'm cringing now.

It all started years ago when I was living in Los Angeles as a single Jewish woman in my mid-30s (if you consider 37 a mid-point, which I most certainly did at the time). Things were pretty bleak on the dating front, so I did what I often did in difficult or boring times of my life, I began to daydream. A lot.

Since I was a kid, I've always had a very rich fantasy life. Sometimes they were realistic fantasies that pushed me to try harder for something I wanted. Sometimes they were very unrealistic fantasies that just gave me a fun and entertaining focus for a few minutes. The daydreams which began in my 37th year, about a certain movie actor, were obviously in the latter category. He was a nice-looking guy, and a very talented actor, not really a "movie star," but definitely up and coming.

I had some fantasies about me crossing his path and totally turning him on to Judaism.

But what caught my imagination was finding out that his mother was Jewish. He wasn't raised Jewish. In fact, he probably never gave it a second thought. But I did. Because if he was Jewish, then, theoretically at least, we could get married. Okay, I'm laughing, too. But at the time, I had some very fun little fantasies about me crossing his path, usually on a plane from L.A. to New York, and in the course of our conversation, I totally turn him on to Judaism. We start learning Torah together, become friends, and eventually it turns into dating and marriage.

Shortly after I began this particular line of distraction, my real life kicked into full gear, and I quickly dropped Mr. Movie Actor. I had just met a real guy and no longer needed a dreamy time-filler. Real Guy and I got engaged and my life started to exceed any fantasy I could have dreamt up. Then the bottom dropped out and Real Guy called off the engagement (read "Seeing God in Your Rearview Mirror" for details).

After moving to New York City, I began trying to heal my broken heart. I once again turned to Mr. Movie Actor for help. He would never let me down. Every conversation we had (in my head, of course) was profound, witty and sincere. Every time we met for the first time, usually on a plane from New York to L.A., but sometimes while I strolled my friends' baby through Riverside Park, Mr. Movie Actor saw immediately into my deepest soul.

In my fantasy, he was, of course, becoming Torah observant, which meant that he no longer worked on Shabbat. And when he took me to his movie premieres, I caused a minor sensation in my modest dresses, setting an example for women all over the world.

During this time, I dated a lot of men. Actual men. But unfortunately, none of them stood a chance against the perfect husband I had created in my head. In fact, many people create some kind of fantasy of what they think they want in a marriage partner, which often stops them from opening up to finding their actual soul mates. Mine was just a little more famous. And he was getting in my way.

Then the craziest thing happened. I was scheduled to fly down to Florida from Kennedy airport, but not wanting to shlep to Queens, New York, I changed my flight to leave from Newark airport, 20 minutes away. Was it God that found my new flight for me? Because as I was buying a magazine from the airport kiosk, who should walk by me but none other than Mr. Movie Actor. For real. I couldn't believe it.

Could he really be on my flight? I was sure my fantasy would finally become a reality.

My eyes followed where he was walking and sure enough he sat in the area in front of my gate. Could he really be on my flight? This was it. I was going to sit next to him, I was sure, and my fantasy would finally become a reality. Just one thing stood in my way. In all of my daydreams, it never occurred to me that he would be sitting in first class. But in reality, that's just what he did.

As I watched him board early on the plane, I realized I had just one chance to flash him my most killer smile, as I walked past him in the aisle on the way to economy class. He would see my sincere, sweet expression and look right into my soul, just as planned. Unfortunately, as we boarded, I noticed that the entrance door was between first class and the rest of us shlubs, with a closed curtain separating us. My dazzling smile froze uselessly on my face, and then melted.

All through the flight, I tried to figure out how I was going to meet him. After all, God never would have created this incredible miracle, if it weren't meant to bring us together for real. So when the flight landed, I rushed to the front of the plane, and ran down to baggage claim. Maybe it was there that we would finally meet.

Sure enough, Mr. Movie Actor and I were the first ones there waiting for our bags. We were standing near each other, and I was acting casual. He didn't notice me behind his movie star sunglasses. I was trying to get up the courage to say something. I knew that whatever I said had to be brilliant, witty and help him see right into my soul.

I was so nervous; after all, this was my potential husband, right? But in my head, I knew that we had had hundreds of conversations, and he already knew how witty I was and how we could tease each other. So, in my most charming, sweet and playful voice I said, "You're not fooling anyone behind those glasses."

I know my words sound rather invasive and rude on paper, but honestly, I said it most endearingly. I just knew that my Mr. Perfect would smile and look into my soul and say, "I would never try to hide from you," or some other equally mushy sentiment.

Instead, his cold, harsh reply shut me down completely. "I'm not trying to fool anyone. I just don't want to be bothered."

I got to see that my perfect fantasy isn't real and that reality isn't about perfection.

Had he not heard my teasing tone? Was he not charmed by my endearing smile? In my imagination, we had shared so much wonderfully witty banter and he adored me. But there, in the airport, Mr. Movie Actor had completely misunderstood my intentions. Mr. Perfect would have understood that I was just trying to be funny and cute. Then I realized that Mr. Movie Actor was not the same as the Mr. Perfect I had concocted. My fantasy came crashing down.

I obsessed about this incident for days afterwards. At first, I didn't really understand why God put him in my path if he was not my Mr. Perfect and future husband. And then I got it. God was giving me a wonderful gift -- to see that my perfect fantasy isn't real and that reality isn't about perfection. Now I could finally begin living again, and open myself up to giving an actual guy, with flaws and all, a chance. Maybe he wouldn't be perfect, but at least he would be real.

Eventually I did meet my true soul mate. He isn't rich or famous, but he is better than any fantasy I could have had, because he is real. And you know what? When we first met, he looked straight into my soul.

PODCAST: Are My Pre-Wedding Jitters the Sign of a Doomed Marriage?

Ten Ways to Marry the Wrong Person
Why My Iranian Mother Didn’t Want Me to Become a Religious Fanatic
The Jewish History of Prague
Why the Sexual Revolution was Bad for Women
Comments
MOST POPULAR IN Dating
Our privacy policy
Aish.com Is Looking for Great Writers