A Rabbi Walks into an AA Meeting 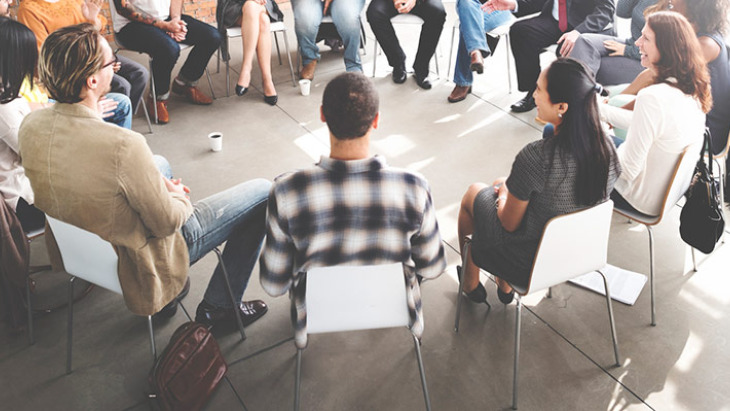 And walks out with a greater connection to God.

Two years ago, a wonderful young person I know began to spiral downward. Though he couldn’t see it or admit it at the time, alcohol was seriously hindering and sabotaging his life. A few of their very close friends and I coordinated to confront him in an attempt to help him. Fast forward to this week – those friends and I attended an open AA meeting to celebrate as he received a medallion recognizing two years of sobriety.

I have had the privilege of attending recovery meetings before to celebrate milestones of sobriety and each time I have walked away extremely proud of the celebrant, grateful and humbled to have been included, but most of all, enormously inspired. I don’t know a room of people that are more vulnerable, genuine, raw, and more united in their effort to tackle a self-destructive urge and inclination.

Parts of the standard AA meeting are consistent and the same while others change and fluctuate. This particular meeting focused on the third step of recovery - “Made a decision to turn our will and our lives over to the care of God as we understood Him.”

At the core of recovery is a recognition that we cannot do it on our own, that we find the strength by relying on God.

At the core of recovery is acceptance and submission to God, a recognition that we cannot do it on our own, that we rely on God and can only find the strength to endure and persevere if we attach ourselves to Him. In the heart of the meeting, attendees have the opportunity to share. I was blown away by the insight, depth and sincerity of those who opened their hearts.

One young man, relatively new to recovery, talked about how he always saw religion, God and prayer as something for the weak, for those who need a crutch and can’t do it on their own. Each time he stumbled, each time he fell, he continued to choose fear over faith. Only when he hit rock bottom did he realize that surrendering and submitting to God is a sign of strength, not of weakness. He began to pray daily and though he was an atheist his whole life, he now realizes that the only way he can find the strength to stay sober is by choosing God.

I was reminded of the story of a young girl and her father who were walking along a forest path. At some point, they came across a large tree branch. The girl asked her father, “If I try, do you think I could move that branch?” Her father replied, “I am sure you can, if you use all your strength.” The girl tried her best to lift or push the branch, but she was not strong enough. She said, with disappointment, “You were wrong, Dad. I can't move it.” “Try again with all your strength,” replied her father. Again, the girl tried hard to push the branch. She struggled but it did not move. “Dad, I cannot do it,” said the girl. Finally, her father said, “My daughter, I advised you to use 'all your strength,' but you didn’t. You didn't ask for my help.”

Using all of our strength means seeing ourselves as dependent, not independent, as needing God, not living without Him. A woman described her last memory when addicted to alcohol was yelling and cursing at her young daughter who was asking her not to take the next drink. She ended up in rehab, worked the steps including this third one, and when she surrendered to God and turned to Him for help, her life turned around.

She shared that now she prays twice a day, expresses gratitude regularly and always asks God for help. Sometimes she asks for help to be honest that day, sometimes to work hard, other times to overcome the urge and impulse for self-destructive decisions and behaviors. Each day, after she prays, she spends a few moments in meditation. She described that when she prays, she is talking to God and when she meditates, she clears her mind, listens, and feels He is talking to her.

As I sat there listening, I thought about our regular meetings called minyanim and our daily prayers. Are they the exercises in humility and personal growth they were meant to be? Do we close the prayer book and feel we have spoken to God and have heard Him speaking to us? Have we taken the step of surrendering and cleaving to God?

The authors of the Silent Amidah, the Men of the Great Assembly, had a divine inspiration in composing a prayer that would capture the universal needs of mankind transcending time and place. We utilize their formula daily to articulate our gratitude, dreams, aspirations and needs.

But they never intended on their words being the sum total of our prayers. They offered the template, and we are supposed to fill in the blanks, we are meant to write our own personal, individual thoughts, feelings and needs in between the lines. I have always thought of it like the cards we give on major occasions. If I write heartfelt thoughts on the back of a napkin and give it to my wife on our anniversary, it is a nice gesture, but the failure to buy a card dampers the efforts. If I buy a greeting card and give it to my wife but I never fill it in or write anything personal, it is a good start but clearly incomplete and lacking.

We must recite the liturgy, read the inspired script each day to benefit from the brilliant formula. But turning in the words of the prayer book without personalizing them, without a sincere conversation with our Creator, without expressing our specific gratitude, needs and requests is incomplete and deficient. It isn’t that God needs more, it’s that we do.

Whether during praying, while driving, cooking, exercising or simply sitting still, talk to God in your own words, ask Him for help with what you need that day, thank Him for the blessings and gifts in your life and when you are done, spend a moment in quiet meditation and see if you can hear Him talking back to you.

I ran out of the meeting late to my next appointment. I got in the car and instinctively grabbed my phone to make a call. But then I remembered what I had just heard and decided to make a different kind of call, one that required me to turn my phone off, not on. I spent that short ride talking to God and let Him know among the things I was and am so thankful for, was being at that meeting.

What Will They Say About You?

How to Conquer Anger

Six Ways to Conquer the Fear of Beginnings

Israel’s Rollercoaster
What Makes Eli Run?
The Tyranny of Materialism
Science Enters the Mysterious Inner World of Consciousness
Comments
MOST POPULAR IN Spirituality
Our privacy policy