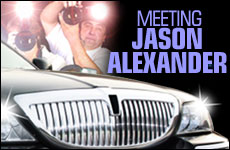 Why is it such a thrill to meet a real, live celebrity?

There are times when something rather ordinary happens and in a matter of seconds clarity reigns. Such was the case a couple of weeks ago. It was a Wednesday.

I rushed into the prominent and clamorous study hall and quickly found my seat. The clock read 10:05... late again. I'd been coming late to my daily morning study period and was eager to get going.

To my left sat Moshe, a dedicated, consistent and prominent scholar, who has been my "neighbor" for many a year. Among Moshe's varied interests is teaching/mentoring teens, who have had little formal religious background or instruction. This particular morning it was Isaac who was laboring over an obviously alien text. The language was part Hebrew, part Aramaic, but to him it all seemed Greek. To me, Isaac looked about 14, but nowadays who knows?

Twenty minutes must have gone by when Moshe determined that a break in his learning with Isaac might be particularly timely. Wanting to impress Isaac with the notion that "rabbis" also live very much in the modern world, Moshe directed Isaac's attention in my direction.

"See that fellow over there," I overheard. "He writes books and makes movies. He even knows Jason Alexander."

A few years previous I had the occasion to spend lunch plus, with the real-life George Costanza of Seinfeld fame at a seminar in Los Angeles.

"Do you really know George?" asked Isaac, obviously enamored by the prospect of having an ‘in' to such a famous celebrity.

"Well," I stammered, "put it this way. Would you like to meet Jason Alexander?"

I thought his eyes were going to dislodge from their sockets.

"Are you kidding?! You could really arrange that?"

"Well now...slow down...I'm not at all sure I could arrange that. But if I could, I would only do it on one condition."

"All you need to do is answer one question for me," I told him. "Then I'll look into arranging it."

My feeble disclaimer had obviously not even registered. There was not much that was going to deter this young man from even a remote chance at his date with fame and destiny. He just needed to know what it would take to make this happen.

"All you need to do is answer one question for me," I told him. "Then I'll look into arranging it."

It sounded so simple. Just one question...one answer...and his voyage to renown could begin.

"Just tell me, Isaac. Why do you want to meet Jason Alexander?"

Isaac just stared at me. The quiet lasted at least five seconds. Then he broke it.

"I know you do, Isaac. I just want you to think about why you do."

More silence. This time it must have been seven or eight seconds. And then he responded.

"You know what? Let's just forget it."

It was my turn to be silent. I looked at Isaac, astounded. "What just happened here?" I wondered to myself. "This was something that he wanted so much. All he needed to do was ponder his true motivation for meeting Mr. Alexander. How long would it take? Just come up with an answer...any answer." And Isaac would not.

But the whole exchange did get me thinking about why anybody would want to meet a celebrity. Admit it. Who of us would turn down a chance to shmooze with Bruce Springsteen; take a walk with Michael Jordan or a picture with a Senator or the President?

And yet, how many of us ever stop to wonder why it should matter so much? Why do throngs of fans clamor to just stand close to actors, athletes, the royal family, politicians, and personalities?

I believe the answer is a very spiritual one. And it is the same answer to the question so many people ask about prayer. That one usually goes something like this.

"You supposedly pray to God because He is so mighty, and omnipotent, and eternal and all that. But does that make any sense? Why (in heaven's name) would a God that is so very powerful need little old you to pray to Him? Isn't that silly? You spend half your prayers extolling His unlimited virtues. Of what possible purpose could that be? He certainly knows (by now) that He is exalted and lofty and glorified and exalted and eminent and grand and exalted and majestic and imperial and also exalted. Why go on and on? And, by the way, why are you screaming sometimes? He can certainly hear you?"

There are many who ask these questions and truly wonder what all the noise is about. Apparently, they never attended a major sporting event, concert, or political rally.

The barricades have been erected for hours, sometimes days beforehand. The security folks are out in droves. Their job? Crowd control. Why? Because the masses can easily become mobs. The potential frenzy that can, and often does occur when the STAR arrives can literally become dangerous. People who are otherwise normal, sane, even sedate and unassuming are transformed into wild hyenas:

If only Larry would so much as turn around, or if Carlos would just acknowledge us with a tiny wave of his glove or a tip of his cap -- we would completely lose it. We'd be boring our friends with "the story" for days on end... as if there would be a story. But they really don't acknowledge us, do they? They probably don't even hear us, let alone care that we exist. But does that deter us from singing their praises and howling their names? Certainly not.

We are attempting to attach ourselves to something or someone that we perceive as being greater than ourselves.

Why? Because this is something that we need to do. We certainly don't do it for the celebrity in question. He just goes about his business (whatever that is). But we are attempting to attach ourselves, in any way possible, to something or someone that we perceive as being greater than ourselves. It is, as if by association or osmosis, some of their greatness will magically rub off on us. It is the same dynamic as rooting for your team to win; as if they have somehow morphed into your team.

It is a sublime yearning to fasten ourselves to a being of a higher calling; to tether our souls to someone or something that dwells on a higher plane than we do.

Today it might be Brad Pitt; tomorrow it could be Jennifer Hudson. For some it is Tiger Woods, for others it is Cate Blanchett, or whoever the lords of People magazine decide to deify this week. It doesn’t really matter. These personalities are but mere instruments in our empyreal attempt to borrow a morsel of associative greatness.

And that is why we pray. It is a bonding experience for us, in our supreme desire to be close, as it were, to our All-Powerful Creator. So we praise and we proclaim and glorify and yes, we exalt too, so we can belong -- for even a short time -- in His omnipotent shadow.

Isaac, you probably won't get to read this. That's okay. And there is a better than even chance that your rendezvous with Jason may have never happened anyway. It was, after all, a long shot.

But you need not be too disappointed. There is another meeting that I could arrange for you that has the potential to accomplish the very same thing. I'll give you a hint. He's not a hockey star, or a vice president, or a character on Seinfeld. And you can leave your camera at home.

The Shema: Why We Cover Our Eyes

God Makes a House Call
Bechukotai 5782: Divine Retribution
Behar 5782: Working to Live or Living to Work?
The Wholeness of Being Broken
Comments
MOST POPULAR IN Spirituality
Our privacy policy