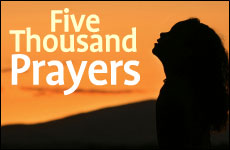 As my brother lies in a coma, I gain hope from the blink of his eyes.

Shavuot is a bittersweet holiday for my family. Six years ago on Shavuot my beloved niece was born. Five years ago just prior to Shavuot, her father, my brother Akiva, was in an accident. By the time the medics were called his brain had been critically deprived of oxygen and he lost consciousness. Akiva has been in a coma ever since.

And so, over the past five years my family has waited. Many things have changed. Siblings have married and had babies. His little girl learned how to run and sing and pray. All the while Akiva lies unconscious without our having any idea what is going on in his mind.

He said that Torah study set his heart on fire.

In a way it is ironic that the accident happened at Shavuot time. Akiva was a tremendous Torah scholar, studying at times 18 hours a day. He once described to me how it feels to study Torah and concentrate with that kind of consistency and passion. He said that it had the power to set his heart on fire.

The hardest thing about having my brother in a coma is to keep praying, constantly, waiting for some sign of recovery... and then going back and praying again. Rabbi Yisroel Reisman once said that one of the hardest things in life is to pray for the same thing more than once and still maintain the belief that our prayers have power.

The Talmud tells us that Moses prayed 515 times to be able to enter the Land of Israel, and that if he had prayed just one more time he would have been successful in achieving that goal. Not that I can compare, but I calculate that I must have prayed for my brother's recovery over 5,000 times in the past five years-- and that's not counting all the prayers of our family, friends, and the many strangers that joined in the effort. How does one keep davening faithfully for the same thing thousands of times and really feel like this time will make a difference?

The Harvard psychologist Daniel Gilbert, in his best-selling Stumbling on Happiness, discusses the phenomenon that when people imagine the future, it is very difficult to visualize it being much different from the way things are now. But can we ever see situations or people really change? With prayer one of our challenges is getting out of our limited world-view and envisioning a different reality that is possible only with God's all-powerful help. The advice that Gilbert offers is to use other people's experiences to predict the future instead of imagining it.

In Jewish history we have powerful examples of people waiting and waiting for a salvation, and then when everything seemed most hopeless it finally came. I am sure that the biblical Sarah never felt that her prayers for a child were in vain, and she waited for 90 years. Then suddenly things changed, and the future of the Jewish people began.

In our time, too, when a couple has a baby after many years of trying, we are inspired anew at the power of a personal miracle. We are reminded that a personal trial does not last forever, even if it often feels that way when we are enduring it.

The ultimate comfort, however, while we are still waiting, is to remember that suffering has a purpose. My brother had many painful medical problems growing up, and he once told me (when I was going through a difficulty in my own life) that if he had never gone through his illness, he would just be an "ordinary" person. Instead it is clear to me that his suffering led him to analyze his purpose and goals in life, and ultimately it is what inspired him to become the great person that he is.

Another consolation during Akiva's illness is to reflect on how much his situation has inspired those around him to grow -- praying and doing mitzvot in the merit of his recovery. Last year my family organized a project asking hundreds of people all over the world to devote extra learning time on Shavuot on Akiva's behalf, since he could not do so himself. This year once again we are asking people to dedicate a little extra Torah learning on Shavuot night in the merit of a speedy recovery for Akiva Shamai ben Ahava Rivka.

After hundreds of years of disconnection, we crossed the sea and stood at Mount Sinai.

The holiday of Shavuot is reminiscent of the time when the Jewish people were enslaved for hundreds of years in Egypt, not connecting with their purpose and potential, nearly devoid of hope. And then, within a matter of 50 days, we had crossed the sea and were standing at Mount Sinai receiving the Torah, being charged with a mission that would impact the world forever.

One of the quintessential features of life is the possibility of hope. When I see my brother lying in a coma, I don't see Akiva, but rather a physical representation that is with us while we are waiting for his full life-force to come back. And in that representation lies our spark of hope.

The Sages say that "God's salvation comes in the blink of an eye." As I stand by Akiva's bedside and watch his eyes blink, waiting for that hint of communication, I hold on to that hope... and pray.

Kiki is a PhD student studying clinical health psychology at the Ferkauf Graduate School of Albert Einstein College of Medicine and Yeshiva University. She lives in Brooklyn, New York with her family.