Just Pray for It 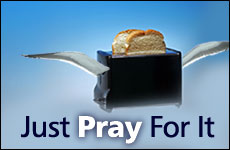 How to receive your daily needs, and small appliances, too.

Around the time my late ex-husband and I got engaged we met a preacher and his wife who were visiting Israel. They were very warm and friendly, and as they lived in the Bible Belt, they invited us to visit them on our manic six-day honeymoon drive from Los Angeles to New York where my husband would be starting his internship.

We took them up on their offer and stopped by to visit their cozy cabin in the woods, which was accessible only by a large truck with big wheels. In the course of the visit, our preacher friend told how he always got things by praying for them. He needed a stove, he prayed for it. He needed a fridge, he prayed for it. And these things showed up on his doorstep, literally. While I have never underestimated the power of prayer, to my mind, appliances were always something you "paid for, not prayed for." My husband and I just assumed that his congregants had heard what he had been praying for, and bought it for him.

We'd get all their furnishings -- but no carpeting.

As we were going to live in New York and starting from scratch, providentially my husband's aunt and uncle were in the midst of selling the contents of their home and packing up to retire to Florida. We were to be the beneficiaries of their furnishings. My husband listed everything they were planning to give us including a living room set and a desk but, he said, there was no carpeting. He smiled and said with a glint in his eye, "We'll just pray for it." That became the running joke as we cleared the kilometers to New York.

We arrived safe and sound to find our new furniture waiting for us to find it a home. There was a lovely living room set and there, rolled up and propped against the couch was a large almost new cream-colored rug. We burst out laughing.

Rabbi Noah Weinberg says that one of the keys to successful prayer is to anticipate that God wants to help you. After all, God created the universe. The Talmud says that God created the universe specifically for each one of us. And he can give you anything you ask for. Anything you could ask Him for is infinitesimally small compared to what He has already given to you. But we have to believe and trust that He can and will.

Rabbi Paysach Krohn, a popular author and speaker, has recently spearheaded a campaign, "Counting Your Blessings and Making Your Blessings Count." The aim of the campaign is to increase awareness of the importance of saying 100 blessings each day, as a merit to be spared from misfortune. When we make a blessing, it increases the level of blessing in the world and it replenishes the thing we are blessing. (I like to think that when I make a blessing on chocolate, it ensures there will be an ample supply in the world.)

Everyone laughed except that one man.

Esther Stern, in her book, "Just One Word, Amen," illustrates the power of merely saying amen to another person's blessing. The most remarkable story is about a man who had been in the synagogue as a young man when they blessed the new month. It was a month when the moon appears exactly on the hour -- an event that occurs only once every 80 years or so. The rabbi said, "We should all live to make the blessing the next time this occurs!" Everyone laughed except that one man. He said "Amen." Today, he over 100 years old and did in fact live to make the blessing again.

Since the day that my husband and I visited our friends in the wooded mountains in the South, Judaism has taught me much about the power of prayer. Yet as I've made my pilgrimage deeper into Judaism, that story has always lingered at the forefront of my mind. Sometimes God guides you to the most remote places to discover the most essential and irrefragable truths about Judaism from the most unlikely sources.

I have not seen the country preacher and his wife since that fateful visit. I'm sure they're still praying for their daily needs, and I have come to learn to pray for mine as well -- whether it's health, happiness or a new toaster.

Mayanot on Prayer #2: Our Father, Our King