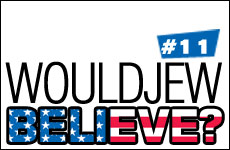 Odd and interesting facts such as...Abe Lincoln Jewish? No way!

ABIE LIN-COHEN?
That's what my bubbe called our 16th President. (Then again, she also thought Sid Caesar made a shiddach with Cleopatra.) Oy, would Bubbe be "I-told-you-so-ing." Rabbi Jeff Kahn, of Temple Har Shalom in Warren, N.J. has stirred quite a debate with his contention that Abraham Lincoln may have been a landsman!

Abraham Lincoln may have been a landsman!?

The Case For "Maybe"...
Rabbi Kahn points out:
*Not only was Lincoln's name "Abraham," his great-grandfather was "Mordechai."
*Despite his strong spiritual conviction, he was the only Prez not to declare himself a follower of any specific religion. He referred to his belief in The Ten Commandments.
*Lincoln, England, the home of his ancestors, had, at times, a highly cordial relationship with its
Jewish population (dating back to 1159). The Sheriff protected Lincoln's Jews from rioting Crusaders. More, the celebrated Bishop of Lincoln, St. Hugh, encouraged a love of Jews. While it's assumed that the Jews of Lincoln left in 1290, perhaps some remained as "Conversos," secretly passing down their true heritage.
*Jewish communities sat shivah following Lincoln's assassination. Rabbi Isaac Mayer Wise, said at his eulogy: "... Lincoln believed himself to be bone from our bone and flesh from our flesh. He supposed himself to be a descendant of Hebrew parentage. He said so in my presence."

The Case Against "Maybe"...
*The names? No big deal for the day.
*Lincoln talked of The Ten Commandments, but, so did Christians. His parents were Hard-shell Baptists. While President, he joined the NY Avenue Church in DC. There's a plaque by his pew.
*If he came from Conversos, why didn't his parents/grand-parents come out of their Yiddishe closet in the New World?
* If Honest Abe made this admission to Rabbi Wise, why only to him? No one else could verify.

The emmes? Affinity, "maybe," but blood? I doubt it. However, it does raise another question: Despite Jewish contributions why are there no National holidays recognizing us? (NO, Christmas doesn't count.) But where is Moses Day, with a National Burning Bush? I say we proclaim March 14, Albert Einstein Day (his birthday), both in recognition and inspiration! Hey, if a child dumkoph can turn wunderkind, anyone can "Jew" it, too! Heppy Einstein Day!

THE ART OF AFFLICTION?
Pesach is almost upon us, when we prepare to buy cartloads of Matzo for the ritual of "eating" (as usual). Two years ago, some savvy, creative college kids bought cartloads for something not so usual. In fact, they bought it for something never done with the serrated stiffies in the 3,000 years since we fled Egypt. It became the stuff of art!

In March, 2007, Manischewitz sponsored a Matzo Sculpture Competition, where finalists showed their entries at New York University. The theme was "Home," and the competitors went "crackers" with their creations.

There were matzo candlesticks, a matzo Western Wall, a matzo video game (mini matzo Mario, of course), and models of rooms a contestant helped restore in New Orleans after Katrina.

$1,000 prize went to a student who "matzo-d" a magnificent Washington Square Arch!

So, this year, when you hide the afikomen ... attach with it, a bissel glue! Instead of a giving a few coins, you may be kicking off a whole new career for the kinder!

SHMEGGEGE SHORTS
The year? 1992. Actress Melanie Griffith, who was 34 (and we assume a high school graduate) at the time, told a reporter about her eye-opening experience in the film, Shining Through, where she played a Jewish secretary during WWII.

"I didn't know that 6 million Jews were killed. That's a lot of people."

Sounds like she's ready to replace mom, Tippi Hedren, in an update of the Hitchcock thriller: The Bird's-Brain.

OY, TALK ABOUT A HEADACHE!
On the 102nd Birthday of perhaps one of the 18 (why not?) wonders of humankind – aspirin-- is causing a major headache for historians. When you think aspirin, you think Bayer. (OK, not your first thought, maybe.) And the world has credited Bayer's 29-year-old German chemist, Felix Hoffmann, with synthesizing the miracle drug of the century. And it was Hoffman who was feted across Germany in celebration of one of its only global "brands." Ah, but new research has surfaced proving that not Hoffmann, but his supervisor, German Jew Arthur Eichengrun, was the true inventor. When the Nazis came to power, all references to Eichengrun "mysteriously" disappeared from – all references, even though the German-Jew, was wealthy, and could spit from his house to Hitler's. The story is the stuff of Spielberg. Hugely successful drug company ... high Nazi "Society" ... concentration camps (which Eichengrun survived) ... to the scientist's passionate attempt to get the recognition he deserved until his death in 1949. A real "Who dunnit?" Personally, I have to go with the Jew. Germany, 1890s? Who had the headache? Besides, look what we did with chicken soup!