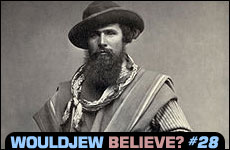 YIPPIE AI OY! ONE OF THE LAST JEWISH GAUCHOS

When we Jews think occupations, “cowboy” isn’t among our top ten. That is, unless you’re talking Argentina, circa 1890, where Jews roamed, roped, and steered on their cattle ranches. Now a footnote in the Diaspora, 50,000 Russian and Eastern European Jews, financed by eccentric German-Jewish millionaire Baron Maurice de Hirsch, got out of “Dodge” (The pogroms of Russia and Eastern Europe), and staked their claim of 123-acre plots. The move was encouraged by an 1881 Argentinean presidential decree, specifically to attract “Israelite” immigration, to populate the sparsely populated area.

Picture it. Thousands of bearded men in black hats, their frum wives shlepping their belongings, stepping off a boat in Entre Rios to each become a Yiddishe Roy Rogers and Dale Evans while keeping things strictly Kosher. "They were strict, I mean strict, about the Sabbath. We had to walk to the synagogue. You could not ride your horse," recalled Jose "Tito" Roimiser, 84, an ex-gaucho whose papa came to Argentina as an infant.

The last of the immigrants arrived to escape the Holocaust in 1936. Ultimately, these Yiddishe cowboy families spread over 16 colonies, consisting of agricultural cooperatives and shtetl-like hamlets. But, the times have been a-changing. The kinder have turned in their saddles for suits and headed to Buenos Aires. Today, most of the once lively shuls and Jewish schools sit almost empty and dilapidated.

Yet, there remain Jewish elders who staunchly hold fast to their Yiddishe roots on the Argentinean plains.

Jaime Jruz, 65, one of the few remaining gauchos, feels an obligation to his ancestors to keep the old traditions alive. He’s joined by a handful, now mostly in their 80s. "This is a story we have to treasure, that we have to keep alive for our grandchildren," says Jruz, from the same farm his grandfather settled. Villa Dominguez's Museum of the Jewish Colonies holds the region's artifacts, including century-old prayer shawls, books, and farm machinery, along with a photo of Jruz’s grandfather, Moises Koselevich, with a bushy beard and fedora.

These elders want to re-ignite the community with help from foreigners, but, with only 400 Jews remaining, revival isn’t promising. When Jruz looks at the photo of his zayde, he recalls the perilous hardships his forefathers endured. "Our ancestors came from Russia with nothing and they made it," he said. "You have to respect that."

This summer Israelis have been “curdling”over the high price of ...... cottage cheese! And more, have been making their feelings known via a fierce Facebook protest. It seems that the cost for this simple dairy product, an Israeli diet staple, has risen 39% in the region since 2008! So Israelis have been geshrei-ing their outrage, garnering over 1,000,000 FB supporters since the page was inaugurated in June. And it’s only the tip of the cheeseburg, as organizers are also enraged at the overall cost of dairy and other food products, which are significantly higher than prices in Europe or the U.S.

The FB campaign has been so successful that the Knesset held emergency meetings to investigate the problem. Finance Minister Yuval Steinitz called together food industry leaders, and David Gioil, to discuss the high cost of dairy products. David Gilo, chairman of the Antitrust Authority, suggested importing it, in order to lower prices (which, with the added tariffs, wouldn’t work, anyway). When he came up with the idea, however, Shraga Brosh, president of the Manufacturers Association suggested Israel import a new finance minister.

Lately, the lowly cheese, dubbed “white gold” by the press, has been referred to as such a “luxury item,” that an opposition lawmaker presented PM Benjamin Netanyahu with a container of the “good stuff.”

Some vendors are lowering prices, realizing the seriousness of the situation. Not only is the integrity of beloved blintzes and kugel in the Holy Land at risk (anyone into a chipotle blintz?), but badniks could, heaven forbid, (like US jeans in the USSR), start a black market by shlepping Breakstone’s in coolers, and maybe collapsing the entire Israeli currency system!

Then again, I’ve been known on a rare occasion to overreact.

Last Mother’s Day writer Deborah Kogan's son, Leo, awoke with a fever and rash. After visiting the doctor, mom posted photos of the four-year-old Jewish boy describing his symptoms. The next day she added new startling symptoms in updates. "Baby getting sicker. Eyes swollen shut. Fever rising. Penicillin not working. Might be scarlet fever. Or roseola. Or...????” The comments started from her fellow Facebookers, including a call from a friend, whose own child had similar symptoms and was diagnosed with Kawasaki disease, a rare and potentially fatal auto-immune disorder that attacks the heart. Deborah, not wanting to overreact, waited. When Leo’s strep test came back negative, she re-considered, especially when a pediatrician also posted about the possibility of Kawasaki. Mom took her son to the hospital and it was confirmed. The boy was suffering from an enlarged heart and liver disease, triggered by disease.

Thanks to Facebookers picking up on the serious symptoms the doctor’s office missed, young Leo is now on the mend. Should posters trump doctors? Of course not, but, despite criticisms of the new Social Media, it provided this family with many “second opinions,” that may well have saved a child’s life.

You’re an observant Jew. You’re khaloshing for a piece of toast. You grab for the Kosher bread, and who do you see smiling at you? The Pope. While he’s certainly a righteous person, deserving of respect (and he even speaks fluent Hebrew), for some, it might be a little like seeing an oyster on a package of “oyster” crackers. Now, how you may be wondering, would a perfectly delicious, kosher, so-good Israeli bread be named for Pope Benedict XVI?

Here’s the story. The bread, a hybrid of two Israeli wheat strains created by Uri Kushnir at the Volcani Center, was a rush job, to allow President Shimon Peres to present a little something when he met with the Pope in 2009. And so someone thought it was only natural to “christen” it “Benedict Wheat.” And therein started the problem.

Frum farmers, whose fields are located near Beit She'an, refused to plant the wheat strain with the “Catholic” name. To end the tsimmis, according to Ynet, the bread has recently been officially re-named Binyamin Wheat.

To these farmers, obviously, you are what you “wheat.” (I heard that!)

Not Your Typical Nice Jewish Boy
The Softball Player
How This 6 Generation Bread Baker Brought Back Israel’s Ancient Grains
Olivia Newton John’s Grandfather was a Nobel-Prize Winning Jewish Physicist
Comments
MOST POPULAR IN Jewlarious
Our privacy policy
Aish.com Is Looking for Great Writers