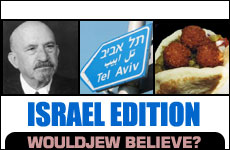 Remarkable facts about our beloved homeland.

The first modern Jewish city, founded 1909 on sand dunes north of Jaffa with the building of sixty homes was Tel Aviv. The following year it was named Tel Aviv which in translation means “Hill of Spring,” taken from a Babylonian city (Ezekiel 3:15) and used by Nahum Sokolow as the title for his translation of Herzl's book Altneuland.

Bush wondered how Peres stayed in such good shape. “I run the Israeli cabinet,” replied Peres.

Hebrew, the language of study, religion, formal and literary works, ceased to be a spoken language around 250 B.C.E. An early Zionist, Eliezer Ben-Yehuda (1858-1922), realized that a common language would be required for those returning to their homeland. Upon landing in Jaffa in 1881 (from Lithuania), he established the first only Hebrew-speaking household, worked tirelessly on modernizing Hebrew and on the first modern dictionary, completed by his wife and a son after his death. All 16 volumes were finally published in 1959.

Hundreds of people a year write prayers and difficulties and mail them to, you guessed it -- God. The address? "God, Jerusalem, Israel." So where does the mail go? Does God get them? Let us hope. First they go to the Israeli Post Office's Dead Letters Department, then each letter, collected in a velvet bag, is posted into a crack in the Western Wall. Perhaps more importantly, does God answer all the letters? Of course. (But a self-addressed stamped envelope wouldn’t hurt!)

According to author Tim Boxer, when Shimon Peres visited Vice President George Bush at the time, Bush inquired how the Prime Minister stayed so fit. It wasn’t a terrific secret. “I run the Israeli cabinet,” replied Peres.

If You Will It

“When I was 14 my father took us to meet Chaim Weizmann the day before he went to Washington to persuade President Truman to recognize the State of Israel. He asked me when I was going to Israel. ‘Next year if there's peace’ ... because that's what I'd been told to say. He chastised me: "There will be peace."

My father, a Zionist, sat at the kitchen table listening to the radio while the United Nations voted on partition. When [the vote] put it over the top, he just sat there and cried ...” Manny Azenberg, producer

We American Jews have been divided on many issues. But when it came to supporting the creation of the modern Jewish State, aid was there and wallets were open. The Haunted Smile reports a meeting with Golda Meyerson (Meir) at Eddie Cantor’s house in 1948 to raise funds for Israel. Jack Benny sent a signed blank check with instructions to “fill in whatever you need.” Cantor did, for $25, 000, the least he knew Benny would have contributed.

I have taught my sons to be good Jews. To battle for that which is right until the last breath, for man is duty-bound to fight for what he holds dear in life. – Rivka Gruber

When the Israel-Egypt peace treaty was signed, Rivka Gruber was among the dignitaries. A pioneer settler in the Land of Israel, Rivka joined a Jewish Battalion. Her son Ephraim joined the Haganah and was killed two months before the establishment of Israel. Her other son, 16-year-old Zvi, was killed in battle against the Egyptians three months later. Rivka went on to teach others in a remote region of Israel, helping to transform the area into a thriving sector.

Five years ago, I submitted my application for exit to Israel. Now I'm further than ever from my dream. It would seem to be cause for regret. But it is absolutely otherwise. I am happy. I am happy that I lived honestly, in peace with my conscience. I never compromised my soul, even under the threat of death.---- Natan (Anatol) Sharansky in Moscow court before 1978 sentencing.

On February 11, 1986, Sharansky was freed, greeted in Germany by Israeli officials and given an Israeli passport. In March 2001, he became Minister of Housing and Deputy Prime Minister.

“I was at the store when a woman started speaking to me in urgent, Hebrew, gesturing to my 14-month-old son who was happily sucking on his lollipop. Eventually I put it together .... her words, like sakana [danger] and lo tov [not good]. No good, she was saying, for such a young child to have a lollipop. Why did [she] have to get involved? Lollipops can pop right off the stick, God forbid, and get stuck in the child's throat. This is Israel, where one's child is not simply one's child [but] belongs to everyone.”– Excerpt from Aish.com, Devora Talia Gordon

Lincoln: Shortly after delivering the Emancipation Proclamation, President Abraham Lincoln met a Canadian Christian Zionist, Henry Wentworth Monk, who expressed hope that Jews who were being oppressed in Russia and Turkey be emancipated "by restoring them to their national home in Palestine." Lincoln replied this was "a noble dream and one shared by many Americans."

Truman: “I had faith in Israel before it was established, I have faith in it now.”

Eisenhower: “I believe [Israel] has a glorious future before it—not just another sovereign nation, but as an embodiment of the great ideals of our civilization.” -- Dwight D. Eisenhower with David Ben-Gurion, May 26, 1952

Lyndon Johnson: When Soviet Premier Aleksei Kosygin asked Lyndon Johnson why the United States supports Israel when there are 80 million Arabs and only three million Israelis, the President replied simply: "Because it is right."

Nixon: “I may not worry as much as Prime Minister Eshkol does about Israel, but I worry as deeply.” – President Richard M. Nixon in a Memorandum of Conversation with Israeli Ambassador Harman, February 7, 1968.

Clinton: “The United States admires Israel for all that it has overcome and for all that it has accomplished. We are proud of the strong bond we have forged with Israel, based on our shared values and ideals. That unique relationship will endure just as Israel has endured.”

Israel accounts for less than 1/1000th of the world's population, and is the 150th smallest country, yet is a world leader in many areas.

Humanism, Politics, and Culture. Israel is the only liberal democracy in the Middle East where Muslims, Christians, and Jews may vote in free and fair representative parliamentary elections. It also has the highest average living standards in the Middle East. Israel's $100 billion economy is larger than all of its immediate neighbors combined.

Innovation: Israel leads the world in the number of scientists and technicians in the workforce, with 145 per 10,000, as opposed to 85 per 10,000 in the U.S. More, it has the highest ratio of university degrees to its population, the highest per capita ratio of scientific publications and patents filed, and proportionally the largest number of startup companies in the world. Israelis among other things:

*designed the most impenetrable flight security, and advise the U.S. re: airborne security threats.