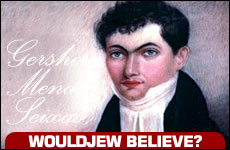 A JEW AT THE FIRST OFFICIAL THANKSGIVING!

Many Jews know that Thanksgiving is probably derived from Sukkot as both are autumn harvest festivals. While t>he pilgrims invited local Indians to the first Thanksgiving in 1621, most likely in early October, near Sukkot, the first >official> Thanksgiving Observance was held in 1789 by proclamation of George Washington. WouldJew Believe a leading Jew attended: Gershom Mendes Seixas, cantor and spiritual leader of New York City’s Congregation Shearith Israel. Seixas, a strong supporter of Washington, was one of the clergy when the President was inaugurated. More, at Shearith Israel, Seixas preached that Jews were “equal partakers of every benefit that results from this good government” and should try “to live as Jews ought to do in brotherhood and amity, to seek peace and pursue it.”

So, this Thanksgiving feel free to pass the Kosher turkey … and add a bissel tsimmis.

"Spiritual" estate planning, or passing down assets based on values has become a hot issue for Baby Boomers who want to keep their Yiddishkeit in the family. Aside from end-of-life health care and burial arrangements, some spiritual wills also leave heirs in or out by “affiliation,” for example they may disinherit children who marry outside the faith. In a 2009 case, the Illinois Supreme Court, overturning the decisions of lower courts, unanimously ruled that a Jewish man, Max Feinberg, and his wife could legally cut off their grandchildren who chose to marry outside of the Jewish religion. Personally, while I’m adamant about marrying “in,” I wonder if it isn’t far better to instill our values, rather than “bribing,” which, even for a noble cause is a pyrrhic “victory” at best. What do you think?

Despite German Chancellor Angela Merkel’s attempt to keep male circumcision legal warning they’ll look like dummkompfs to “touch” this sensitive area for Jews, the mishegoss in Germany continues! Now, they’ve added a new wrinkle. Over 50 MPs from three parties are proposing that parents must wait until their son is 14 so he can give his informed consent! These Uber Dummkompfs who have cited “trauma and harm to the child” (claiming this is not anti-Semitism), have now decided it’s OK to “traumatize and harm” a teenager. Someone please explain this to me. Angela?

In 1960, former President Harry Truman wagered a guess when at an Israel bond rally, predicting that "50 years after I'm dead," a Jew might be elected President of the United States. "I'd certainly like to see it," he said, "but the figures are against me. The next thing you know, we’ll elect a Jew, then maybe a colored man for Vice President." Truman died at age 88 in 1972. As of 2012, We Jews are still waiting for President Truman’s predictions to come true. 10 years to go before the annual Easter egg hunt gets replaced with an Afikomen hunt…

JEWS IN A HUFF OVER HUFF

Many Jews are in a huff when, in a recent article, the Huffington Post offered up a poll asking “What is Judaism’s most unusual ritual?” This was accompanied by an article declaring the Lulav and Etrog ritual to be “Judaism’s closest thing to a rain dance.” The poll, which offers no total vote tally, has thus far placed circumcision at top (23.32%). Is the smell of anti-Semitism wafting or is this just a Huff Puff piece? Would they ever ask, “What is Islam’s most unusual ritual?” Hmmm.

Would they ever ask, “What is Islam’s most unusual ritual?”

NO LONGER AT OPPOSITE POLES

For many Polish gentiles, Jewish culture is now being seen as part of their Polish heritage, and many are eagerly seeking to revive, remember, and respect the Polish Yiddishkeit. Marek Tuszewicki, a non-Jew doing doctoral work at the Institute of Jewish Studies at Jagiellonian University in Krakow, also teaches Yiddish at the Krakow JCC, and co-founded Cwiszn, a quarterly that publishes articles and poems in Yiddish. “Many Poles are interested in Yiddish because it is the heritage of Poland,” Tuszewicki said. “Yiddish developed here and great Yiddish literature has been written here. Forgetting Yiddish we would forget an important part of our culture.”

In Kielce (my late mother’s birthplace), Bogdan Bialek organized a ceremony commemorating the Jews murdered in a 1946 pogrom. The ceremony became annual memorial marches. Recently, he arranged for a sukkah in the town’s center, where locals heard stories and saw films about Kielce’s Jewish history.

In Grodzisk, 2009, locals wanted to commemorate their town’s local Jewish heritage. They started “Jewish Street,” by lighting up the walls of the old Jewish cemetery one night. In 2010, Robert Augustyniak, one of the project’s initiators, excavated Jewish gravestones used to build a sidewalk and return them to the cemetery. “It was raining that day,” he said. “From the mud began to appear some symbols: hands, candles, ornaments, plants and finally the Hebrew inscriptions.” His group then organized Grodzisk’s first Jewish cultural festival. In 2011, the Israeli Embassy in Warsaw gave Jewish Street an award.

“The memory of the Jews is now fashionable in the city,” Augustyniak said.

I SCREAM YOU SCREAM … WE’LL ALL SCREAM FOR ISRAEL’S GOURMET ICE CREAM?

Israel has joined the hip gourmet ice cream trade with new flavors that may well put a Jewish stamp (never mind taste) on the ooh soo good confection. But will Hummus Ice cream make you crave frozen chick peas? How about Eggplant Ice cream? Of course if you prefer these on pita, you can choose Halva ice cream. Another popular flavor is Mastik – chewing gum – sometimes also called Bazooka. Personally, given all the abuse our homeland receives, Rocky Road, should be the National Dish.