A Tale of Two Megilot 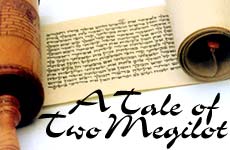 In an apartment in Jerusalem, there reside two Scrolls of Esther that tell a story of exile and escape, hope and failure.

For as long as I can remember my parents have had two Megilot Esther in their home. Neither was new, but one was far older than the other. Of course, the newer one was easier to use and read; it was beautiful with large clear letters. It was the one we used almost every year to follow the reading of the Megila in Shul. The other one was older with some letters a bit blurred. The old parchment didn't always obey the reader and tried to roll up of its own accord. But aside from the words written on it, this Megila had another fascinating story to tell: It was the Megila of my great grandfather - my father's father's father.

My grandfather left Europe during World War I. He spent some time in Germany and eventually made his way to the U.S. where he was married in 1923. He married the daughter of a great Rabbi, the former Rabbi of Riminov, who had emigrated to the lower Eastside of Manhattan. My grandparents had only one child, my father, whom they named after his paternal grandfather, Pinchas. My grandfather had two brothers and a sister living in the U.S. but of all the grandchildren my father was the only religious Jew.

After World War II, my grandfather traveled to Israel for the first time. There he was reunited with another sister; he had lost touch with her before the war and did not know that she had survived. Indeed, her route to Israel had been circuitous, taking her from Galicia through Siberia and eventually to the Holy Land.

When my father traveled to Israel for the first time in 1968, this aunt decided to give him the old Megila. Perhaps she entrusted it to him because he was named for her father, or perhaps because he was a Rabbi. Either way, this was the only thing in our possession that connected us with my father's grandfather, aside, of course, from our family name, and my father's given name.

The Megila had traveled from Galicia with my father's aunt through Siberia, before making its way to Israel. This Megila told the story of Jews traveling, keeping their identity, looking for a safe haven, and being drawn to holiness as if pulled by a magnet. This Megila is our link to the past and represents our commitment to the future.

But, as I mentioned, there is a second Megila, a newer Megila, one that most likely never saw Galicia or Siberia. It was owned by one of the elderly men who prayed in the synagogue in Brooklyn where my father served as Rabbi for nearly 40 years. The owner of this Megila grew old and decided to give his Megila to his Rabbi as a parting gift before he passed away. He realized that there was no one in his family who attended synagogue: His son was disinterested, his grandchildren disenfranchised. He was afraid that after his demise the Megilah would be discarded with other " worthless" artifacts. His gesture, while understandable, is remarkably sad. Will his grandchildren ever see their grandfather's Megila? Will they care?

I have a quandary regarding the Megila I will use this year: Shall I borrow the one belonging to my great grandfather, and show my children something which belonged to their Zayde's Zayde? Shall we perform the Mitzvah of reading the Megila with this family treasure? Perhaps I should use the other Megila; perhaps that is the story I should tell my children, about the man who could not interest his children in Purim nor the rest of the holidays?

Perhaps these are not two different stories, nor are they new stories. Jewish history is full of Jews who traveled from place to place, always with an eye toward Jerusalem, always mindful of their destiny. They communicated to their children with passion, and initiated them into the community of believers. On the other hand there have been Jews who chose to abdicate, and failed to instill in their children the feelings and beliefs which have permeated our collective existence. Perhaps these people felt uncomfortable being "different," and they tried to fit into the larger community. Their attempted acculturation had a price; their Jewish identity was sacrificed and lost in the process.

The beginning of the Megila speaks of Jews who participated in the King of Persia's party so many years ago. They desperately wished to fit in; they didn't want to be different from their neighbors. They were certainly frightened by the charge of " dual loyalty". Then, as now, there were Jews who failed to teach their children. There were Jews who chose to remain aloof from " that old time religion". By the end of the book, all the Jews come to realize that we are one people, sharing a common history and a common destiny. Tragedy was averted, the Jews were saved, and the return to the Land of Israel could commence. The Jews were reminded of their destiny. Today we stand so many years later, after so many detours on the road toward our destiny. When we see those among us who are unwilling or unable to communicate Judaism's eternal message to the next generation, we cannot help but wonder who will still be on board when we reach the destination?

After much thought I finally arrived at third option: I purchased my own new Megila. I realized that our family too should have a Megila in our house. I will sit with my children when it is read. I will remind them of the older scrolls they have seen in my parents' apartment, and of the stories they represent: stories of continuity, faith and destiny, stories of exile and despair. Exile is the essence of the Purim story, but I pray that our family has returned to Israel permanently, finally ending the exile and wandering, the estrangement and despair begun in Persia and recorded in the Megila. I hope that my children will cherish our new Megilah, and that they will learn her story, internalize the messages of Purim story and of our family's various Megilot, and identify with the values they contain.

Stalin and the Purim Present
How Did I Miss It?: Rosh Hashana
Where's Waldo and the Design Argument
Bagels, The Ghetto, and Yom Kippur: A Journey into the Bagel’s History
Comments