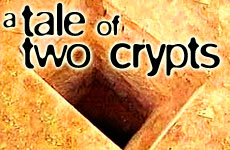 The discovery of Saddam Hussein in a crypt-like hole, hidden by bricks and dirt, in a farmhouse in a small town near Tikrit brings to mind the story of another Iraqi who also hid from the authorities by literally going underground.

That Iraqi is Jawad Amir Sayyid, 45, of Karada, a town southeast of Baghdad. He dwelt for an astonishing 21 years in a cell below his family's kitchen, entering it on December 2, 1981, and not once emerging from it until April 10, 2003, a day after the toppling of Saddam Hussein's regime.

Sayyid disappeared from the world because he had deserted from Saddam's army and supported dissident views. Fearing execution, he built a concrete one by one-and-a-half meter subterranean room.

The walls of his self-imposed prison cell were organized with a series of hooks holding such implements as a scythe, a bamboo fan, a mirror, a kettle, a stove, a toothbrush and a clock. A small hole at the top of the cell provided some sunlight. He drew water from a tiny well and had a miniature toilet.

His mother tended to him during all those years through a trap-door entrance; he kept up with world events by listening closely through headphones to the BBC's Arabic Service. His first hope of release came right after 9/11, when US President George W. Bush gave a speech declaring that terrorists of the world would be hunted down. "The next time my mother brought me food I told her of my conviction that [Saddam Hussein] would not last." Sayyid waited only one day after Saddam's fall to abandon his hiding place.

Sayyid's story makes a powerful symbolic counterpoint to Saddam Hussein's capture on Saturday night. A young man hides in a crypt for over two decades as Saddam Hussein rules the land as a brutal and absolute dictator. The American-led coalition liberates the country. The no-longer-young man comes out of his stifling cell and staggers into the sunlight just as the monstrous ruler abandons his gleaming palaces and himself begins haunting crypts to escape the authorities.

Since April 2003, innocent Iraqis move about freely above ground while Saddam and his henchmen slip from one rat hole to another.

The contrast in their spirits on leaving the crypts bears notice: Saddam was described by the US military as "a tired man, a man resigned to his fate." Sayyid said of himself to London's Daily Telegraph, which described his bent and birdlike frame as quivering with excitement, "I was a fit young man when I first took refuge. Now I am withered and old. But I feel I have the energy of a young boy once again and there is not a second of the day when I do not taste the fruits of freedom."

In miniature, this tale points to the profound morality of the American-led invasion, symbolized by the fact that, since April 2003, innocent Iraqis move about freely above ground while Saddam and his henchmen slip from one rat hole to another.

In the broader sweep of history, the Iraqi vignette serves as a reminder of the role Americans have for 60 years played around the world -- defeating totalitarian regimes and bringing a modicum of decency and freedom to desperate lands.

The list is a long one and would include virtually every country of Western Europe, saved once from the Nazis and a second time from the communists. It includes all the states and satellites of the former Soviet Union, which collapsed on failing to sustain a rivalry with the United States. The list also includes many East Asian countries saved from Japanese imperialism. And it includes Kuwait, saved from Iraqi aggression.

Conversely, the one place where the United States lost a war -- Vietnam -- totalitarian rule continues.

In short, however flawed the US government is -- and it certainly is flawed -- in the course of pursuing an enlightened self-interest since the 1940s, it has liberated peoples worldwide. Or, to quote Jawad Amir Sayyid back in the spring, soon after he left the crypt: "I believe that Allah worked through Mr. Bush to make this happen. If I met Mr. Bush, I would say 'thank you, thank you, you are a good human, you returned me from the dead.'"

The words may be hyperbolic, but this sentiment of gratitude toward America is one that hundreds of millions of people have at one time shared.

Watching Maradona Play Made Me a Believer

When Bob Saget Wrote Me a Letter and Rocked My World
Blessing on Chewing Gum
Was Rahab a Prostitute?
Extras In Our Own Epic
Comments
MOST POPULAR IN Current Issues
Our privacy policy