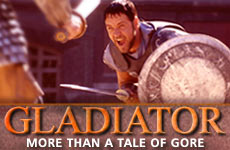 Might there actually be a message in this Academy Award-winning movie that I could agree with?

As the big winner in this year's Academy Awards, Ridley Scott's movie "Gladiator" is understandably receiving lots of attention. It has all the ingredients an audience loves: blood, gore, passion, and revenge -- all set to the magnificently reconstructed settings of the greatest empire in the history of Western civilization: Rome.

As a committed Jew, when I thought about the movie, I couldn't help but feel unease: a celebration of the decadent, barbaric, pagan values of bloodshed, violence and death. A Jew is supposed to give up his life rather than be forced to commit murder!

Then I decided to take a closer look at "Gladiator." Might there actually be a message in this movie that I could agree with?

"Gladiator" tells the story of a Roman General, Maximus Decimus Meridius, or Maximus for short. (I suppose if he were Jewish we would just call him "Max.") Maximus has close ties with the Roman Emperor, Marcus Aurelius. When the emperor's son Commodus strangles his aging father and names himself the new emperor, he figures that one of his main opponents will be Maximus, his father's favorite. So he tries to have Maximus executed, but the plan goes sour when Maximus escapes from his executioners, is sold into slavery and made into a gladiator. (You know, one of those Roman arena warriors who fights other gladiators and beasts to the death.)

He is sent into the arena to kill or be killed in front of thousands of spectators.

Maximus loses everything -- his titles, his army, his estate and his family. He is made into a slave, the lowest member of the Roman Empire. He loses his independence and his life, becoming the property of his master who sends him daily into the arena to kill or be killed in front of thousands of spectators. Death can come in an instant. What is the point of being alive after everything that gave meaning to your life is taken away from you, and the evil man that did this to you is now the most powerful man in the world?

Defeated, powerless and overwhelmed at the hands of a terribly powerful foe, what hope is left for Maximus?

His only hope is hope itself. "Gladiator" is in fact the story of one person who manages, despite his lowly position and numerical disadvantage, to overcome the most powerful individual in the world. Through the force of his will, through his desire for a just revenge for the murder of his wife and child, and most importantly, through the righteousness of his path, Maximus succeeds in winning the hearts of the Roman mob, and in defeating Commodus, the evil emperor.

In doing so, Maximus teaches us a lesson: that good and righteousness cannot be beaten, no matter how powerful and menacing, heartless and immoral the evil that stands against it.

In this sense, "Gladiator" teaches us a crucial lesson about power. Power is one of those elusive qualities that we all aspire to have. We seek it through money, through education, through politics, and through our social ties. When we think of the Roman Empire, we think of "power." The Roman Empire ruled over the Old World for hundreds of years. There were other individuals and nations that managed to conquer much of the world: Alexander the Great is the most famous, and Napoleon wreaked some havoc in his time. But since the fall of the Roman Empire, that level of sheer power has not been matched.

Maximus defeats with his mind and his heart.

Though his skill as a gladiator and as a warrior are important, it is not with his sword that Maximus defeats evil, but with his mind and his heart. He has courage, resilience, and a singular belief in the power of good to triumph over evil.

Though the movie's final, climactic scene depicts Maximus killing the Emperor Commodus, Maximus in fact had won the war with Commodus much earlier, by virtue of his survival and his refusal to be broken.

If this idea rings true in your ears, it is no coincidence. This theme has been repeated in Jewish teachings for millennia. Throughout the Bible, one is confronted time and again with the idea that despite the size of an army or how advanced their weapons, the biggest factor in battle is how large your heart and whether or not it is in the right place.

Moses teaches the nation of Israel time and again not to rely merely on the strength of their army, but to know that real power comes from following the path of truth, justice, and commitment to God. The prophet Zechariah exhorts: "Not with might and not with strength but with my spirit said God the Almighty" (Zechariah 4:6).

It is no coincidence that the Jewish nation came into direct conflict with every great empire of the classic world (including the Romans) over precisely this matter. Not unlike the fictitious character of Maximus, our nation suffered terribly for our beliefs and for our insistence on following the path of truth and justice.

The Romans destroyed our Temple in 70 CE, slaughtering millions of Jews in the process. If you go to Rome today you can visit Titus' Triumphal Arch which bears the engraved image of the Menorah from the destroyed Temple in Jerusalem being carried victoriously into Rome.

Yet the Jews have survived, drawing resilience from our firm faith in the Torah. Amazingly, against all odds, we have prevailed.

How is it that we "prevailed?" No, we never beat mighty armies Roman or captured their kings. But just go out into the street wherever you live, and try to find a member of the Roman Empire. Or if there aren't any Roman centurions around your neighborhood, perhaps you could find a Greek, a Babylonian, or a Persian?

Go out into the street wherever you live, and try to find a member of the Roman Empire.

You won't find any, of course, because they have vanished from the face of the earth long ago. They remain only as memories in the pages history books, and in movies such as "Gladiator."

And yet if you go into any city in the Western world, chances are pretty good you can find a thriving community of Jews: living, loving, and continuing their commitment to the eternal Torah through its study and practice of its teachings.

"Gladiator" illustrates somewhat allegorically what we as Jews have learned through our history: that no matter how powerful or evil our foes, by following the path of truth and justice as taught in the Torah, we can forever overcome.

Yoni Stanleigh is a student of Torah and Jewish philosophy at Beit-Morasha Institute of Jewish Studies in Jerusalem.