A Tale of Two Circuses 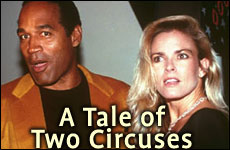 One circus warmed our imaginations, the other left us cold with disgust.

This essay appears in memory of Nicole Brown Simpson and Ronald Goldman, as O.J. Simpson, on November 15, 2006, announces his forthcoming book: "O.J. Simpson: If I Did It, Here's How It Happened."

December 16, 1993. "Ladies and gentlemen," a mellow voice announced over the public address system, "may we remind you that the use of any photographic or audio equipment is strictly prohibited. Please find your seats; the Big Apple Circus is about to begin." Colored lights had begun to sweep across the circular stage. My two kids, staring straight ahead, were already mesmerized. Why, I wondered, were the spectators in front of us craning their necks, looking in the wrong direction, our direction?

"Daddy," I heard one boy whisper, "do you think I could get his autograph?"

I looked to my immediate right and there, as big as life, was an exceedingly handsome celebrity, O.J. Simpson. But what really took my breath away was the woman accompanying him, his wife, I presumed (after all, the two children sitting between them looked remarkably like each of their two chaperones). She was golden, radiant, dazzling and yet sedate.

As the circus got under way, my eyes occasionally flitted to the foursome on my right. So did my thoughts: Flawless beauty, untold wealth, multi-faceted talent, health, physical fitness, fame, family! Some people have all the luck.

Almost precisely six months later, she was found dead in what her neighbors described as a river of her own blood. And a circus began in Los Angeles that immediately eclipsed the one each of us had seen with our youngsters in New York.

Charged with -- and eventually cleared of -- her murder, he gained more fame than he had ever bargained for. She too became a household name. I learned that this presumably happily married couple at the circus had actually divorced in 1992. I learned that this woman on my right, who appeared the image of tranquility, had placed a frantic 911 call -- exclaiming that her ex-husband was going to attack her -- just seven weeks before the day we shared at the circus. I learned that her face which, having seen it up close, I could only describe as luminescent (none of those photographs did her justice), had been repeatedly pummeled over the years by this wealthy, handsome, talented celebrity.

As I tried to come to terms with her double life, two remnants of my high school education frequently invaded my mind. The first was a maxim attributed in The Ethics of the Fathers: "Rabbi Meir says, Don't look at the vessel, but rather at what it holds inside" (Avot, 4:27).

The second was a poem penned by E. A. Robinson (and popularized for millions of us baby boomers by Simon and Garfunkel). Entitled Richard Cory, its last two stanzas read:

And he was rich -- yes, richer than a king --
And admirably schooled in every grace:
In fine, we thought that he was everything
To make us wish that we were in his place.

So on we worked, and waited for the light,
And went without the meat, and cursed the bread;
And Richard Cory, one calm summer night,
Went home and put a bullet through his head.

Certainly, my jealousy has been resolved. I even find myself wondering: Could it be that Nicole glanced to her left as often as I did to my right? Did my family's obviously non-privileged status, our equally obvious love for one another, and even our uproarious laughter evoke in her a twinge of envy?

Probably not, and that's okay. Circuses elicit illusion. But now that the circus we attended together -- and the courtroom circus all of us attended without her -- is long over, I am left with few illusions about the myth that the grass is always greener on the other side of the fence. Every December for years thereafter, when the Big Apple Circus came to town, I'd do whatever it took to bring my kids to this joyful, magical place. And every December, as we took our seats, I'd look to my right and remember that golden woman, her shimmering beauty and her sweet-faced children. Then, the show would begin. My kids could not take their eyes off the stage. And I could barely take my eyes off them.

Anti-Semitism Is Deeply Woven into the European Fabric

Military Vets Find Solace and Faith in Israel
Lessons from the Book of Jonah
Where Are We? The Body, Brain, Soul Problem
Dr. Sheila Nazarian’s Escape from Iran
Comments
MOST POPULAR IN Current Issues
Our privacy policy
Aish.com Is Looking for Great Writers