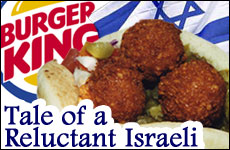 Two years in the Holy Land changed my life.

I am not a Zionist. I didn't come here for the land, its people or even my God. I didn't even come for the shwarma. I came because my husband, Amos had a Fellowship opportunity which would allow him to make a mid-life career switch to something which he was passionate about -- Israel and the Jewish people.

Honestly, I could care less about either. Well, that's not exactly true -- I was proud that my children went to a day school which helped to instill "real Jewish values." As a family we celebrated most of the Jewish holidays; we lit candles on Shabbat...

At that time Amos was working as a branding/marketing executive inventing clever names for companies like Burger King and American Express. One look in his eyes at the end of a week of commuting to and from New York City, with the end result being supposed pride in a new name for 'The Whopper,' and I knew when he got the chance to come to Israel we would have to go.

This two-year journey would mean I would have to set aside my desires -- for in this foreign land of war, there was no safety, no possibility of career advancement, and basically, as far as I was concerned, not much chance for happiness. But we would somehow manage, the two years would pass and we would return home.

When we first arrived in Jerusalem I felt like I had dropped off the face of the Earth. There was nothing familiar to hold on to. While Amos walked around breathing in the fresh scent of figs and dates, all I could smell was cat excretion.

It was hot, the people were cranky, the macaroni and cheese tasted funny. There was no "look" to the people here. They were of all colors, and ethnicities -- I couldn't find anyone who resembled us. I wasn't sure how to dress. I was excited when I heard other Americans speaking in the familiar nasal Midwestern accent in Hebrew: "Beseder," "Boker Tov." Obviously annoying to the natives, to me it provided a certain degree of comfort.

As the days turned to months, I began to notice different things. I noticed how our local makolet (grocery store) man deeply cared, in fact insisted, that we took two bottles of milk rather than one. One wouldn't be enough for our family. And he was right.

I was struck that the garbage men wore kippot, that the strong and brave soldiers knew when the spring anemones were in bloom. How up close these Golani fighters were actually only boys, about the age of my baby-faced nephews.

Women were fighting over the best recipe for chollent.

I began to welcome the familiar weekly dispute at the butcher as ladies disagreed over the best recipe for chollent, willing to go to the mat for their belief that adding an egg was a huge mistake. I began to notice how the summer light turned the stones on the buildings shades of pink, red and orange. I saw the trees, a strange mixture of palms with pines in between stone house terraced with vibrant multicolored flowers. I welcomed the early morning sounds of Hebrew and Arabic prayer, the melding together in the distance.

I looked forward to the frenetic pre-Shabbat scramble for challah, wine and flowers, followed by the intense stillness that fell across Jerusalem when the sun set and the Shabbat siren blew.

We began taking trips around the country. My shock and sadness of all we had left behind slowly began to lift as we saw sites we could never have imagined: the south with its magnificent desert hills, Bedouin tents where families lived their lives as wanderers. Our car was forced to stop as a boy, no more than our younger daughter's age, crossed the road with his herd of goats. We passed rows and rows of date trees perfectly aligned, tiny kibbutzim nestled in between the sand -- rich and green with the miracles of irrigation.

Up north, in contrast, water was everywhere. The fertile land was a quilt of orange groves and vineyards, the valleys and slopes became an ocean of wildflowers and blossoming trees. I wondered: Has anyone ever made aliyah for the sweetness of the tomatoes or the creaminess of the dairy products?

Our family and friends confessed they wouldn't visit us out of fear.

The more we saw of the country, the more I became amazed by our own family and friends who meekly confessed they wouldn't visit us out of fear, and a general feeling that this was not a place they chose to spend their only vacation. Yet if we were in Spain, or even France, they would have come by the dozens. How could this be?!

As the school year progressed, the girls began to speak Hebrew and make friends. I became accustomed to shopping in the shuk (market), knowing which fruit were ripe, how much a kilo of tomatoes should cost, what a half-shekel coin looked like. The language began to sound less harsh to me. I became annoyed by the demanding American tourists who assumed everyone spoke English. I didn't jump when the driver behind me honked even before the light had turned green.

My kids were free to travel the streets alone, not like at home where it is against the law to leave a child unattended until the age of 12. Here, children could go to the park, walk home from school by themselves. I could leave them alone if I had to do an errand. Despite the image of this place as war-torn and dangerous, it felt like a small village where everyone looks out for one another.

As the two years passed, the world of bright and orderly supermarkets, mini-vans with car-seats, Starbucks and Borders began to fade. My younger daughter forgot how to say simple words in English, like butterfly, mop, eraser. I developed my own style of dress that was much more flowing and began to develop a selective palette for falafel and yes, shwarma.

It was around this time that we began to think about having to move back. As I filled out applications for my girls' day school, my mind wandered to what our lives would be like one year from now. I knew we would go back but none of us in the same way. Life had inalterably changed for us. Providing for our children no longer meant keeping them wrapped up tight, warding them from the harsh realities of the world. They had tasted adventure and they knew what it was like. A better life for our children meant one that was filled with challenges and, at times, discomfort. It meant not always fitting in. It meant living in places where the teenagers sometimes even died defending a way of life.

I could now see my children as Israelis -- their language, their school year run according to Jewish time, the confident look on their faces as they ran off without their parents tagging behind. Yet we would be pulling them away from all of this. They would be returning to a place where most of the Jews would be friends from day school -- mainly from affluent suburban families rather than the kaleidoscope of people they had encountered everyday in Jerusalem.

As a family we would go back to the struggle for Jewish time -- confronted with the reality that soccer practice was on Saturdays and that most people, including our families, didn't think twice before calling us on Friday night. Once again they wouldn't be allowed to ride bikes to a friend's house or walk the few blocks to the library, We would speak English and slowly, inevitably, the children would forget their Hebrew; simple words; butterfly, mop, eraser.

Amos would return to the commuter train and I would once more be searching for a meaningful professional career. While waiting on the carpool line I would remember our two years in Israel once again taking solace in the fact that our children knew all the words to 'Hatikvah', and that we lit candles on Shabbat, though I would know it wouldn't be enough.

The other day my younger daughter Lea and I, strolling along the cobble-stoned paths of Yemin Moshe, met a woman who fell in love with Lea's charm and impressive command of Hebrew. The woman asked my daughter where she would be going to school the following year. Lea eagerly responded: "I'm going to Kitah Aleph (first grade) in America, but I'm really Israeli."

Found in Translation
It Takes A Lot Of Faith To Be An Atheist
How Instagram Brought Back This Nostalgic Soup
What Makes Eli Run?
Comments
MOST POPULAR IN Israel
Our privacy policy