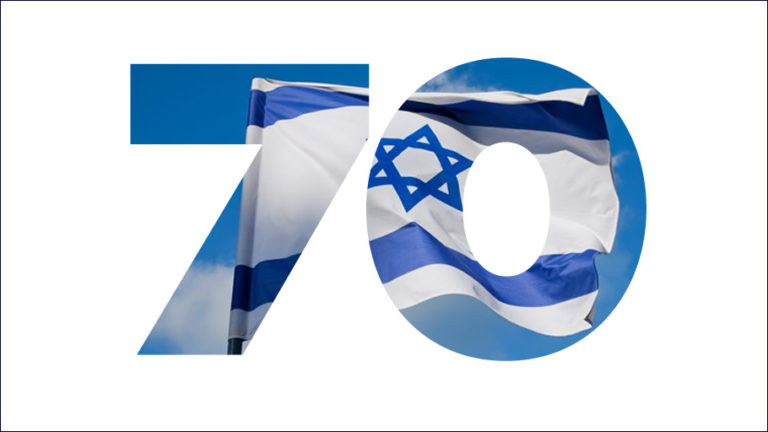 The number 70 was singled out for special attention in ways that make this Yom HaAtzmaut particularly meaningful.

In Jewish tradition numbers have special meaning and can convey crucial insights for our understanding of Jewish history.

On the eve of celebrating the 70th anniversary of the birth of the state of Israel and the miraculous return of our people to our national homeland after almost 2000 years of exile, let us ask: “Who knows seventy?” Who knows its secret and deeper meaning?

Seventy isn’t merely a nice round number. Long ago the number was singled out for special attention in ways that make this Yom HaAtzmaut particularly meaningful.

At the Passover Seder we almost tangentially met the number 70. Rabbi Eliezer ben Azarya admitted that he never knew the biblical source for the commandment to remember the Exodus from Egypt every night as well as day until he merited learning the source from another sage. Strangely, he introduces his joy in his newfound wisdom with the words “Behold I am like someone 70 years of age.” Commentators are all perplexed. We know that Rabbi Eliezer was in fact only 18 years old at the time. Many fanciful explanations are given to resolve the question. But the fact remains that in order to express the idea of old age he used the number seventy.

And why was that? Surely it was a reference to the verse in the book of Psalms: “The days of our lives are threescore and ten” (Psalms, 90:10).

Seventy is the proverbial biblical lifespan. Those are the number of years we are normally granted to achieve our mission on earth. Rabbi Eliezer, although he was only 18, feared he would live out his days without knowing a fundamental truth of Torah. His great happiness was the feeling that he was now “like someone seventy years of age”, the age at which we are to measure our achievements, reflect on our accomplishments, and take stock of our life’s journey and purpose.

More, 70 was the key to the creation of the Jewish people. The book of Exodus, moving the story of our ancestors from family to nation, tells us “And it was that all those who were direct descendants of Jacob were seventy souls” (1:5). The entire Passover story, the slavery as well as the Exodus, had its beginning with the very same number identified with biblical lifespan. Seventy is opportunity. Seventy is potential. And 70 is the number which reminds us that we are judged by the same divine standards that governed the rulings of the Sanhedrin.

In a remarkable commentary of the midrash on the verse in the Torah which tells us that there were 70 who originally descended to Egypt, the problem was raised that a count of Jacob’s family members gives us only 69. Why does the Torah tell us 70? Of the various answers given, the one which perhaps has the most relevance to this year’s 70th anniversary celebration of Yom HaAtzmaut is that God included himself in the number! God could not exclude himself from his people.

That is why those who went into the first exile were able to survive. And that is why, too, the state of Israel, surrounded by enemies who from its inception threatened its destruction and attacked it numerous times, nonetheless survived; more than survived, Israel prospered. It was God who was part of the original 70. It is God who remains the only rational explanation for the 70-year miracle of modern-day Israel.

To speak of Israel today after its first 70 years from birth is to acknowledge a dual reality. On the one hand, it would be foolish to maintain that Israel has achieved the vision of the prophets, that it has realized the perfection of its messianic destiny. There is much that remains to be done.

Seventy years witnessed the accomplishments of one generation. History requires additional 70-year periods, future generations to each one of whom is given the task of bringing us closer to the final goal. But we should not minimize what we have lived to see, what has already been accomplished.

We do not know when Messiah will come. But the rabbis have left us one clue to alert us to his imminent arrival. It is recorded in the Midrash by way of a fascinating parable.

A student once asked his rabbi: “We have been waiting so long for the Messiah to come, yet he still has not made his appearance. How will we, the Jewish people, know when he will at last reveal himself? What is the sign we can look for that will announce his imminent arrival?”

The rabbi responded, “I will answer you by way of a story. A father and son journeyed together on a long trek through a desert. Their destination was a faraway city. Weary from the trip, the young boy pleaded with his father to give him some kind of sign so that he might know when they were close to the final destination. In response, the father told the boy, ‘This will be a sure indication before you. Remember this sign. When you will see a cemetery, you will know that the city is near.’ This parable,” the rabbi continued to his student, “is the answer to your question. When you will see a cemetery, you will know that redemption is near. So, too, did God reveal to his children that in the aftermath of being beset by horrible tragedy, death and destruction, the Almighty will have mercy and answer the prayers of the Jews, as it is written (Psalms 20:4) ‘And the Almighty will respond to you in the day of great hardship.’”

The parable is perhaps a key to the proximity of the Holocaust to the creation of the state of Israel, to the link between Yom HaShoah and Yom HaAtzmaut.

The Holocaust came to an end in 1945. Just three short years later, when many thought that the genocide of 6 million meant the end of the Jewish story, we began anew fulfilling the first stage of the prophetic promise of redemption.

Seventy years, a biblical lifespan, brought us a major step forward to complete fulfillment. That is why we need to celebrate. And that is also why we pray that the next generation will be granted the opportunity to speedily complete the task – and the dream.

In Search of Aaron Sofer

The Einsatzgruppen and the Beginning of the Systematic Murder
Don’t Believe in Other Gods Versus God is One
Seeing Without Eyes
Why Shouldn’t We Eat Whatever We Want?
Comments
MOST POPULAR IN Israel
Our privacy policy
Aish.com Is Looking for Great Writers