The Villainy of Vashti 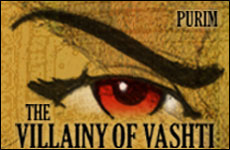 The character of Queen Vashti in the Purim story helps us define what it means to be a hero or a villain.

As the story of Purim in the Book of Esther begins, King Achashverosh of Persia is holding a banquet.

On the seventh day of the festivities, the king summons Queen Vashti so that the ministers and guests can admire her beauty. He commands that she come wearing only the royal crown. Queen Vashti refuses and is executed.

The job vacancy brings Esther to the palace where she is in position to save the Jewish people when chief minister Haman hatches his plot for their total annihilation.

Vashti, whose refusal to obey the king sets the action in motion, is an interesting character in this drama. In fact, in the first analysis she seems like a heroine -- a woman who had too much dignity to be paraded naked before a drunken horde. There is only one problem. Heroism is not determined from the outside in, but rather from the inside out. From that perspective, Vashti, as we shall see, was a villain.

Judaism defines heroism as an act of overcoming an obstacle that stands in the way of a spiritual objective. Such obstacles are placed before all of us by God, but the level of sacrifice demanded to overcome each such obstacle can vary widely. In the case of one person, genuine heroism may go as far as sacrificing one's life for the sake of another. For another person, genuine heroism may mean sacrificing ego or pride.

Therefore, our question when assessing Vashti's heroism or villainy is: what was she reaching towards and what stood in the way of her achieving that goal?

In order for us to draw conclusions, let us expand our picture of her.

Vashti was born to Babylonian royalty. Her grandfather was Nebuchadnezzar, who had destroyed Solomon's Temple in Jerusalem and driven the Jews into exile. Her father was Belshazzar, the last in a line of great Babylonian kings whose dramatic death is described in the Book of Daniel.

Belshazzar threw a party and commanded that revelers drink from the holy vessels of the Temple and then praise "the gods of gold and silver..."

At that moment, a large unattached finger appeared and started to write on the wall: "God has numbered the days of your kingdom and brought it to an end ... your kingdom has been divided and given to the Medes and Persians."That very night invading hoards of Persians and Medes attacked; Vashti was the only survivor. But the spirit of conquest that had doomed her father lived on intact within her.

We learn more about her from the Talmud (in Megillah 12). It tells us Vashti would have Jewish women brought before her, force them to undress and coerce them into working for her on Shabbat. The Talmud then asks why did she refuse to come before Achashverosh (not being known as a modest woman)? The Talmud gives two answers: 1) because tzaraat (a skin ailment resembling leprosy) erupted on her body; or 2) because she had grown a tail.

If an aggadic statement in the Talmud doesn't make sense literally, the approach that we are meant to take, according to the Maharal, is to try to grasp the underlying meaning of the allegory. With this in mind we shall proceed, separating the literal from the allegorical and analyzing the latter further.

It is almost certain given the social environment of ancient Persia, and the underlying hatred of Jews that came to the surface soon after this episode, that the first part of the statement is literal. Yes, she did have Jewish women abducted. Yes, she did want to humiliate them. Yes, she was clever enough to figure out the most efficient way to bring this about.

The second segment is not literal. No, she did not sacrifice her life by disobeying a despot because of bad skin. She did not have a terrible case of acne or anything resembling a simple skin disease. No, she did not reverse evolution and grow a tail. The second part is an allegory that demands interpretation.

A THREAT TO VASHTI

Jewish women represented a threat to Vashti because they were, in the most profound sense of the word, unconquerable. By observing Shabbat, they demonstrated that there is a ruler who is beyond the reach of any monarch. By maintaining their basic modesty they proved that they define themselves internally rather than superficially. They were untouchable.

It was for that reason that Vashti felt an almost compulsive desire to break them. By doing so she sealed her own fate. In order to understand how, we can follow the allegory that the Talmud presents.

The body-soul link is stronger than many of us realize. While we all know that excitement can raise blood pressure, and some of us can describe the process with great precision, there is far more involved that we have as yet to explore. In earlier times, God Himself would allow physical manifestations of an individual's spiritual state to show. The best known of this phenomenon is tzaraat. It affected the skin, the most external part of the body.

(The skin hides and protects the inner organs. The word for skin in Hebrew is or. It is written identically to the word iver, which means blind. The common denominator of the two words is that they both convey the concept of not being able to see things as they really are.)

Tzaraat was an eruption similar to leprosy in that the skin became tough and insensitive. The difference is that while in leprosy the entire effected area is insensate; in the case of tzaraat there always remained at least a patch of living skin in the midst of the dead skin. What this symbolized was that there was always a possibility of redefining oneself.

The Talmud tells that tzaraat came about because of sins involving slander. Slander always has one motivation -- arrogance.

There is no cheaper high for self-importance addicts (like Vashti) than trivializing and belittling others. It gives such people the feeling of superiority without any need to actually be superior. Blindness helps to silence the conscience, because then the victim can't be seen as a fellow human. Therefore, to slander freely without guilt, it helps to have thick skin and to be spiritually blind.

Vashti had long ago stopped seeing beyond the surface. Her punishment was that she had to face the fact that she too was not flawless.

In the process of disparaging others, she lost something very precious -- her own humanity. What she saw when she looked in the mirror was a parody of a human being -- the tail. She saw a heartless egomaniac.

WHY VASHTI REFUSED THE KING

We can now return to our original question. Why didn't she come when Achashverosh called?

The Talmud (in Midrash Rabba) provides us with the final piece of information that lets us put the puzzle pieces together. It reveals to us the words that she used when she refused him. "You were my father's stable boy. You had harlots parade in front of you. Are you going back to where you came from?"

Her intent was not to build herself up or to preserve her integrity. She was aware of what she had become, but had neither the will nor the courage to change. She had followed a pattern that had typified her life from the beginning. Her intent was to cut him down. There was no heroism here. There was only arrogance.

It is easy for us to fool ourselves. Heroism and egotism come unlabeled. The only key that we have is truth. Purim is the holiday in which every thing was turned about. The inside, the core of truth was revealed. Falsehood was shaken off. May we be worthy of using this day to discover the part of ourselves that is genuinely heroic.

Purim and Winning the Lottery
Faith: the Axis Upon Which the Wheel of Science Turns
Love - Not Just About Chemicals Anymore!
Is There a Moral Code in a Virtual World?
Comments
MOST POPULAR IN Purim
Our privacy policy