Eye of the Universe 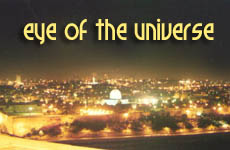 The world is like a human eyeball
The white of the eye is the ocean surrounding the world
The iris is this continent
The pupil is Jerusalem
And the image in the pupil is the Holy Temple.
(Talmud - Derech Eretz Zuta 9)


The holy city of Jerusalem has been the capital of the Jewish people for 3,000 years -- when King David bought a plot of land and designated it as the site of the Holy Temple.

What is it about this place? Why do Jews all around the world at the conclusion of the Passover Seder and at the end of Yom Kippur proclaim, "Next year in Jerusalem!" Why are synagogues around the world built so that people pray facing Jerusalem? Why do we request three times daily in the Amidah that Jerusalem be rebuilt? Why at every Jewish wedding -- at the height of our joy -- do we break a glass under the canopy in order to recall the destruction of Jerusalem? Why have the Jews never been able to forget about Jerusalem?

The holiness of Jerusalem preceded even King David. According to Jewish tradition, Jerusalem is the site of the "foundation stone" with which God initiated the creation of the universe. It is also the place where Adam was created, where Kain and Abel lived and built an altar to God, and where Abraham bound Isaac on the altar.

With Jacob, Jerusalem took on permanent and lasting value. In Genesis 28:17, upon awakening from his vision with the ladder, Jacob proclaimed: "This is none other than the House of God, and this is the gate to heaven."

Through the metaphor of the ladder, Jacob understood that the more we strive to grow and climb, the more God comes down to live among us.

The Torah refers to Jerusalem as "the place where God your Lord shall choose to rest His name" (Deut. 12:11). God's purpose in creation was for human beings to build for Him a place to dwell, so to speak, down below. Nachmanides (Exodus 25:1) explains that God desired a place where the revelation of Mount Sinai would be an ongoing, daily experience.

The place that God chose was the Temple in Jerusalem. For anyone who entered the Temple, it was experientially obvious that God exists, that He sustains and supervises all creatures, and that He gives meaning to the entire world. During the First Temple period, the Almighty was constantly apparent, and the reality of His existence was never in question. Imagine a situation where the entire nation believed in God with no doubts at all!

This is indeed the greatest form of human pleasure. As the Ramchal writes in Mesilat Yesharim ("Path of the Just"):

Man was created for the sole purpose of rejoicing in God and deriving pleasure from the splendor of His Presence; for this is true joy and the greatest pleasure that can be found.

The specialness of Jerusalem lies in its status as God's home. This is where His Presence is most tangible. In Jerusalem, being in touch with God is a local call.

The Temple was where every Jew, no matter what his situation, could meet God. God did not want to be far away, He wanted to be next to his people and he wanted them to partake of his goodness.

Rabbi Avigdor Miller explains that the Temple was not merely a place of prayer and service, but was actually the dwelling place of God. "It was a stunning declaration of the principle that God's interest is not in the vast distances of space and in the millions of star-worlds, but in man alone."

This idea is alluded to in the following verse:

"They shall make for Me a sanctuary and I will dwell inside them." (Exodus 25.8)

The commentaries point out that the verse does not say, "I will dwell inside it," but rather "inside them." What is the meaning of this unusual phrasing?

The Temple was such a powerful reality that it inspired the Almighty's presence to dwell inside each and every Jew.

Life in the Temple environs was filled with constant miracles. In fact, to a large degree, natural law was suspended. Through the experience of the Temple itself, people realized that the Almighty was beyond these laws.

The Talmud (Avot 5:8) reports that 10 miracles were performed continually in the First Temple:

God provided these miracles so that the Jewish people could perform the Temple service without any impediments. The Almighty assured us that nothing in the world -- including nature itself -- would ever hold back the a Jew's ability to reach Him.

The Temple was not just for the Jewish People. When King Solomon built the Temple, he specifically asked God to heed the prayer of the non-Jew who comes to the Temple (Kings I 8:41-43). Non-Jews were also permitted to bring animal offerings to the Temple, as the prophet Isaiah referred to the Temple as a "House for all nations" (Isaiah 56:7)

Place of Torah and Inspiration

The Temple Mount is also called Mount Moriah. The Sages explain that the name "Moriah" is actually a play on words: "Moriah is the place from which instruction (horah) goes forth, from which the fear of heaven (yirah) goes forth; from which light (orah) goes forth." Jerusalem is the city of learning and insight.

The Midrash (Eichah Raba 1) says: "Wherever a Jerusalemite traveled, the local people would set up a bench so they could sit and listen to his wisdom."

For this reason, it is a mitzvah in the Torah (Exodus 34:23) for the entire Jewish people to visit the Temple three times annually -- on Passover, Shavuot and Sukkot. The very sight of the Temple with its great holiness, and the activity within it, would inspire a Jew toward respect for God and to the learning of the Torah. That is why the verse (Isaiah 2:3) says "From Zion (Jerusalem) Torah goes forth." The very act of going to Jerusalem would cause one to leave ("go forth") possessing Torah.

The image in the pupil -- the Holy Temple -- is also the reflection of oneself. Coming back to Jerusalem allows us to face, honestly and simply, our own essence. All the things precious that we hold deep inside somehow well up when we stand in this place. Questions that we never knew we had, are suddenly on our lips. Being in Jerusalem, the center of the world, is a time to let your soul soar.

Return to the Palace
Should I Break Up, Get Engaged or Keep Dating?
Time Is Your Precious Commodity
A Constant World in Flux
Comments
MOST POPULAR IN Tisha BAv
Our privacy policy