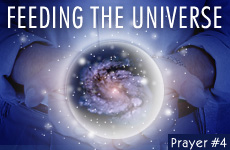 The physical universe contains a spiritual counterpart that acts as its soul. To thrive, the soul of the universe needs to be nourished by prayer.

The well-known book "Nefesh HaChaim" -- written by Rabbi Chaim Volozhin (1749-1821), one of the primary students of the Vilna Gaon, and the father of the Lithuanian Yeshivah Movement -- discusses of the most central fundamentals of Jewish belief, including prayer.

1. INCREASING THE PRESENCE OF GOD

The "Nefesh HaChaim" emphasizes that the intent behind blessing anything is to increase that which is being blessed. We know from the Kabbalah that this is why the word Hebrew word brachah, "blessing," begins with the Hebrew letter bait, which also represents the number two. Two, as opposed to one, represents more of something, and from this comes the idea that blessing something is to cause it to increase.

However, once we begin to talk about "blessing" God, as most blessings do ("Blessed are You, Lord, our God ..."), a philosophical dilemma is created. If God is perfect and lacks nothing, then "increasing" anything about Him is ridiculous to even consider. What could possibly be added to God when He is perfect already?

The dilemma is resolved by understanding that, even though, in essence God lacks nothing, He has set up creation in such a way as to give the impression that He is "revealed," or, "hidden." Even though the entire world belongs to Him, and He fills every part of it, nevertheless, He has a way of making His Presence obvious or not obvious to man, depending upon the needs of the moment.

For example, when a great miracle occurs in history, His Presence is strongly "felt," as it is when we do good deeds. However, during black periods of history when injustice seems to reign, it appears, for the time being, as if God has left us on our own.

Why does the Presence of God seem to fluctuate throughout history?

Why does the Presence of God seem to fluctuate throughout history?

According to tradition, God made creation this way to allow man to participate in history, as a "partner" with God, so-to-speak. What is our responsibility? To increase the awareness of God in creation, first for ourselves, and then, in the minds and lives of as many people as we can reach.

It is the awareness of God that can be "increased" or "decreased," depending upon the actions of man. When we act in a holy way, sanctifying His Name and creation itself, then, the Presence of God becomes more accessible to man, and nature stands aside for God. When, a sin is committed, just the opposite happens, and nature appears to have more control over creation than God Himself.

Hence, the Nefesh HaChaim explains, when we bless God, we are really saying: "Please increase Your Presence in creation."

And this, he emphasizes, is one of the main purposes of all prayer.

Another important idea that emerges from the pages of the "Nefesh HaChaim" is the concept of a universe that needs to "eat." Not exactly the way we eat and drink, but, close enough for us to draw a parallel between our lives and the life of the spiritual universe, which we are responsible to "feed."

The idea works like this: just as our physical bodies have a spiritual soul that allows the body to live and function, so too, does the physical universe "contain" a spiritual universe that acts like its own soul. Just like we need to eat and drink to keep our bodies and souls living together in harmony, so too, must we feed the spiritual world to keep creation "living."

Feeding the Universe does not mean standing on your rooftop and throwing pretzels and soft drinks heavenward!

That does not mean, however, standing on your rooftop and throwing pretzels and soft drinks heavenward! Rather, it is the additional spirituality and Godly light that our good deeds and prayer draw into the spiritual realm that feeds the spiritual universe. The more we do this, the more the spiritual creation thrives and the better physical life becomes, allowing us to achieve such sought after goals as peace on earth for all mankind.

The implication of this parable is far reaching. For example, even what might normally be considered healthy food, when it goes bad, can do more harm than good to our bodies and our health. Not only does the body reject the food, but, it becomes weak from it as well, and, as the "Nefesh HaChaim" explains, the soul is unable to adequately fill the entire body.

Likewise, if prayer is food for the universe, then insincere and even disrespectful prayer might not only not feed the spiritual world, but make it spiritually "ill," resulting in chaotic and difficult periods of history.

The spiritual world will reject such prayer or bad deeds, and will suffer as a result, which has its affect on us.

The Zohar asks us to "prepare a table for the Master," explaining that this means learning Torah, doing good deeds and praying properly.

This means: don't just throw you prayer heavenward, as if throwing scraps of food to a dog. Prayer has to "prepared" and "packaged" nicely in order that "eating" should be a dignified experience for heaven. In other words, how we pray and where we pray is important just as is what we pray.

Even the clothing we wear during prayer makes a difference when it comes to "feeding" the spiritual universe.

Seizing Change
The Promise Of The Land
Which Chat Are You On?: Parshas Behar/Lag Ba’Omer
Do You Like Slow-Cooked Food? Thank the Jews
Comments
MOST POPULAR IN Spirituality
Our privacy policy