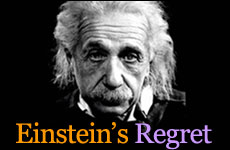 Despite time and space being relative, our ability to try is a constant.

Yesterday I took my toddler to the Einstein exhibit at the Science Museum in Jerusalem. My son was fascinated by the speed of light model, and I was stunned by the following quote from an interview with Einstein: "Had I known that the Germans would not succeed in developing an atomic bomb, I would have done nothing."

I stood spellbound as the film kept replaying Einstein expressing his profound fear and ambiguity about one of the greatest discoveries of mankind. Here was one of the most famous pacifists in history, and he had created the formula for weapons of mass destruction.

Sometimes a person has to create tools of war for the sake of peace.

But with misty eyes, Einstein explained how sometimes a person has to create tools of war for the sake of peace. And as I ran after my toddler, who quickly lost interest in the film, I couldn't shake this image from my mind. In the last picture, I saw the genius of the 20th century with that far away look in his eyes, speaking of the unfathomable burden of responsibility that will forever haunt him.

I was impressed with the courage that type of regret demonstrates. After all, Einstein did change the history of WWII with the invention of the atomic bomb. His formulas paved the way for tremendous leaps of progress for mankind. And despite the heroic intentions, he still had regret.

It got me thinking about other levels of regret in our lives. I once read an article about a father who lost a young daughter. He wrote about how the night before she tragically died, his eight-year-old daughter had asked him to read her a bedtime story. But he was tired after a long day at work. And he had a file that his boss had asked him to finish at home. And the morning newspaper still lay untouched in his briefcase.

When his daughter died, his grief was inextricably mixed with regret for those few moments in time. Why didn't I just put down my work and read one story? All she wanted was five minutes of my time! But how could the father have known that there wouldn't be a tomorrow?

A few weeks ago my grandfather passed away. As I was leaving for the airport to go to the funeral, one of my daughters said to me, "Grandpa isn't really gone."

I was very close to my grandfather and I was having a hard time keeping my composure. "Adina, he is gone," I said as the tears rolled down my face. But my eight-year-old daughter shook her head and whispered, "Grandpa is still here. Because he's a part of you, and he's a part of me. And he always will be."

Grandpa had one of those rare souls that radiated kindness. His eyes were always filled with a smile. And anyone who knew him felt the warmth of his goodness. And Adina was right. He had given so much love and time to his family that even his great grandchildren had absorbed pieces of his beautiful soul.

A few days later, I walked through my grandparents' house, picking up photographs that told a story of a life lived with very few regrets. The house was empty, but the walls of the house still had that warm scent that had graced my childhood. Everywhere I looked I saw signs of life. A hat. A jacket. A pair of glasses next to the phone. How could Grandpa be gone? I felt the weight of air push down on me as I stood in the kitchen that had once been my haven. This was the place where chocolate-covered marshmallows had erased all troubles; this was the place where the love of grandparents' had transformed a little girl's life.

We can't see what tomorrow will bring, but we can use our talents today.

And clawing its way towards me was the unwelcome visitor of regret. Maybe I could have... Maybe I should have...And I looked out at the rotting wooden deck and wondered: Did Grandpa even know how much I loved him? Will he ever know how much he is missed? This haunted me as I tried to leave, but I remembered my daughter's words as I turned the key. Grandpa knows. Of course he does.

But regret is a cunning follower, and it seems that it will always be a part of our lives. Even when we create beautiful works or discover amazing ideas, there will always be a voice that says: "If only I had known then what I know now." But we don't ever know.

Ever since I learned the Myth of Sisyphus in college, I hear that essential question over and over again in my mind: Does life have a purpose? It cannot be that we are like Sisyphus, condemned to rolling a rock up a mountain for no reason other than to watch it roll down.... And push it up again. It cannot be. If we lived our lives this way then all we would have is regret.

But if we live purpose driven lives then our regret can be a tool for future greatness. Einstein couldn't predict how his discoveries would be used. And we can't see what tomorrow will bring. But we can use our talents today. We can say ‘I love you' today. We can read to our children today.

What if Einstein had done ‘nothing?' What would our world have looked like today? What if we shy away from success purely out of fear that someday we will fail? And what if we never come close to those we love because we are afraid to lose them? That is why there is an aura of courage and strength that follow in the wake of Einstein's words. The real regret would have been in not trying at all. And despite time and space being relative, our ability to try is a constant.

This article is dedicated in memory of my beloved grandfather, Aaron Yechiel ben Anshel.

"Remember You Are a Jew!": Inspiring True Story

A Handicapped Look at Disability

On the Death of Rabbi Zecharia Wallerstein
Live Abortion Panel
Morality and Abortion: Three Views
There Are No Limits
Comments