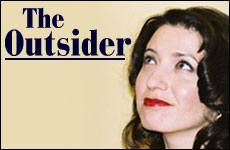 Ophira Eisenberg is a little bit of an outsider. But that's what makes her funny.

Ophira Eisenberg has always been a little bit of an outsider. She is a female comedian in an industry dominated by men, a Canadian living in New York, and growing up in a small city she was the only Jewish person in her school. Back then, she felt hobbled by her differences, but now she is identified by them.

The first thing that identifies her is of course her name – Ophira. "My name is very, very old," explains Eisenberg. "So old that it's in the Bible. King Solomon named his first gold mind Ophir. So you slap an "a" on the end of that, and then you have Ophira. No one ever gets my name right. Usually people think it's either Ophelia or Oprah. The weirdest one that I got was, ‘What was that? Your name is Furer?' Yes, my Jewish parents named me Furer. Furer Eisenberg – it's a very popular Jewish name. But when I meet people from Israel, they all get very excited. The next thing I know, I am invited for Friday night dinner."

Ophira is not the only one who has the distinction of a name in her family. "There are six kids in my family," she explains, gearing up the onslaught. "Their names are Eli, Ilan, Orna, Ophira, Avigail, and Amir. My Dad was the motivator behind the names because he is Israeli. My mother is Dutch and when they moved to Canada, they didn't speak much English so they couldn't give us Canadian names like Tyler or Brittany. But they also didn't know how to spell our Hebrew names in English. So two of my brothers' names are spelled E-L-L-Y and I-L-A-A-N. Yes, that's two "A"s in Ilan. Poor guys, if they ever went to Israel they would probably get beaten up"

Ophira admits that some people in the entertainment industry advised her that changing her name might be a wise career move, but she declined. "It identifies me as a Jew and I have always been very proud and happy to be Jewish. True, I didn't get booked for the German Nationalist Party convention, but that's not really the audience that I am going for."

"It identifies me as a Jew and I have always been very proud and happy to be Jewish."

While she is proud of her background now, as a child growing up in Calgary, she admits that it was difficult being different. "I didn't have a lot of Jewish culture around me. I didn't know there were people celebrating Passover or going to shul on high holidays. I was the only Jewish person in my high school! All of my friends thought I was some curious weird animal and would ask me questions that to be honest, I didn't know how to answer. I would say things like, 'At shul they just serve cake all the time.' Or 'Synagogue is like Saturday Night Live with the rabbis putting on funny skits.' There were so few Jews in my city, that I felt like if I ever came back to town from a vacation or something, I would high five the other Jew in the city – 'tag him out' to let him know that I was taking over and now he could leave."

When she decided to pursue a career in comedy, she left that "one Calgarian Jew" on his own, and headed for New York. Now in a city with over 1 million Jews, Ophira thought that perhaps, finally, she'd no longer be treated as an outsider. But it was not to be. Now she was singled out for being Canadian. "People often ask me why Canadians are so funny and I think it's because we are outsiders. We are not Americans, so we are not in the thick of problems that Americans are dealing with, but at the same time, we are close enough to know what's going on and can comment on it. In many ways, it's similar to the reasons why Jewish people are so funny."

Don't feel too bad for Ophira. Her experiences as an outsider have started to pay off comedic dividends, as she now periodically tours with a group of Jewish female comedians in a show titled "Jewish Girls Gone Bad." She points out that these types of culture specific comedy shows are growing in popularity. "Lots of people want to go to shows that are geared towards their community. People want to celebrate their own identities. I have appeared at a bunch of Jewish shows over the years and there is a real need for that. We get everyone from the kids fresh from Birthright to some of the oldest guys I have ever seen. They want some way to connect with the fact that they are Jewish, and our shows give them a way to do that."

"They want some way to connect with the fact that they are Jewish, and our shows give them a way to do that."

Asked what it was that she thinks makes Jewish people so funny, she concludes that it must have something to do with our tragic past. "With any people who suffer tragedy, it's a recipe for comedy. Not right away mind you, but at some point – you have to deal with what happened to you, and humor is one of the ways you can do that. The mathematical equation goes something like this: tragedy + time = hilarity. Tragedy creates tension and tension creates humor. That's why comedy clubs have people sitting so close together – tension."

When asked if she herself was able to make light of her own personal tragedy – a car accident as a child that left her seriously wounded and took the life of her best friend, Ophira admits that perhaps not enough time has passed to allow her to make light of the situation. However, she does say that, "one of the lessons I learned was that life could be taken away from you at any moment, so you might as well laugh."

Over the past few years, Ophira Eisenberg has been making audiences do just that -- laugh. Whether it's on Comedy Central's Premium Blend, on her weekly comedy showcase called Paprika, or one of her many tour dates, she is serious about the funny business. To what does she owe her appeal? "I guess in many ways, I am an outsider – a Canadian Jewish girl from a small town. And maybe that's why people find me funny."

Abraham Lincoln and the Jews
The Softball Player
How This 6 Generation Bread Baker Brought Back Israel’s Ancient Grains
Olivia Newton John’s Grandfather was a Nobel-Prize Winning Jewish Physicist
Comments
MOST POPULAR IN Jewlarious
Our privacy policy
Aish.com Is Looking for Great Writers