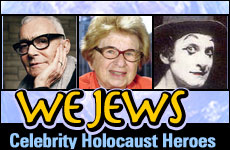 Names such as Elie Wiesel and Simon Wiesenthal are synonymous with Holocaust survival, and heroism. Yet there have been celebrities in other venues whose early “war” stories and contribution to the State of Israel are often unsung or have surfaced much later. Each has been influenced by these experiences, and has used them to influence, contributing mightily to the Jewish people and to humanity.

Today we reveal the often unsung achievements of three and honor them.

Marcel Marceau: Walking Against the Wind

He was a mime without peer, beloved and admired worldwide as a performer (which included his alter ego Bip the clown), a director, educator, and ironically, interpreter and multilingual public speaker. His silent exercises and satires such as “Walking Against the Wind” and “Ages of Man” were considered genius, and communicated the human condition in a time frame that couldn’t be duplicated by most novelists.

“Do not the most moving moments of our lives find us without words?" – Marcel Marceau

Yet part of the mission for the man who wanted to spread “art of silence" (L'art du silence”) was born from unspeakable tragedy, and heroism.

Marcel Marceau was born on March 22, 1923 in Strasbourg, France, to Ann Werzberg Mangel and Charles Mangel, a kosher butcher. In 1944, his father was sent to Auschwitz, and murdered by the Nazis. His mother survived. That same year, Marceau and his brother joined the French Jewish resistance under the command of his cousin, George Loinger. Their task was to evacuate Jewish children hidden in an orphanage, to Switzerland. Said Loinger: "He had begun doing performances in the orphanage, where he had met a mime instructor earlier.” Marcel kept the children as quiet as possible by teaching them the art, and saved hundreds of lives.

After the liberation of Paris, Marceau joined the French army where he arranged the surrender of 30 German soldiers when they ran into Marceau's unit in a German field. Marcel, who spoke perfect English, was also liaison officer to General Patton's army.

He went on to extraordinary success yet, says Loinger, his genius was honed by his past: "You see the pain and the sadness in his mime skits. The origin of that pain was his father's deportation."

Among his many honors, in April 2001, Marceau was awarded the Wallenberg Medal by the University of Michigan for humanitarianism and acts of courage in aiding Jews and other refugees during World War II.

Known affectionately as “Dr. Ruth,” the little 4-foot-7 dynamo has made a big impact on the world with her outspoken views on relationships. Who would guess that this diminutive bubbe was trained as a sniper for the forerunner of the IDF?

The only child of Orthodox Jews, Julius Siegel and Irma (Hanauer), the future Dr. Ruth was born Karola Ruth Siegel in Germany in 1928. In 1939, after her father was taken by the Nazis, her mother and grandmother sent her to an orphanage in Switzerland to keep her safe from the scourge. Their letters stopped in 1941. In 1945, Westheimer learned that her family had been murdered, possibly at Auschwitz.

Now orphaned, she moved to Israel and joined the Haganah. She had received training as a sniper. Said Westheimer: “I was incredibly accurate throwing hand grenades, too. Even today I can load a Sten automatic rifle in a single minute, blindfolded." However, she was seriously injured during the Israeli War of Independence when a cannonball from Jordan smashed the barracks where she was living, and it was months before she could walk again.

In 1950, Westheimer moved to Paris and studied psychology at the Sorbonne. After immigrating to the U.S. in 1956, she earned a Ph.D. from Columbia University.

Despite her fame, she still lives in the cluttered apartment in Washington Heights where she raised her children in order to remain close to the synagogues she belongs to, the YMHA she was president of for three years, and the still sizable community of German Jewish World War II refugees in the area.

Dr. Ruth has spoken out against injustice in her work, in her commemoration of Yom HaShaoh, in her life story. Among her many achievements, in 2002, she received the Leo Baeck Medal for her humanitarianism.

Beloved by all, Dr. Ruth credits her ability to walk into any situation and discuss intimate topics, in part, to her background.

“I am what you call bold, because the one thing that I've learned coming out of Nazi Germany is that I have to stand up and be counted for what I believe.” – Dr. Ruth

In the 1960s, the fashion world was dominated by a few stellar talents; one of whom was Vidal Sassoon, with his trademark architectural bob worn by all from A-listers to housewives. Yet, the man known as “a rock star, artist, and craftsman who changed the world with a pair of scissors” was born into a very different world on January 17, 1928.

The son of Jewish parents in Hammersmith, London, Sassoon’s father, Jack, left the family when Vidal was three. His mother Betty, struggled to raise him and his younger brother, but was forced to put Vidal in a Jewish Orphanage when he was five. His brother followed. Vidal spent seven years in what he later called, “the first house I lived in that had a bathroom with hot water. If you live that kind of life, you never forget it. Or you shouldn't even try to forget it.”

At 14, when Betty had a "premonition" that Vidal would become a hairdresser, an apprenticeship was arranged, and the boy who dreamed of becoming an architect starting shampooing. Within a few years, he was leading a double life. At 17, with the horrors of the Holocaust still fresh, he joined the underground 43 Group, whose mission was to prevent Oswald Mosley's far-Right movement from spreading hatred and anti-Semitism. The group was active in breaking up their meetings in East London.

But more, Sassoon became an ardent Zionist who went to Israel in 1948, joined the Palmach and fought in the War for Independence. He described training with the Israelis as "the best year of my life. When you think of 2,000 years of being put down and suddenly you are a nation rising, it was a wonderful feeling. There were only 600,000 people defending the country against five armies...”

Sassoon might have remained in Israel, had he not received word from mom Betty that his financial support was needed at home. He reluctantly returned to hairdressing, taking on a confidence he’d learned in Israel. He’d give it his all – and by blending his love of architecture with his hairdressing skills, he revolutionized the fashion industry.

In 1982, Sassoon started the Vidal Sassoon International Center for the Study of Anti-Semitism (SICSA), devoted to the interdisciplinary gathering of information about Anti-Semitism. Among his many awards, in 2009, Sassoon was appointed Commander of the Order of the British Empire (CBE).

“I just have a certain pride in the tribe... I feel very humble, in a way, that we produced so many incredible people, and there's only 13 million of us in the world, and we still keep producing.” – Vidal Sassoon

An Andy Kaufman Story
Why Are The Prayers Of Yom Kipur So Repetetive?
Ha'azinu 5783: A Time for Unity!
Twisted Thinking
Comments