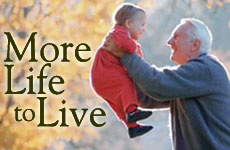 Mr. Meyer had less than a 1% chance walking out of the hospital. But that was only according to science.

While on call for my internal medicine group, I was preparing to go to the hospital to make rounds when my three-year-old daughter, Julia, came running in.

"Mom!" she squealed, giggling, "Come look!" She grabbed my hand and led me to the window where her four-year-old brother, Joey, was intently looking into the garden.

"Isn't that silly?" she laughed. "The birdy is sleeping in the mud!" I looked down and saw a bird lying motionless, eyes closed, in the dirt. One look and I could tell it wasn't sleeping.

"He's even snoring," Joey said. "His beak is moving up and down."

I looked closer and saw nothing moving. "Honey, I'm not seeing anything."

Not having the heart to tell them the bird was dead, I launched into a physiology lesson. "See guys, under the feathers? That's where the lungs are... do you know what the lungs do?"

My son rolled his eyes. The child of a doctor, he had been through this before. "Yeah, mom, I know -- they help him to breathe, I know, I know. But the bird is breathing!"

Again, I could see nothing.

I was just about to stammer something about Heaven when my husband came home. Relieved, I gave a quick explanation to him about the bird, grabbed my patient list, and headed to the hospital, leaving the kids sitting vigil over the bird.

As I looked closer at the list, one of the names seemed familiar: Mr. Meyer. Then I remembered -- three weeks prior, while on call, I was called by the ER about him. He was an 82-year-old man with a history of myelodysplasia (a pre-malignant condition), severe anemia, who had suffered a major heart attack and because of that fluid was building up in his lungs. I recalled going into his room; the terse and clipped voices of the doctors and nurses surrounding his bed confirmed what I had already suspected -- the situation was grave.

The ICU team was assessing him, the attending doctors yelling orders to the residents, the x-ray techs were running in and out with their machines, nurses were drawing blood, and medical students were running in with critical lab values. At the center of all this commotion was Mr. Meyer, lying motionless, his eyes closed, a tall man who seemed shrunken and pale.

Machines taking care of his every vital function dwarfed him, each flashing numbers. And to the ICU team, that's what he was -- a bunch of numbers, none particularly promising. The blood pressure was too low, the heart rate too high, the hemoglobin too low, the troponin too high. The cardiologist and hematologist stood outside conferring on what measures to take to best tweak the numbers in his favor. I joined them, but I think we all realized this was futile. We knew the statistics and they were grim. An elderly patient with a pre-existing malignancy, put on life support, has less than 10% chance of leaving the ICU and less than a 1% chance of walking out of the hospital.

Perhaps the most important one was the one that went unnoticed -- the number tattooed on his arm.

So many numbers, yet perhaps the most important one was the one that went unnoticed -- the number tattooed on his arm.

Then I saw Mrs. Meyer, huddled in the corner, her eyes horrified as she peeked out from behind her hands while watching her husband of over 50 years being swarmed on by the staff. I introduced myself, and as her eyes beseeched me to give her some hope, I didn't have the heart to tell her what I knew to be true, so instead I relied on physiology. "Uh, well, his heart suffered damage and isn't pumping really well and is causing fluid to build up in his lungs..."

At that point I realized her eyes had completely glazed over. The most I could muster was "He is being taken care of by some of the best ICU doctors in the city and they are working their hardest." I introduced her to the attending team who would be admitting him, but as I left the ER, I remember feeling very unsatisfied. Medical science has advanced so far that we are able to keep gravely ill patients alive, but often I wonder -- to what end?

I was thinking about all this as I drove to the hospital to make rounds. As I walked towards Mr. Meyer's room I was wondering what sort of medical limbo had he now been thrust into: A coma? A vegetative state?

I certainly was not prepared for what I saw.

"Good morning!" boomed a voice with a faint European accent.

I looked over, and there he sat, stately and tall, quite a presence even in his hospital gown.

"Well, I feel okay, but they are telling me I'm pretty sick." A quick read of his chart showed he had a very complex hematologic problem that had two prominent hematologists and a cardiologist at odds on how to treat him. "I'm having my records sent to some big shot hematologist in Israel -- he's a friend of my daughter's. She's a doctor there."

Referring to the number tattooed on his arm, I asked him where he was from.

"Lithuania. In Latvia and Estonia they killed all the Jews, but in Lithuania," he said somewhat wryly, "they needed roads and bridges. So we got to stay in work camps and do their work. Until 1944, when the Russians came and I was transported to Dachau."

As he described Dachau his eyes took on a steely glare. "The filth, the sickness, the work ... but through it all," he said resolutely, "I wanted to live, I needed to live. I lost so much weight but even then I knew I had to survive. A Nazi soldier befriended me and would give me extra bread -- I guess he saw something in me.

"But I remember the last time he took me into his office to give me bread. He looked at my body -- so thin and covered with sores, and I could tell by his look he had given up on me. I didn't get the extra bread.

Feeling slightly ashamed that three weeks earlier I had probably given him a similar look as the Nazi, I stammered, as sort of an apology, "No, I really can't believe it."

"I went back to the barracks feeling very weak," he continued. "It was only then that I felt I might die. But then the next day, a miracle happened -- we were liberated!"

Perhaps even more amazing, his mother and sister had both survived (his father having died previously) and were reunited in California where Mr. Meyer established a successful real estate business and raised a family.

He looked up sadly. "So now they're telling me there is nothing more they can do… but I have so much more life to live."

In the ten years I have been practicing medicine I have seen so much that can't be explained away by science.

I looked at him, his power and strength emanating from him even as he sat tethered to IV poles. His eyes pleaded with me to give him some sort of an answer. At the time, fully believing it, I said, "You know, Mr. Meyer, you just might get another miracle."

His wife, with tears in her voice, held his hand and whispered, "I told you so."

As I drove home I reflected on the nature of miracles. In the ten years I have been practicing medicine I have seen so much that can't be explained away by science. So many times, by sheer will, patients live much longer than we expect, and then other patients who give up, die of non-life threatening illnesses. And each time, it's amazing.

When I got home my two little kids practically pounced on me. Julia was so excited she could barely talk.

Puzzled, I looked at my husband for help. He mouthed, "The bird."

"What?" wondering what slight of hand my husband had done to convince them it moved.

I looked at him and he whispered, "It's true."

"See Mom," my four-year-old son said very seriously, clearly annoyed I had ever doubted, "I told you he was alive!"

"He was sleeping, he got up, and he flew away," my daughter exclaimed, her blue eyes shining. "Isn't it great?!"

Last I heard, Mr. Meyer had gotten out of the hospital and received his second opinion -- from his daughter's friend, in Israel, where he is visiting for two months.

The Jew from Kuwait

Aish.com's Top 10 of the Decade

Even I'm Worthy of Miracles

Coming Home From Ramallah
The Power Of Prayer
Va’etchanan 5782: A for Effort
Can You Show Me This "God?"
Comments
MOST POPULAR IN Spirituality
Our privacy policy
Aish.com Is Looking for Great Writers