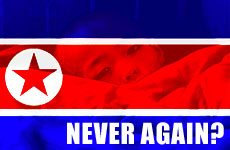 Gas chambers. Poisoned food. Torture. Families murdered en masse. How much more do we need to know about North Korea's crimes before we act to stop them?

Two words -- "never again" -- sum up the most important lesson that civilized men and women were supposed to have learned from the 20th century. It is forbidden to keep silent, forbidden to look the other way, when tyrants embark on genocide and slaughter -- if Auschwitz and Kolyma and the Cambodian killing fields taught us nothing else, they taught us that.

Or so, at any rate, we like to tell ourselves. As Samantha Power discovered upon returning to the United States after two years as a war correspondent in Bosnia, the lesson of "never again" is invoked far more often than it is applied.

"Everywhere I went," Power recalled in a speech at Swarthmore College in 2002, "I heard 'never again.' Steven Spielberg's 'Schindler's List' had been a smash hit. The Holocaust Museum had opened on the Mall in Washington. College seminars were taught on the 'lessons' of the singular crime of the 20th century. But why, I wondered, had nobody applied those lessons to the atrocities of the 1990s: the systematic murder of 200,000 Bosnian civilians in Europe between 1992 and 1995 and the extermination of some 800,000 Rwandan Tutsi in 1994.

Power went on to write A Problem From Hell, her Pulitzer Prize-winning account of America's failure to intervene in the genocides of the 20th century. The book was hugely and deservedly praised. It made clear, as no previous book ever had, just how much Americans knew about some of the most horrific massacres of the last century even as they were happening, and how little we did to stop them -- or even, in most cases, condemn them.

Which brings us to North Korea.

It is not exactly news that the communist regime of Kim Jong II has sent millions of North Koreans to early graves. Estimates back in 1998 were that as many as 800,000 people were dying in North Korea each year from starvation and malnutrition caused by Kim's ruthless and irrational policies. World Vision, a Christian relief organization, calculated that 1 million to 2 million North Koreans had been killed by "a full-scale famine" largely of Pyongyang's creation.

"I witnessed a whole family being tested on suffocating gas and dying in the gas chamber. The parents, a son, and a daughter."

Nor is it breaking news that North Korea operates a vicious prison gulag -- "not unlike the worst labor camps built by Mao and Stalin in the last century," as NBC News reported more than a year ago. Some 200,000 men, women, and children are held in these slave-labor camps; hundreds of thousands of others have perished in them over the years. Some of the camps are so hellish that 20 percent or more of their prisoners die from torture and abuse each year. The dead can be of any age: North Korea's longstanding policy is to imprison not only those accused of such "crimes" as practicing Christianity or complaining about North Korean life, but their entire families, grandparents and grandchildren included.

And of course it is widely known that Kim is openly pursuing nuclear weapons, has fired missiles capable of reaching Japan, and controls one of the largest military forces on earth.

All of this is hideous enough, and more than sufficient reason for making Kim's ouster -- and his prosecution for crimes against humanity -- an explicit goal of the United States. But now comes something new.

"I witnessed a whole family being tested on suffocating gas and dying in the gas chamber. The parents, a son, and a daughter." The speaker is Kwon Hyuk, a former North Korean intelligence agent and a one-time administrator at Camp 22, the country's largest concentration camp. His testimony was heard on a television documentary that aired last week on the BBC. "The parents were vomiting and dying, but till the very last moment they tried to save the kids by doing mouth-to-mouth breathing."

Like other communist officials, Kwon was not bothered by what he saw. "I felt that they thoroughly deserved such a death. Because all of us were led to believe that all the bad things that were happening to North Korea were their fault… Under the society and the regime I was in at the time, I only felt that they were the enemies. So I felt no sympathy or pity for them at all."

Another eyewitness was Soon Ok-lee, who was imprisoned for seven years in a different North Korean camp. She described the use of prisoners as guinea pigs for biochemical weapons.

"An officer ordered me to select 50 healthy female prisoners," she testified. "One of the guards handed me a basket full of soaked cabbage, told me not to eat it, but to give it to the 50 women. I gave them out and heard a scream…They were all screaming and vomiting blood. All who ate the cabbage leaves started violently vomiting blood and screaming with pain. It was hell. In less than 20 minutes, they were dead."

Gas chambers. Poisoned food. Torture. Families murdered en masse. Staggering death tolls. How much more do we need to know about North Korea's crimes before we act to stop them? How many more victims must be fed into the gas chambers before we cry out "never again!" -- and mean it?

After Malaysia Bans Israeli Athletes, Committee Does the Right Thing