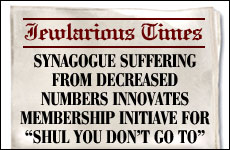 Faced with dwindling membership, many synagogues have fallen upon harder times, and have been forced to find new ways to maintain and increase revenues. But one "shul" in the Detroit area has hit upon an entirely new and innovative method of increasing their revenue.

Beginning January 1st 2007, congregation Ohav Tzeddakah will be offering a new type of membership: they can become the synagogue you won't enter.

"We're very excited about our new level of membership," said the Stanley Buckman, President of the congregation. "Make us ‘the shul you don't go to' -- for just $250 a year you can proudly boast that you won't set foot in our Shul."

Membership doesn't include a seat in the minyan or prayer services, but does allow entrance into the kiddush club, provided you complain loudly about the shul, its board and/or its Rabbi. Other benefits include the right to throw someone out of his or her seat during the High Holiday services, and to oppose pay raises for the rabbi and his staff.

"We expect this to be a great success!" said Ron Markowitz, Ohav Tzeddakah's treasurer. "Plans are already underway to build a new extension to the sanctuary to accommodate the new non- members. The new sanctuary will be located in an awkward location, hopefully outside of the bathroom."

13 Reasons Why I Love Israel
Korach 5782: Visit to Lift the Spirit
That Time The Ivy League Found A Way To Limit Jewish Enrollment
Would You Rather Be Right or Happy?
Comments
MOST POPULAR IN Jewlarious
Our privacy policy