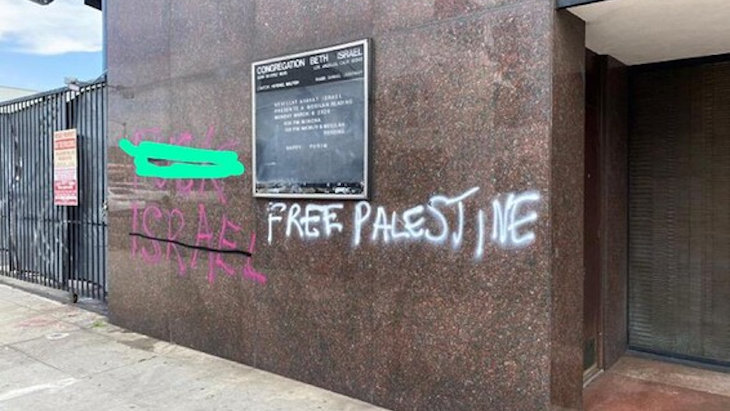 The murder in Minnesota is horrific. It's shocking to me that that level of police racism, abuse and brutality still exists. Unfortunately, the reaction is no way to right the wrong.

We’ve been in Los Angeles for 37 years so along with the recent rioting, we experienced the 1992 Rodney King riots. I thought then, as I think now – that the stories that sparked the riots are terrible, speaking of unbearable pain and injustice – but that I really don’t see a connection between racism/police brutality and looting Louis Vuitton stores or Target or the local mom and pop shops...I don’t understand how or why graffiti on synagogues is in any way an appropriate response.

Does anyone really believe this is the way to right the wrongs? Is any and all anger and violence justified in the face of racism?

And I thought then, as I think now – how unfortunate that the young go out and destroy that which it took their parents years to build. In 1992 many stores were burned and ransacked in the very neighborhoods where the rioters lived, enterprises that their parents had spent the previous 40 years building. There is energy among the young; there can be vision and idealism but so much lack of perspective.

The Torah is frequently admonishing us to know our place. This means to recognize our unique strengths and weaknesses, to focus on the hand we are dealt and not the one we wish we were dealt or the hand that others were dealt. Certainly an aspect of this is recognizing the strengths and weaknesses of our age. What wisdom and life experience am I lacking at 25? What physical strength and drive am I lacking at 60? It is only with those recognitions in mind that we can make wise decisions.

In the book of Kings, there is a story about Rechovoam, the son of King Solomon. When he took over the throne the coffers were depleted and he very much wanted to impose a heavy tax on the people. His older advisers suggested that he wait. He should take time to consolidate his power and build a relationship of trust with the people. His younger advisers were less patient. They reminded him of the heavy taxes his father imposed and suggested that he impose even heavier ones! Young himself (and eager for the income), Rechovoam listened to his younger, more “sympatico” advisers. This ultimately led to the deaths of the tax collectors and the splitting of the kingdom.

I don’t expect such dire consequences now. I am hopeful that, having survived riots in the past, the city of Los Angeles (and other cities across America) will survive them again. I think that with the good will of the majority of the American people, and with the Almighty’s help, we will survive and recover. But...

Of course the timing is terrible. Just as stores and malls were about to open up, they have been looted and destroyed. In their naive desire to punish “the rich” they end up hurting themselves. For all the landlords and store owners who are taking a hit, there are hundreds, probably thousands of lower income workers who are hurt by this destructive behavior. Without perspective, we end up damaging the very people we want to help.

The Mishnah in Ethics of Our Fathers teaches: “Who is the wise man? The one who foresees the consequences.” This is so powerful. We are all susceptible to our emotions. We all have the potential to react in negative ways out of anger, pain, frustration, jealousy – you name the bad character traits, we all have them! But a wise person doesn’t just stop himself because he doesn’t want to listen to his negative self (although that’s certainly an important component); a wise person stops himself because he sees the future consequences. Where will this lead? Will it accomplish my goals? Will it encourage others to join our mission or alienate them?

What happened in Minnesota was an appalling tragedy. There are no words to adequately convey how wrong and terrible and painful it was. It is shocking to me that that level of police racism, abuse and brutality still exists. And justice must be meted out.

Unfortunately the reaction was also wrong. We haven’t learned from recent history and we haven’t learned our lessons from the Prophets either! Maybe, just maybe, we can learn them for the future.