With Rifle and Baby in Hand 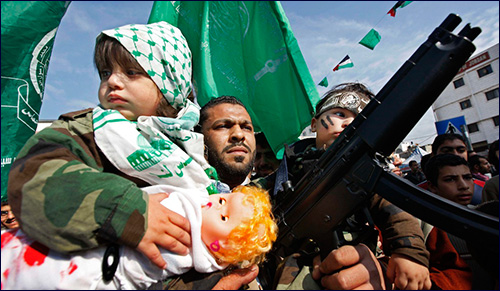 Hamas’ perversely brilliant strategy in using human shields should serve as a wakeup call to all of humanity.

In the nuclear age, more nations have the capacity to totally obliterate not only other countries but the entire world as well. With unprecedented and unlimited power comes the fear that civilization is doomed. Will the world end as it began, with a big bang not of creation but of final and total destruction?

To prevent this doomsday scenario concerned leaders have placed their hope on disarmament treaties, on limiting the muscle of the mighty, and the deterrence of MAD – mutually assured destruction where the threat of using strong weapons against the enemy prevents the enemy's use of those same weapons. It has been almost universally assumed that evil can only triumph when the wicked are stronger than those whom they seek to destroy.

That’s why recent events offer such a shocking revelation.

Civilized societies, it now becomes evident, have a moral weakness that can be taken advantage of by those far more vulnerable. What Hamas has demonstrated in its war against Israel is a “weapon” so ingenious that if adopted on a massive scale would make it impossible for any enlightened country, no matter how powerful, to defeat its enemy.

Imagine this scene. An entire army goes into battle with a rifle in one hand and a baby in the other. The first is meant to murder, the other to prevent their opponents from returning fire. They pillage, they rape, they conquer, secure in the knowledge that their protection is the moral code of their victims whose developed conscience - and perhaps fear of critical judgment from the media for their insensitivity to the safety of infants - doesn’t permit them to respond.

It is a perversely brilliant strategy. It neutralizes every weapon, no matter how advanced. It gives the advantage to those who have no regard for the sanctity of life. It empowers precisely those willing to forgo every last vestige of civilized behavior over people still committed to their humanity.

This is what Amos Oz so perceptively voiced in a remarkable interview he gave to the German magazine, Deutsche Welle. Oz has for the longest time been considered in the left wing camp of Israelis. Nevertheless, when speaking to a journalist who was about to ask him his views on the Gaza conflict, here is how he began:

Amoz Oz: I would like to begin the interview in a very unusual way: by presenting one or two questions to your readers and listeners. May I do that?

Question 1: What would you do if your neighbor across the street sits down on the balcony, puts his little boy on his lap and starts shooting machine gun fire into your nursery?

Question 2: What would you do if your neighbor across the street digs a tunnel from his nursery to your nursery in order to blow up your home or in order to kidnap your family? With these two questions I pass the interview to you.

Of course there was no answer.

I have been obsessively watching the phalanx of pundits who with righteous indignation continue to condemn the Israeli military for their cruelty in harming those purposely placed amidst the rockets and munitions indiscriminately aimed by Hamas at civilians throughout the land of Israel. Their mantra, repeated even by the President of the United States, is always that Israel is certainly allowed to defend itself – but “has to do more” not to cause any harm to those purposely placed in positions to protect their attackers.

Not one of these wise men has ever come up with any feasible suggestions as to how that could be accomplished. “Knocks on the roof,” personal phone calls, leaflets urging civilians to leave areas requiring military action are never enough to placate those who come with preconceived judgments that eerily smack of the anti-Semitic blood libels with which Jews have been viciously slandered throughout the centuries.

What none of these critics seem to realize is that the Jews, as has often been pointed out, are the canary birds in the coal mines of history. When coal miners would descend into the depths they always took canaries with them because they were afraid of the toxic fumes that were not immediately detected by humans but would first kill the canaries and serve as ample warning to them. The canaries died first, but the miners knew that if they did not take heed, they were next.

The ultimate tragedy will be that evil will triumph because good people were too good to fight it.

Jews have always been the first victims of those with far more grandiose goals. Nazi Germany began with the Jews but their real plan was world domination. So too, radical Islam verbalizes it: “First we will take care of the people of Saturday, then we will finish off those of Sunday.”

For Christians, we’ve already seen what their fate will be like if ISIS and its ilk succeed with Iraqi victims of beheading for those who refuse to convert to Islam. But for now it has been only Jews who have been targets of the heinous strategy of human shields.

As a member of “the canary family” allow me to raise the warning to the United States as well as any other countries burdened by the constraints of conscience: Hamas’ tactics are waiting in the wings - and that those plotting the destruction of civilized societies with the ideology of shielding babies under one arm and bullets in the other may well be a greater and more realistic threat to the world’s survival than a nuclear holocaust.

The ultimate tragedy will be that evil will triumph because good people were too good to fight it.

Hollywood Insider Who's Defending Israel
It Takes A Lot Of Faith To Be An Atheist
How Instagram Brought Back This Nostalgic Soup
What Makes Eli Run?
Comments
MOST POPULAR IN Current Issues
Our privacy policy