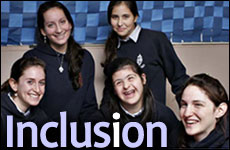 Paving the way for our children with developmental disabilities.

They told him it couldn't be done. Nobody wanted children with developmental disabilities in regular classrooms, so better just forget about it. But "they" -- the top brass of the Los Angeles Jewish educational establishment -- were no match for the determination, idealism and energy of Terry Magady and his wife, Holly.

Fifteen years ago, the Magadys' daughter, Danielle, was born with Down syndrome. When she was only a toddler, the Magadys began searching for a way for Danielle to be seated in a regular Jewish day school setting, with individualized assistance -- what is known as "inclusion."

The prevailing wisdom of the time among educators was that children with special needs (the Magadys abhor the term "special-needs children," believing that a child's identity should not be tied to a disabilities label) would do better in segregated settings. Beth Jawary, a special education expert who worked for 10 years with the Etta Israel Center, was also a skeptic. She tried to talk the Magadys out of their plan to put Danielle in a regular classroom.

"When I saw the research, I became an advocate."

"I really believed from my training that kids needed to work at their own pace with other kids of similar abilities, and that inclusion would not support their academic needs," recalled Jawary, now student success coordinator at Bais Yaakov School for Girls in Los Angeles and at Valley Torah High School. "Inclusion just wasn't talked about then, and people were very much afraid of having students with disabilities in the classroom.

"What changed my mind was working with the Etta Israel Center, which was moving in the direction of inclusion," she said. "When I saw the research, I became an advocate."

Thanks to the efforts of the Etta Israel Center, the openness of the administration at Ohr Eliyahu Academy and families such as the Magadys who jump-started the phenomenon of inclusion for the developmentally disabled, there has been a paradigm shift, with many day schools now offering inclusion at the elementary school level.

This year, there are five Bais Yaakov students and one boy at Valley Torah High School who remain pioneers of inclusion at the high school level. They have Down syndrome, cerebral palsy and other disabilities. Their success with inclusion in high school may well determine how integrated they eventually become in the Jewish community as adults.

Academic parity is not the goal. Each student has an aide who is also in class, taking notes along with the student, later reviewing the material with him or her, and offering other assistance, such as adapting worksheets for the student's level.

"Our premise is that a student can always be learning," Jawary explained. "The aide facilitates that learning so that the student can build on her knowledge and skills base."

But the social skills that are absorbed through inclusion are as important, if not more so, according to parents.

"Danielle doesn't pick up on social cues very easily, and she would never learn how to if she was in a closed society of other kids like her," observed Holly Magady.

Being a part of a regular classroom has helped Danielle hone her social skills, giving her and others like her a greater chance for fuller integration in society later on. Her achievements at school, both academically and socially, have led her parents to expect more of Danielle than they ever would have imagined when she was born.

Danielle, now in 10th grade, will be taking driver's education soon, and her parents are already exploring possible seminary options. They expect her to get a job that capitalizes on her special strengths, perhaps as a teacher's aide or dance instructor.

"I also think my daughter has as good a chance to marry as anyone else's daughter.",

"I also think my daughter has as good a chance to marry as anyone else's daughter," Holly Magady said, while acknowledging that Danielle will always require some additional assistance and supervision.

The Magadys are not the only parents who have seen remarkable advances in the skills of their children with developmental disabilities after they were placed in regular classes. Ten years ago, Raizel Rubin placed her son, Moishe (z'tzl), in a public pre-school. Despite her awareness of inclusion classes (Rubin is a marriage and family therapist who conducted research on autism and developmental disabilities for many years), she assumed that Moishe, who had Down syndrome, would benefit from the special education staff and classes offered in public school.

Yet Moishe, who had previously gone with Rubin to frum "Mommy and Me" classes, was unhappy there. "I want to play with Jewish children," he said. "I was practically in tears," recalled Rubin. "I called Rabbi Krause (menahel of Yeshiva Rav Isaacsohn) from the car and told him. The next week, Moishe was in pre-1 at the yeshiva."

With the help of an aide in the classroom, Moishe's language and social skills took off once he was in a regular classroom. "I saw dramatic changes," Rubin said.

While some kids invariably teased Moishe, they soon learned to accept him. One winter vacation, several boys from school saw him playing miniature golf and quickly ran over excitedly. "There's Moishe!," they shouted.

Tragically, Moishe passed away last December from cancer, although he remained an inclusion student at Yavneh Hebrew Academy until just a few months before his passing. His involvement with other kids at school and in the larger Jewish community led Moishe to feel "completely normal," his mother said.

He was given aliyahs and other opportunities for participation at Congregation Eitz Chaim of Hancock Park, led by his father, Rabbi Chaim Baruch Rubin.

"Moishe's relationships with his friends and people in the community were not one-sided." Raizel Rubin observed.

Full inclusion isn't for everyone. Students must have a relatively high degree of function, and they must get an early start, preferably by kindergarten. This is because most children with developmental disabilities have a harder time learning appropriate social behavior. Once these behaviors become too ingrained, inclusion is a tougher road.

Parents must also be willing to encourage independence in their disabled children, resisting the temptation to make everything a little easier for them. And parents must also find appropriate aides for their students who will patiently help but not hover, click with the child's personality and prove they can help the child learn. These are not easy tasks.

"This requires a tremendous amount of involvement, physically, emotionally and financially," Terry Magady explained. "If it's not done really well, with full support from the administration, parents and teachers, it could be a disaster."

Dr. Michael Held, who has spearheaded inclusion and special education programs for developmentally disabled Jews in Los Angeles through the Etta Israel Center, suggests that parents need to stay attuned to the feedback they get from aides, attend meetings and sometimes liaison with outside organizations.

Other girls learn that people can have a deficiency and still have something to offer just as much as anybody else.

Rabbi Yoel Burstyn, menahel of Bais Yaakov Los Angeles, added that cost should not be a consideration for students otherwise suited to inclusion. "If a parent cannot pay for the aide, it becomes our concern," he said. "It's our job to provide an education for every Jewish student." According to Rabbi Burstyn, when considering whether to offer inclusion in their school, the only thing an administration needs to ask itself is "if they have a heart, and a soft spot for these children."

"We Always Underestimated Them"

In the years since Bais Yaakov began offering full inclusion, Rabbi Burstyn has observed an enhanced sensitivity among all the girls to their disabled peers. "It's wonderful not only for what it does for the girls who need it, but also for the other girls. They learn that they don't have to be perfect, that people can have a deficiency and still have something to offer just as much as anybody else. It brings out compassion, tolerance and understanding. It's beautiful."

With the Bais Yaakov inclusion program only a few years old, Rabbi Burstyn said that they are learning as they go along. One thing he has learned for certain: "These people are a lot more capable than we give them credit for, socially and academically. We always underestimated them. Sometimes when we seek to do the impossible we manage to accomplish the incredible."

Perhaps the biggest gift for those with developmental disabilities who have thrived in school inclusion is an enhanced sense of self and self-esteem, which helps them feel a part of society's mainstream.

But what will society offer them when they finish high school, seminary or yeshiva? Held is working intently to create broad occupational and social options within the Jewish community for this first generation of people with developmental disabilities who have "graduated" from the Jewish special education and inclusion programs that only began to flourish as they were growing up.

"This is the next frontier, and we should all feel very excited," Held observed. "These are young people who will be ready for expanded opportunities. Many of their peers are ready for it, and it will enrich the community. What a child is like when he is born is HaKadosh Baruch Hu's choice. Deciding to respect that child in our community is ours."

Click here for a related article, "Count Us In".

9/11: Launching the War of Ideas
The 21st President of the United States: Failure or Inspiration?
Hiding Their Jewishness
The Jewish Pope: Following the Questions Home
Comments