Divine Intimacy: Ethics of the Fathers, 2:4 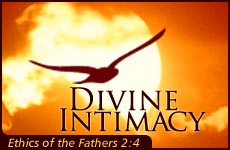 The ideal marriage as a paradigm for our relationship with God.

A constable once came across two suspicious looking men loitering in the shadows across the street from the city bank. Unable to elicit from them any account of their business, the officer brought them before the town judge.

"What were you doing outside the bank?" barked the judge at the first man.

"Nothing!" declared the man defiantly.

"And what about you?" asked the judge, turning to the other.

The second man pointed to his friend and declared, "I was helping him!"

In an age where our most popular cultural mantra may be just do it, this Mishna strikes a dissonant chord, seeming to suggest that we should have no will of our own, that we should abandon all personal aspiration and physical involvement in pursuit of spiritual nirvana.

By the same token, the Mishna seems to imply a purely selfish motive behind the quest of spiritual enlightenment, hinting toward devotion to the Divine Will only as a self-serving ploy to get on God's good side and reap the benefits of His favor.

Needless to say, Rabban Gamliel, the Torah leader of his generation, intended neither of these interpretations. And, as is so often the case, plumbing the depths of the Mishna's intent requires careful attention to the precise phraseology of its teaching.

Biblical Hebrew possesses three different words each translating roughly as will or desire. The first, ta'avah, relates to physical pleasure. The second, cheifetz, refers to wishing for or striving toward a goal. The third, ratzon, looks toward satisfaction through completion and fulfillment. It is this last term that Rabban Gamliel employs as he guides us toward a profound insight into the nature of the Divine Will.

In Talmudic literature, we find the curious remark that a person who dreams of a river, a kettle, or a bird, will enjoy peace in his marriage. Each of these images describes a different level of marital intimacy.* On the most basic level, a marriage is a partnership, an arrangement in which one party receives tangible benefits, whether physical, emotional, or financial, that make it worth his while to supply his spouse with tangible benefits valuable to her.

This type of relationship may be compared to a river, by way of which one city engages in commerce with another, each supplying what the other wants in order to acquire what it wants for itself. It is the lowest level of relationship, one based on ta'avah, personal gratification; indeed, if the parties involved never mature beyond this stage, the marriage is unlikely to last, for sooner or later one or the other will no longer consider the benefits to outweigh the costs.

At the next level, two people come to appreciate that they are complementary, with each bringing to the relationship strengths and qualities that make the two of them together much more than the sum of their parts. This kind of relationship, with the resulting bond of common purpose and appreciation, is compared to a kettle, which enables fire and water -- by nature incompatible -- to become partners. Through the medium of the kettle, fire and water join forces instead of consuming one another, producing something positive instead of destroying themselves.

In this second type of relationship, we find the wife using her strengths to compensate for her husband's weaknesses and vice versa. Their marriage becomes a true partnership where each feels needed by and dependent upon the other, not merely using the other for personal gain. They have grown into a relationship driven by cheifetz, the desire to attain a common goal through mutual commitment and combined effort.

The highest level of human intimacy occurs when each partner no longer sees himself or herself as one of a pair but as part of a single whole.

Many happy and successful marriages remain on this second level, but there is an even higher level, alluded to through the image of the bird. A bird possesses a dual nature: it is a creature both of the earth and of the sky. In order to function in the air, the bird's design sacrifices a measure of efficiency upon the ground; similarly, in order to operate upon the ground, it gives up a measure of efficiency in flight. Each capacity is in some way diminished to accommodate the other.

This is the highest level of human intimacy, where each partner no longer sees himself or herself as one of a pair but as part of a single whole, where neither individual feels any sense of sacrifice for the other because what is best for the other is what is best for the one. The great sage, Rabbi Aryeh Levin, reportedly said to his wife's physician, "Doctor, my wife's foot is hurting us." In Rabbi Levin's relationship with his wife, there was no you and no I, only the collective We.

At the birth of a Jewish child, friends and neighbors traditionally offer the benediction: May you raise this child to enter into Torah, marriage, and good deeds. Why do we mention marriage before good deeds? Can we not perform good deeds before we marry?

Now we can begin to understand the words of Rabban Gamliel. Do His will (ratzon) as if it were your own: Strive to cultivate a relationship with God as intimate as the ideal marriage. Don't perform God's commandments grudgingly or perfunctorily, as burdens and inconveniences that distract you from the fulfillment of your own desires. Rather, approach them with the same enthusiasm that you would have to fulfill the desire of your most truly Beloved. For indeed, God has given you His commandments not as chore or a millstone around your neck, but as a means of leading a more spiritually fulfilling life.

By cultivating a sense of pleasure in the observance of God's commandments, He will respond by doing your will as if it were His, bestowing upon you the blessing of your every desire and, far more important, the sense of closeness to Him compared with which the most intense physical pleasure is as fleeting as mist before the rising sun.

And what of the obstacles, the distractions, the more base desires that threaten to prevent us from achieving closeness with the Divine even once we have committed ourselves to its acquisition? Of these Rabban Gamliel says: Annul your will before His will, so that He may annul the will of others before your will. Choose for yourself the most important goal, seek to satisfy the most elevated level of desire, and God will respond by removing every obstacle from your path. If you make His will as if it were your own, He will ensure that you will succeed in all your efforts, and your success will bring you more pleasure than you can imagine.

*For an exhaustive discussion of this topic, see the book The River, the Kettle, and the Bird, by Rabbi Aharon Feldman.

Three Apps for the New Year

My Painful Path to Happiness
Were Adam and Eve Jewish?
How I Learned to Love the Multiverse
10 Big Jewish Inventions
Comments