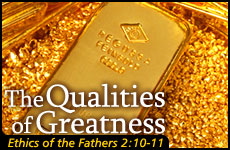 What are the critical qualities needed to attain greatness?

He used to enumerate their praises: Rabbi Eliezer ben Hyrkanos is a cemented cistern that never loses a drop; Rabbi Yehoshua ben Chananya -- fortunate is she who bore him; Rabbi Yossi HaKohein is pious; Rabbi Shimon ben Nesanel fears sin; and Rabbi Elazar ben Arach is as an ever strengthening spring. -- Ethics of the Fathers, 2:11

The first mishna above, 2:10, is possibly the most peculiar in all of Ethics of the Fathers. It teaches us no point of Jewish law, offers no ethical guidance, provides no insight into human nature or spiritual development. It merely enumerates the names of the five main disciples of Rabban Yochanon ben Zakkai.

Why should we require an entire mishna for nothing but a list of names?

In our discussion of the previous mishna, we described the political and spiritual crises that faced Rabban Yochanan: the Roman occupation, the Zealot rebellion, the destruction of Jerusalem and the Second Temple, the devastation and despair that overtook the Jewish nation. Only through brilliant diplomacy and ingenuity did Rabban Yochanan ben Zakkai guarantee the survival of the Jewish people and the preservation the Torah by securing the yeshiva of Yavneh and its scholars.

Our mishna underscores the transmission of Torah law, Torah tradition, and Torah ideals during this most precarious era in Jewish history. At a time when all might easily have been lost, Rabban Yochanan saved the future of the Jews and their Judaism, not only by providing for the continuation of the yeshiva, but by raising up disciples who would carry the tradition on to the next generation.

The transmission of Torah, however, is not enough to ensure the Torah's survival; just as essential is the people's confidence in the integrity of that transmission.

I will only be willing to commit myself to honor, protect, and observe if I believe that the Torah taught by the rabbis of my own generation is as authentic as the Torah handed over by the Almighty to Moses at Sinai. For this reason, the Torah itself warns us to neither add nor subtract a single letter of Moses' Torah: it is an eternal Torah, applying equally in every generation.

For this same reason does an entire mishna devote itself solely to the names of the students of Rabban Yochanan. In that most trying generation, Rabban Yochanan ensured the authenticity of Torah tradition through these five scholars. Not only did his students become custodians of the Torah -- they became the Torah itself, testifying through their great scholarship that the integrity of the tradition flowing from them was as unimpeachable as the tradition they received.

A cemented cistern that never loses a drop

Having identified the five scholars through whom Torah survived the destruction of Jerusalem, the next mishna goes on to describe the qualities that enabled these scholars to rise above their colleagues and attain preeminence. Rabbi Eliezer ben Hyrkanos is described as a cemented pit that never loses a drop. This does not mean, however, that Rabbi Eliezer merely possessed a perfect memory. Indeed, one scholar in the Talmud who had perfect recall is derided as being just "a bag of books." An unfailing memory may be a valuable tool, but it does not make a sage.

Rather, Rabbi Eliezer not only remembered every word he learned; he "acquired" every word of Torah he learned, understanding its meaning and significance, integrating it into his overall perspective of Torah, and internalizing it so that it became part of his nature. He never lost a drop because, like a sealed cistern, he prevented any aspect of Torah teaching to seep away from him through inattention or lack of application.

What was the secret of Rabbi Eliezer's remarkable ability? It was that he valued each word or Torah as one values a drop of water in the desert. Recognizing that his spiritual life depended upon the teachings he received from his master, he protected his Torah by making it inseparable from himself.

fortunate is she who bore him

What is a Jewish mother's hope for her son? That he should be a doctor? A lawyer? Marry a nice Jewish girl?

Perhaps, but the most fortunate mother is the one who lives to see that her son has gained the respect and admiration of others. In the fourth chapter of Ethics of the Fathers we learn that there are three crowns: the crown of kingship, the crown of priesthood, and the crown of Torah. But there is a fourth crown that exceeds all three: the crown of a good name. A person respected and admired for his character, his integrity, and his concern for the welfare of others -- this is the person who has attained the highest level of human nobility and therefore wears the most precious "crown."

Such was Rabbi Yehoshua ben Chananya. Yes, as a sage he wore the crown of Torah. But the degree to which he perfected his character earned him the most precious crown of a good name and, as such, our mishna finds no higher praise for him than fortunate is she who bore him.

In contemporary Jewish idiom, the person who acquires the highest level of righteousness -- the Jewish "saint," as it were -- is called a tzaddik, literally one who is righteous. In the language of Torah, however, an even higher level exists -- that of a chassid, a person of piety. Whereas a tzaddik scrupulously observes every aspect, every detail, and every nuance of the law, a chassid goes one step further: he conducts himself lifnim mishurat haDin -- beyond the letter of the law.

A tzaddik may cautiously drive within the 60 MPH speed limit, even as drivers fly past him on either side. A chassid, however, considering the road and weather conditions, as well as his own level of alertness, may decide it safer to drive only 55. A tzaddik may meticulously pay his bills and his debts in full and on time to honestly discharge his obligations. A chassid, however, will count his change to make certain that the shopkeeper has not made an error in his favor.

A person who achieves the level of a tzaddik certainly deserves our unqualified admiration. But we should never be satisfied with our own personal development until we reach the level of a chassid, not merely observing the letter of the law but striving always to discern, to understand, and to uphold the spirit of the law as well. Such was the quality through which Rabbi Yossi HaKohein acquired greatness.

The words of the Psalmist, "The beginning of wisdom is fear of God," begins the morning liturgy of the devout Jew. With this simple thought, King David offers a foundational insight how to direct every day toward spiritual development.

My wife takes sugar in her coffee. I take mine black. On occasion, if the cups have gotten mixed up while serving, I may sip from one cup, scowl briefly at the sickly-sweet flavor that has ruined this perfectly good cup of java, then reach for the other.

Imagine, on the other hand, that my wife preferred her coffee not with sugar but with cyanide (forgiving the obvious illogic of this analogy, of course). Were that the case, under no circumstances would I ever place a cup to my lips unless I were absolutely certain that the cup had been intended for me and not my wife.

Such was the attitude of Rabbi Shimon ben Nesanel in his fear of sin. As surely as poison will wreak destruction upon the physical body, so too will transgression of the divine will visit spiritual destruction upon the soul. Rabbi Shimon ben Nesanel reached a level of holiness such that his fear of committing the slightest sin far outweighed even the fear of ingesting mere poison.

an ever strengthening spring

The last of Rabban Yochanan's students, Rabbi Elazar ben Arach, possessed a quality distinct from the others. Whereas the first four disciples developed different styles of perfecting their divine service, Rabbi Elazar sought to go beyond even the most elevated level of Torah observance.

God's Torah, being as infinite as the Almighty Himself, is not intended to remain fixed or static in the finite physical world. It is a "tree of life," a living Torah that remains always vibrant, always relevant, always contemporary no matter how the values and the attitudes of secular society may change.

To accomplish this, the Almighty designed His Torah to achieve the seemingly impossible -- to remain immutable and unchanging even as it evolves and adapts to a changing world. By virtue of the written Torah, the essence of the law is constant, unalterable, and unvarying. By virtue of the oral Torah, the principles of the law can be applied to an ever-changing world.

Rabbi Elazar not only acquired Torah and lived Torah, he created Torah, as an ever-strengthening spring, producing new insights and applications from immutable principles, generating original interpretations based on an eternal and timeless foundation. His contribution to Torah society and Torah thought will be the subject of the next series of mishnas.

5 Steps to Letting Go of Anger

Six Ways to Conquer the Fear of Beginnings

8 Ways to Turn Darkness into Light

How to Stop Feeling Jealous

The Last Moments: Will You Consider This Year a Great Success or Failure?
The Blue Beyond
Great Place to Live
Is Eating Supposed To Be Spiritual?
Comments
MOST POPULAR IN Spirituality
Our privacy policy