Nothing is Random: Ethics of the Fathers, 4:3 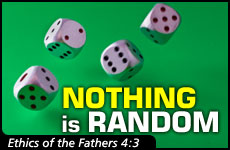 One doesn't often find civil rights heroine Rosa Parks and Norwegian anthropologist Thor Heyerdahl mentioned in the same breath. However, had Ben Azzai known of them, he might have made referenced both as examples of the principle he teaches in our mishna.

In 1947, Thor Heyerdahl set off from the western coast of South America in a primitive balsa raft and sailed 4,300 miles across the Pacific Ocean to Polynesia, thereby demonstrating how primitive travelers might have made such a journey long ago. 22 years later, Heyerdahl attempted to cross the Atlantic in a papyrus reed boat modeled after ancient Egyptian drawings. He successfully sailed from Morocco to Barbados on his second try. But it is his failed first attempt that has relevance to our mishna.

Heyerdahl's papyrus boat was banana-shaped, long and narrow with a tail the curled up and pointed back toward the prow. A taut line connected the tip of the tail with the central part of the boat.

The natives who helped construct the boat convinced Heyerdahl to remove the line, which had been attached according to the ancient sketches but which appeared to serve no purpose. Heyerdahl set sail in his papyrus craft, which began taking on water mid-journey and ultimately sank.

One strand of cord, apparently without purpose, made all the difference between a seaworthy vessel and a sunken ship.

Although the little boat kept its shape before it set sail, once in the water the papyrus reeds began to soften and the heavy tail section began to sag. The line that ran from the back of the boat to its center, although seemingly without purpose, was in fact essential to the seaworthiness of the craft. By keeping tension on the back of the boat, the line prevented the sagging that doomed Heyerdahl's first attempt. He replaced the line for his second try and successfully crossed the Atlantic.

One strand of cord, apparently without purpose, made all the difference between a seaworthy vessel and a sunken ship, between success and failure, and perhaps, for some ancient traveler, between life and death.

AT THE CROSSROADS OF HISTORY

Although anthropologists still debate whether Thor Heyerdahl's voyages produced any significant contribution to his field, no one debates the cultural contribution of Rosa Parks. On December 1, 1955, the 42-year-old department store worker found no empty seats in the "colored section" at the back of a city bus and took a seat farther forward. When the bus driver ordered her to give up her seat, Ms. Parks refused.

This was not the first such act of civil disobedience in response to southern segregation. But after the murders of George Lee, Lamar Smith, and Emmett Till earlier that year, the black community of Montgomery, Alabama, was ready to catch fire, and the arrest of Rosa Parks was the spark necessary to ignite them into action. The Montgomery Bus Boycott became the catalyst giving rise to the modern civil rights movement, bringing an end to segregation and gradually changing racism from an accepted and acceptable attitude to social anathema.

The Hero Within
Don’t Believe in Other Gods Versus God is One
Seeing Without Eyes
Why Shouldn’t We Eat Whatever We Want?
Comments
MOST POPULAR IN Spirituality
Our privacy policy
Aish.com Is Looking for Great Writers