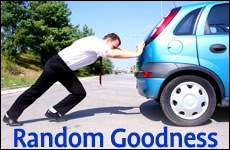 The quickest route to being a good guy.

Quainthood often comes at a price. Driving over that road during the summer kicks up dust and rocks, and whenever it rains heavily, the road develops instant potholes large enough to house a family of four. I recently hit a pothole on one such morning, incurring a bulge in my tire that told me it was a ticking time bomb. I called up the dealership and told them I was coming in to get the tire changed. Murphy's Law dictated that it wouldn't be so simple. About a mile away from the dealership, my tire blew up.

Getting out of my car to change the tire, I was slammed with a blast of 20-degree air and frigid winds. I only had the tools that come free with the car, but like communist equality, they only work in theory. After 15 minutes of slow-going work, I was in pain. Expecting a leisurely drive to the dealership, I had not dressed for a face off with the elements. My entire body was freezing, but my hands were taking the worst hit because they were holding the metal tools that refused to warm up even the slightest.

Suddenly I heard someone honking at me. Turning around, I saw a middle-aged, African American woman driving an SUV. She was waving something at me and called to me. "Do you want these gloves?"

I felt bad taking her gloves so I gave her the typical "Thanks, but I'm fine" motion.

She wouldn't take an easy no. "These are my son's, and they don't fit him anymore. I saw you here so I went right back home and got them. Please take them!"

Here I was, a total stranger, and not only did she notice that I must be freezing, but she actually did something about it.

That was convincing. I came to the car, showering her with thanks and gratitude, took the gloves, and continued thanking her all the way till she was out of sight. Not only did the gloves warm my hands for the next ten minutes until I got the spare on the car, the warmth of her action warmed me for the next week!

I was so struck by what this woman did. Here I was, a total stranger, and not only did she notice that I must be freezing, but she actually did something about it. Dozens of cars passed without anyone stopping to offer me a helping hand, but this person had the sensitivity to both notice the exact point at which I must be suffering the most, and the proper way to fix it. She could have just stopped and offered to get me gloves, and I surely would have refused, and she would have gone on her way with the knowledge that she tried to help. But she had the foresight to recognize that I would have said no, and went one step further in going home without asking, and then presenting the gloves to me in a way I couldn't refuse.

This woman was an expert in performing RAKs, Random Acts of Kindness. These are some of the best forms of kindness because they are unexpected and often come when people need them the most.

People who perform RAKs are because they notice needs when many others don't. With their special sensitivity, they're constantly on the lookout for kindness opportunities.

They're the people who come over on a random morning to just listen to a friend who is going through a tough divorce, and bring with them a thermos of hot chocolate and a plate of cookies. They're the people who offer to take a neighbor's children out for the afternoon two months after they had a baby, when all the extra help is long gone, and the enormity of coping with another child sets in. They're the ones who make sure to give a lot of extra attention to one of their children's friends, the one they know isn't getting any attention at home.

Who doesn't love a person who always has something nice to say to everybody?

There's a shortcut that can catapult us all into the coveted cadre of RAKers. We can do a Random Act of Kindness to almost anyone at any time by simply complimenting them or their family members. According to one recent study, we live in a world where there are 20 negative statements made for each positive one. Compliments are the water that make drooping plants freshen, that make jaded hearts sparkle. When we meet someone shopping, at the synagogue, PTA, or anywhere, we can always think of something nice to say to them.

"Your daughter babysat our children last week, and boy, she just has such a cheerful way about her! The kids loved it!"

"I saw the baby outfit you gave Rachel, it was stunning!"

"Your husband is so active in the community, he really is someone special!"

Who doesn't love a person who always has something nice to say to everybody? You're like the ice cream truck -- people are excited to see you! But I discovered that dishing out genuine compliments to people puts has an added benefit, it puts me in a good mood. After telling a parent how kind or generous their child was, and seeing how much they appreciate that information, seeing it visibly lighten their face, one can't help but feel a sense of joy themselves.

We live in a world where sometimes the darkness seems everywhere. The whole world is still reeling from the tragedy in Mumbai, where hundreds senselessly lost their lives. Among them were Rabbi Gavriel and Rivkah Holtzberg, a couple who dedicated their entire lives to doing kindness to random strangers in a foreign land. The families of the Holtzbergs have requested that people perform RAKs in memory of their loved ones, to counteract the Random Acts of Evil that brought about the demise of those holy souls. When the world seems to darken, we need to do everything we can to brighten it back up. Now, more than ever, we need RAKs.

Compliments are a good stepping off point to launch ourselves into the world of Random Acts of Kindness. It's cheaper than a pair of old gloves, it's everywhere, and it really makes a difference.

Individuality, Conformity and Being Jewish

One Choice Can Alter Your Destiny

In the Waiting Room

There is a Pharaoh and Moses Inside Each of Us
Don’t Believe in Other Gods Versus God is One
Seeing Without Eyes
Why Shouldn’t We Eat Whatever We Want?
Comments
MOST POPULAR IN Spirituality
Our privacy policy
Aish.com Is Looking for Great Writers