Growth or Death: Ethics of the Fathers 1:13 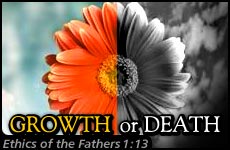 He not busy bein' born is busy dyin'.

The scorpion on the shore approached the frog in the water. "Frog, let me ride on your back so I may cross over to the other side of the pond."

"How dumb do you think I am?" asked the frog. "If I let you on my back you're going to sting me with your poison stinger."

"Fool," replied the scorpion. "If I sting you while on your back I'll also drown. So let me ride."

After thinking it over the frog was satisfied with the scorpion's reasoning and allowed him to jump on his back. Halfway across the pond, the scorpion raised his stinger and stung the frog. Immediately, they both began to drown. As they were going under, the frog yelled at the scorpion, "Idiot! Why did you do that? Now we're both going to die!"

"What can I say?" replied the scorpion. "I'm a scorpion. And scorpions sting. I can't change for a frog."

Sometimes we won't change to save our life.

The underlying theme of the disparate teachings in this Mishnah is that change and growth is the essence of life; stagnation is death. In the words of Bob Dylan, "He not a-busy bein' born is a-busy dyin'."

Life is like a descending escalator. If you don't strive upward, you'll eventually find yourself at the bottom.

Dylan's line is actually a rephrasing of the clause in Hillel's aphorism above: "He who does not increase, decreases." Indeed, the Aramaic word for "decrease" here can be translated "wither" or "die." Hillel's saying, then, translates: "He who does not grow, dies."

The kernel of this idea is ensconced in one of the most famous verses in the Torah: "I put before you life and death -- choose life!" The verse doesn't exhort: "Do not choose death" because death is not a choice. It's the natural outcome of stagnation, of time not acted upon. If you do not choose life -- if you merely stay put -- then you have chosen death.

Life is like a descending escalator. If you stand still, you descend. If you don't strive upward, you'll eventually find yourself at the bottom.

Stagnation is not merely lack of growth; it is degeneration. There's a magnetic force -- a metaphysical gravity -- continually pulling us down. Like a shark that must continually swim to have water pass over its gills so it won't drown, a human being can never stop growing.

Once we realize the hard truth that not only will nothing happen until we get off our proverbial bottoms, but that the walls will eventually cave in if we just stay comfortably numb where we are, then we'll be motivated to take action. And that's the goal: taking action. Once that first action is taken we set in motion mechanisms which can lead to greater and greater action -- to the point of even superhuman action that reaches the heavens, if we choose to take it far enough.

TYING IT ALL TOGETHER

How do the other three phrases of the Mishna tie into the core idea of "growth or death"?

The first part of the Mishna states, "He who pursues a name will lose his name." Fame is an empty goal; it's nothing unto itself. The person who gears his every thought and action toward the pursuit of fame cannot grow. Growth is an internal quantity; fame is external, a shell. The person whose entire focus is the external shell is not alive and growing on the inside.

Rashi translates the verb as "teach" instead of "learn," rendering: "He who doesn't teach will die." One of the sages in the Talmud said: "I learned much from my teachers, more from my peers but most from my students." Teaching is the ultimate growth vehicle. It helps a person grow and go beyond his isolated ego. He expands his knowledge from the give and take with students. There's no growth like learning, and there's no learning like teaching.

The Mishna's fourth phrase says, "He who makes worldly use of the crown shall perish." "Crown" represents the ultimate achievement -- a person gets an M.D., a Ph.D., rabbinic ordination, etc. People who achieve much in society are in some ways in more danger of stagnating. If they become prideful of their status and/or use it for material advantage, rather than continuing the process of learning and growth that got them where they are, they will perish in the end.

The word for "perish" used in our Mishna can also mean, "exchange." The implication is that the spiritual death and stagnation implied here is not so obvious. It's slow and incremental. Over time, the person who was intellectually or spiritually advanced finds himself dying on the inside, gradually "exchanging" a rich, inner, spiritual growth-oriented life for a shallow, external, material stagnant existence. That's the natural consequence of using the "crown" for worldly gain.

There is a logical progression to these four parts. It's natural to want fame. However, the person who starts with fame as his one and only goal undermines his ability to grow. Even if he gets a hundred PhD's from the most prestigious schools, chances are he hasn't learned a thing. His knowledge is something external to impress others; not anything that will help him and others grow. That's why the caution against pursuit of fame is before anything else. Sometimes it's better to do things for no particular reason than for a negative reason.

The next step is to be aware of the core idea promoted here: grow or die. Move forward or go backward. Learn or lose what you already know.

A person who has succeeded down a path and gained real knowledge ultimately has to teach it to others.

Next, a person who has succeeded down a path and gained real knowledge ultimately has to teach it to others. Otherwise, he dies. His knowledge has no purpose, no vessel of expansion and expression, if he doesn't find others to teach it to.

Finally, one who becomes a recognized teacher must realize the danger inherent wearing the "crown of knowledge" he's earned for his accomplishments: If he uses it for worldly gain he will perish, slowly "exchanging" the good for the bad, life for death.

THE BUSINESS OF DYIN'

Life will present obstacles to something that is rightfully yours: your destiny. And those obstacles will lead to setbacks. They will produce failures and loss of confidence. However, they're not meant to deter you from your destiny. They're meant to make your destiny a true possession, a possession earned through your integrity to your goals.

A person who is dying doesn't usually want to think about it. The same is true with a person dying spiritually. He busies himself from dawn to dusk with all types of busy-work -- anything but the business of his achieving his spiritual destiny. He may even busy himself with idealistic philosophies and good causes -- everything but the good cause of his own personal development.

Real growth takes real effort and can be painfully slow. The only solution is to fill daily life with activities of perpetual growth as much as possible. Joggers talk about the high of exercise. After a while, they can't imagine going through a day without running a couple of miles.

Spiritual growth works the same way. Once a person gets the taste of it, the effort itself becomes pleasurable. Therefore, busy yourself with the labor of living, not the busy-work of dying. He not a-busy bein' born is-a busy dyin'.

How to Build Self-Confidence

The Strange Face of Change
The Grand Mufti of Jerusalem and the Holocaust
The Connection between Israel and the Jewish People
Grit and Torah
Why We Can’t See True Reality
Jewish Chutzpah’s Ancient Precedent: Commoner Sues Toxic Boss 2600 Years Ago
Grilled Israeli Lamb and Veggie Kabobs Recipe
How To Barbecue Like an Israeli
Pain is a Reality; Suffering is a Choice
The Promise Of The Land
1 2 3 … 2,980 Next »