A Prayer for Freedom: Ethics of the Fathers 3:2 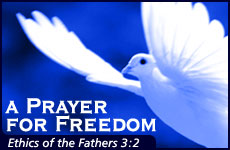 Why pray for a non-Jewish government?

"Freedom's just another word for nothing left to lose."

So sang Janis Joplin, before her free, 60's era lifestyle ended in a heroin overdose at the age of 27.

But with an uncharacteristic flash of genuine insight, this hippie icon foreshadowed the inevitable demise of her own movement by observing that "absolute freedom" can be achieved only by severing every connection to every responsibility and, thereby, leaving oneself cut off from everything of value. And just as the moral anarchy of the hippies led not to nirvana but rather to nihilism, so too must political anarchy lead to social chaos and devastation.

For the Jew in exile, however, perhaps anarchy is the lesser of many evils. The Crusades, the Inquisition, pogroms, expulsions, Nazism and Communism all seem to testify that non-Jewish governments are often the Jews' worst enemy. Are we not far better off with the non-Jews fighting among themselves to distract them from making us the focus of their attention and aggression?

A closer look at history, however, reveals a more nuanced perspective. The Crusades resulted from the manipulations of Pope Urban II to preoccupy the rival kings of Europe who, he feared, would otherwise unite against him. The Inquisition grew out of political instability in the aftermath of the Great Schism that violently divided Catholic Europe. The Chmielnicki massacres derived from a vengeful Cossack uprising against a weak and complacent Polish monarchy. The Nazis came to power by exploiting a public frustrated by a broken and bankrupt German economy, and Soviet Communism grew out of public discontent with a broken and corrupt Czarist regime. In case after case, political instability spawned the political tyranny that led to Jewish suffering.

As attractive as the notion might seem, the freedom of absolute anarchy is really no freedom at all. For who would choose to live in a society where every citizen is free to drive on either side of the road, free to occupy any piece of property regardless of prior ownership, free to take for himself any possession whose owner is too small or too weak to defend it, free to take the life of any person who stands in his way?

Thus Rabbi Chanina warns us to pray for the welfare of the non-Jewish government, for even a dictatorial government will most probably defend its own existence by imposing some measure of stability and, consequently, security throughout its borders. Indeed, whereas the Jews of Babylon prospered for centuries under the Parthian empire and, after its fall, under the Moslem empire, the chaos of the dark ages in Europe created a breakdown of social order so absolute that "man swallowed his fellow alive."

Amidst our suffering at the hands of oppressive peoples, it is easy to lose sight of the universality of our purpose.

Rabbi Chanina's admonition contains a deeper lesson as well. The mission of the Jewish people is to be an ohr laGoyim, a light of spiritual and moral wisdom for the nations of the earth. Nevertheless, amidst our suffering at the hands of oppressive peoples, we can easily lose sight of the universality of our purpose until we become focused only on what serves our own self-interest. Civil wars, human rights violations, natural disasters and unnatural catastrophes may strike us as tragic but largely irrelevant to our own lives and our own difficulties.

Rabbi Chanina teaches that we dare not allow ourselves to indulge in such isolationism. For although it is clearly our first responsibility to invest our time and energy and money toward addressing the problems of the Jewish community, it is also the way of the righteous to empathize with the pain and suffering of all peoples, Jews and gentiles alike. True, the laws of charity clearly demand that we invest our resources first and foremost to come to the aid of our fellow Jews. But Rabbi Chanina calls upon us to recognize the supernatural power of prayer, to respond with prayer to the plight of all our fellow human beings in times of crisis, and also to pray for the stability of human society in hope of preventing human suffering.

Though his teaching, Rabbi Chanina illustrates poignantly that, in contrast to history's testimony of man's inhumanity to man, the Jew directs not only his material resources but also the very real power of his prayer toward the welfare of every person with whom he shares his place in God's world.

The Meaning of the Menorah's Light

Losing the Love of Your Life: My Dialogue with Rabbi Ahron Hoch

The Expression of the Soul: Ethics of the Fathers, 3:14
The Blue Beyond
Great Place to Live
Is Eating Supposed To Be Spiritual?
Comments
MOST POPULAR IN Spirituality
Our privacy policy