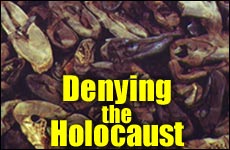 As a child, I was obsessed with the Holocaust and swore I would tell the story. Then I became a mother and everything changed.

As a child, I was obsessed with the Holocaust. I consumed all the books available on the subject -- a handful compared with the vast literature that exists today --
and discussed it endlessly with my classmates at Bais Yaakov of Boro Park. For us,
the taboo topic that both tantalized and repelled with its mystery wasn't boys, but "de hurban" -- the destruction.

Before the morning bell, over lunch, after school, we'd chew over the same words:
How could it have happened? How did our parents live through it? And, most
important: How could the world have been so silent? The answers eluded us, but we
continued to torment ourselves, as if in expiation for our very existence. We were
branded, as surely as our parents were, by the numbers tattooed on their forearms.

"Never Again!" we swore, and indeed, later, some of us would join the Jewish
Defense League. Others would take upon themselves the burden of witness: I will
dedicate my life to recounting the horrors; this testimony will serve as armor; I
will protect my people with the story. Others vowed: "I will defeat Hitler by
embracing God and Judaism and make my life a testament to those who perished."

Perhaps I was more traumatized than other children my age -- not by my losses, but
by the screams in the night.

I made not one but all three of those vows. Perhaps I was more traumatized than
other children my age -- not by my losses (two grandparents, two uncles and
countless hundreds of relatives, which wasn't unusual among families I knew), but
by the screams in the night.

Every night, for years, my father would scream in his sleep: choking, inhuman
wails. By day, he never spoke about the Holocaust. But I was woken by his cries,
and huddled in a corner outside his bedroom, willing myself to hear and absorb
each shriek. It was my duty, I thought, to allow them to engulf me, to tattoo my
psyche.

I became an activist. At 16, I joined the Student Struggle for Soviet Jewry ("Let
My People Go!") and at 19, the JDL. I was arrested for sitting down in front of
the Soviet mission to the U.N., and was proud to have a record. For my people, I
would sacrifice.

But more than anything else, I swore, I would tell the story. I wrote essays,
poems, songs, plays -- with one theme. As a high school teacher in a yeshivah day
school, I asked the principal if I could substitute Elie Wiesel for Charles
Dickens. Later, I taught a course in the literature of the Holocaust at Baruch
College to West Indians, Hispanics, Chinese-Americans and African-Americans. Many
confided at the end of the term that I'd changed their perspective on Jews.

And I waited expectantly for the greatest challenge of all -- imbuing my own
children with consciousness of the Holocaust. I wouldn't be like my father -- no
screams in the night to sear their spirit. I'd begin educating them at a young
age, read them books on the subject, talk to them openly, take them to the
Holocaust centers that had recently opened. I would be the perfect teacher.

And then my children came and everything turned around.

The first was born high-strung, sensitive and nervous. It became a challenge to
allay his many fears, and parenting proved far more formidable than I'd ever
envisioned. How, I wondered, could I inflict the burden of the Holocaust on such a
child? He was wrestling with so many inner demons; I couldn't add to his catalogue
of terrors. Here I was working to assure him -- with the help of many practitioners
I had enlisted -- that the world was a safe place, and then I'd tell him what had
happened to three-quarters of his family? And so, I never shared with him the
history, the heritage, I had so fiercely vowed to impart.

At birth, the younger one seemed different. A hardier constitution, I can tell
already, I breathed with relief in the delivery room. More robust, cheerful,
optimistic -- it was evident from the beginning. So maybe I can tell him, I thought
as I watched him grow into a sturdy, happy child. But when I looked from one child
to the other, I paused.

I was silent, as silent as the mounds of eyeglasses, the piles of shoes, the heaps of empty suitcases that still stand in quiet rebuke in Auschwitz today.

The older one has such a pessimistic perspective. How blessed is the younger one,
with his vibrant personality outlook... Do I dare darken his universe? What if the
Holocaust education I give him diminishes his spirit, even a fraction? I cherish
his warmth, his belief in people, his conviction that the world really is a safe
place. How can I tell him that it's not - especially not for Jews?

And so, irony of ironies -- I never told either. I, the voracious Holocaust reader,
the impassioned Holocaust teacher, the obsessed Holocaust writer, never shared a
single word about the Holocaust with my children. I was silent, as silent as the
mounds of eyeglasses, the piles of shoes, the heaps of empty suitcases that still
stand in quiet rebuke in Auschwitz today. I was more silent than the damned
bystanders, the reprehensible spectators, the mute witnesses. The martyrs and the
victims and the heroes of the Holocaust were, in my home, unknown and unsung.

Was I wrong? Was I right? On Holocaust Remembrance Day -- I remember wrenchingly
the pledge I made never to forget, the pledge I could not keep. I think with
anguish of the 6 million skeletons, and then quietly I put them, one by one, back
into the closet.

Denying the Holocaust is from "The Mother in Our Lives," (Targum/Feldheim) a new anthology of Jewish women's writing edited by Sarah Shapiro.

Gittel Abrams is the penname of a writer living in Brooklyn

Who are the Jewish Athletes at the Tokyo Olympics?
Don’t Believe in Other Gods Versus God is One
Seeing Without Eyes
Why Shouldn’t We Eat Whatever We Want?
Comments
MOST POPULAR IN Israel
Our privacy policy
Aish.com Is Looking for Great Writers