The Day My Brother Died 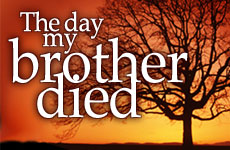 Ten years after her brother was killed in an auto accident, a young woman reflects back on what she learned.

It happened in South Africa. Haley's Comet was in the sky, and our whole family (five of us) plus an aunt and two cousins went camping to a park in the north to get the best view. We were all in a mini van.

The holiday was glorious, and my brother, who was 11, said to my mom at the end, "I've had such a good time. I've never been so happy."

On the way home, we were traveling across soft sand dunes, singing, having a wonderful time. My mom was driving. Eventually I fell asleep.

Suddenly the van started swerving, a tire blew, and my mom lost control. The van flipped over and rolled. There were no seat belts in the van, so we all tumbled over one another.

Someone said, "Is everyone okay?" And we began to step out.

I was the first to see my brother. The van had impacted his head. He had died immediately. My mother became hysterical.

We didn't know what to do. We were in the middle of nowhere. My dad suggested we try and lift the van, but it was a fruitless suggestion. I was so disturbed. Was he really dead?

From somewhere came another van, and we all got in. Someone stayed behind to stay with my brother. The hardest thing was getting in the van and leaving him. We were silent. I knew he was dead. I felt sick, cold, disbelief. My mom had to be sedated. None of the rest of us were hurt except for my cousin, who broke his collarbone.

I began to have flashbacks and horrible feelings of guilt. When my brother was alive, I used to hang out with the girl cousins and shut him out. We thought we were so cool. We just tolerated him. Any time I was mean or bossy to him came back.

Friends flew us back home in their airplane. There was an icy feeling as we entered the house. Everything felt cold. The shiva was a blur. I remember covering the mirrors, lots of people, lots of food. I was in a cold daze for a day or so -- weird, detached.

After two days, friends of my parents took us for two hours to their home to play with their kids. I didn't like their kids, and I didn't want to be there. When I got home, I hid in my mom's room. She found me crying hysterically.

We all slept in the same room for nights. I remember waking up to my mom crying. It was hard seeing my parents completely upset. It was an intangible feeling -- my pillars were no longer there. They were suffering, and who could take care of them?

My parents were completely upset; my pillars were no longer there.

The shiva process is good because it forces you to be personally involved. The family is involved in the reality, and the support is there. It makes you confront it all -- you're sitting, not distracted. That's why you're there. I see the value in it now, but at the time it was hard.

I remember someone saying at the shiva, "You must be strong for your mom." Yes, I must be, but I'm not feeling strong for myself.

I felt sorry for my dad. People kept telling him to be a man and be strong for his wife.

- "Check your mezuzot"
- "At least you have two other kids."

People kept telling my mom to eat. Leave her alone! I learned that when you’re around mourners, if you don't know what to say, say nothing. But I can empathize. You would think that I would know better what to say now, but I don't.

PAIN IN THEIR EYES

I was angry with God. I didn't doubt my belief or question my Jewishness, but I just couldn't understand why something so horrible could happen.

My parents joined a bereavement group, which really helped them. They had groups for siblings, but I said, "No!"

The hardest part was not being able to talk to my parents. There was so much pain in their eyes. If they would bring him up, I would cringe because even though I wanted to keep his memory alive, I wanted my connection to be private. As I get older, I can talk about it to my parents more.

The most meaningful thing was when friends would say: I miss him, too.

Afterward, some of my parent's friends pretended he never existed, and that was wrong. The most meaningful thing to my mom was when friends would say, "I miss him, too."

He was a bright and wonderful person, intelligent, with special energy -- the most like my mom. It is beyond belief what she had to go through. After all, she was driving when it happened. There were times she didn't want to get out of bed, but she had a family who needed her.

At the unveiling of the tombstone, I felt very connected to him. Actually I felt that way right after he died. I would talk to him, sense his presence. There were many times later that I felt he was watching over me. I feel looked after, protected. Things have fallen into place in my life so smoothly that it's not even logical.

At different times I've had different understandings of what is spiritual. I believe sometimes that souls can connect.

Because he is buried in South Africa, I don't get to visit his grave often. But I remember going there after a few years and thinking of the sense of lost potential. "He'd be 22 now," I thought, even though I knew he wasn't meant to live beyond 11. But it feels like a loss. Reality is weird. Time and defense mechanisms can blur and protect, but when you're standing at a grave, it's very, very real.

I have a strong sense that there is a greater plan, that it couldn't have been prevented. But why him? Why someone with such potential to the world and to those around him? It's hard to fathom. You just don't know -- can't understand.

The whole experience changed my life. I know I'm a completely different person than I would otherwise have been. I don't focus on trivial things. My teenage years were more serious, and I have chosen to work as an occupational therapist with people who are dying. I think it's because losing my brother made dying less scary. It's hard to explain. I'm also a better sister to my other brother.

I think because I had to think about death so young that I am less scared of dying. People don't face it until they're older. It became so real to me so young that it's part of the cycle. It's normal to die.

I had to attend a funeral of a patient I had gotten close to. It was not a Jewish funeral, so there was an open casket. I looked at her body, and it wasn't her. She looked empty -- like a vessel. Her spirit was who she was. The separation of body and soul are so strong.

It made me understand why we don't bring flowers to a gravesite. We don't try and beautify it because we are not visiting the person. We leave a stone to say we were there. It's a beautiful thing. When I'm actually doing that I feel connected to the soul.

I always believed in life after death and another world. I didn't know what Judaism believed. I knew very little about my own religion. Most Jews seem the same way. We know about every "ism" except Judaism.

On the Jewish holidays at the Yizkor service, I feel really good. It's a special time. I like taking time to fully concentrate. Even in my youth when I was anti?Judaism, it still felt right to do it.

I feel farthest away from him when I'm living my life superficially.

I feel close to him at different times. My brother looks a lot like him, so I sense that part of the brother I lost lives on in the brother I have. I also feel close when I light a Yartzeit memorial candle. And when things are hard or I'm confused, I feel his presence. I get that "guardian angel" feeling.

I feel farthest away from him when I'm living my life superficially, coasting, getting caught up in things that aren't meaningful.

My brother loved cricket and had memorized statistics and scores of hundreds of games, even though he didn't play himself. So my parents established an award that is given at his school for kids who aren't necessarily athletic but make an effort.

I remember the feeling of terror that my other brother wouldn't reach the age of Bar Mitzvah. He did, but the celebration was bittersweet. It was hard for my mom. But we didn't ignore our loss and spoke about him throughout the day.

When people ask how many siblings I have, I always say, "One." After all, at what point in a relationship or friendship do you bring it up? Anybody who is close to me knows. It's a big part of who I am, and people have been so good about it.

Excerpted from "Remember My Soul," by Lori Palatnik, Leviathan Press
Like What You Read?  Give Jews around the world the chance to experience engaging Jewish wisdom with more articles and videos on Aish. It would make your mother so proud and as a nonprofit organization it's your support that keeps us going. Thanks a ton!

The Possible Dream
Where Are We? The Body, Brain, Soul Problem
Dr. Sheila Nazarian’s Escape from Iran
The Miami Boys Choir is Taking over TikTok
Comments
MOST POPULAR IN Spirituality
Our privacy policy
Aish.com Is Looking for Great Writers