When My Son Clinically Died 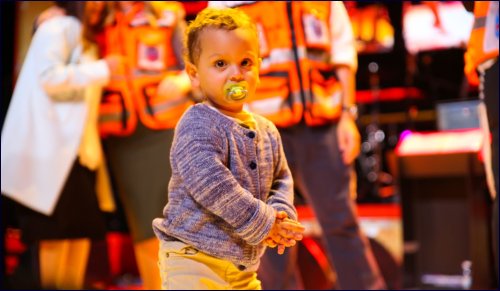 He had fallen into a pond and was found blue and lifeless. Then the miracles started to happen.

Sitting in the huge sukkah with our neighbors, enjoying our festive Yom Tov meal as my almost two-year-old son Elchonon played in the large garden with other children, little did we know that my wife and I were about to experience the greatest nightmare of our lives, and our greatest miracle.

In the middle of the meal a man’s scream suddenly pierced the air. “Help! Help! Help!!” I scrambled to find the source of the commotion and saw my neighbor holding my soaking wet son who was blue and lifeless. He had fallen into a small koi-pond near the garden and drowned. I grabbed him and assisted one of the other guests in administering CPR. Within two minutes, United Hatzalah first-responders arrived, trying to revive Elchonon who wasn’t breathing and had no pulse.

Within two minutes, United Hatzalah first-responders arrived, trying to revive Elchonon who wasn’t breathing and had no pulse.

We were able to get some of the water out of his lungs before being whisked away in the ambulance where the professionals provided much needed oxygen. With all the tools at their disposal they frantically tried to resuscitate him and get him breathing. He was not responding.

There was deafening silence in the back of the ambulance. Then came the sweetest sound I have ever heard:  a screeching, shrieking toddler. We sighed with relief.

In a dizzying whir we arrived at the hospital where my beloved Elchonon was eventually stabilized in critical condition. He began to breathe on his own but he required oxygen and was not responsive. He had experienced hypothermia and his hands were locked into a spasm resembling someone with severe retardation, a possible indication of nerve damage or brain damage. The doctors told me that it may take a month before he begins to respond.

Somehow I remained calm and drew strength from some unknown source. I would not (and could not) believe the dim prospects offered by some of the doctors. 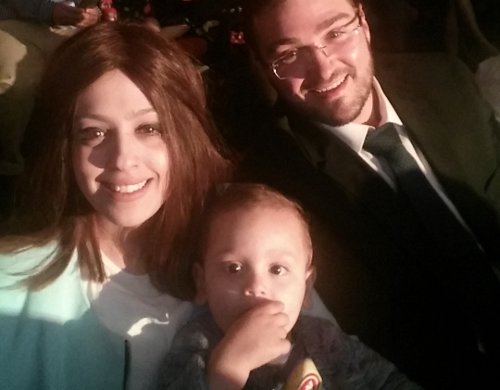 My wife and I with our son

Once we were transferred from the emergency room into the ICU my wife asked me, teary-eyed, “Yoshi, what is going to be?”

“He is going to be 100 percent fine.” I refused to let go of hope despite the horrific circumstances. The visitors began pouring in with the cookies, cakes, toys, positivity and love.  We were informed that the shuls in our neighborhood had called for a special gathering of the community to recite the Book of Psalms. They, too, did not give up hope.

Our hospital room was kept to arctic levels to keep Elchonon’s body temperature down to prevent further brain damage. My wife and I alternated sitting in a chair and holding our son in our arms for hours on end. I spoke to God in that chair from the deepest places in my heart. I whispered to my son, “Fight little guy, fight!” and I thought I saw a little nod. I kept telling him that when he gets better he’ll go play with his friend Dovie and Mordechai, and I would give him cookies and candies and cola, all the treats he wanted. I told him that there was so much I wanted to show him and teach him. I told him we loved him and that Grandma just bought him a new toy.

He began to move his eyes a bit. The doctor came in and told us that the oxygen levels in in blood had dramatically improved and she saw how Elchonon’s pupils were responding but it was too early to say anything for sure.

I asked Elchonon if he wanted his pacifier and he grasped at it with his clenched hands, unable to grab hold of it. But at least he began to respond.

By midnight I told my wife to go home for the night because she needed her strength and we were told we would need to be there for weeks. She insisted that I go.

Around 2:00 AM she called to tell me that Elchonon tried to get up on all fours as if to crawl. We cried, and I went fitfully to sleep in an empty house, the future uncertain.

I was shocked when I returned the next morning. Elchonon’s hands had eased into their natural position and he was looking around! My wife told me that he tried to say “Mama” and seemed to want to walk. He was even interacting with some of the other children on the floor but she was too nervous to let him go.

She went home to get some much needed rest after a sleepless night. The doctors gave me permission to take Elchonon in his stroller to the hospital sukkah. Off we went and Elchonon was actually trying to climb out! I was astounded by his terrible-two energy and let him slowly come out of his stroller, holding him as he stood on his own two feet.

Then he suddenly took off running!

He went straight for the toys in the children’s ward and started playing with puzzles with the other children. I had to pick my jaw up from the floor. Not wanting to push too much I buckled him into the stroller and headed for the sukkah with a book, thinking he would nap and I would get to learn a little bit. He insisted on walking into the sukkah himself.

The doctors were shocked by all of his amazing activity but I needed to hear my son talk.

I didn't imagine I would be chasing him around so soon, but I was terribly concerned that he wasn’t yet talking. The nurses and doctors were shocked by all of his amazing activity but I needed to hear my son say something – Mommy, Daddy, bottle, paci – anything.

In the sukkah I tucked him back into the stroller and tons of visitors started arriving with more cookies, teddy bears and toys. I told them about Elchonon’s amazing progress and my desperate need to hear him speak. Suddenly Elchonon jumped up and grabbed a cookie and ate it – the first solid food he had eaten since the accident the day before. He gobbled it down and grunted as if to ask for another one. 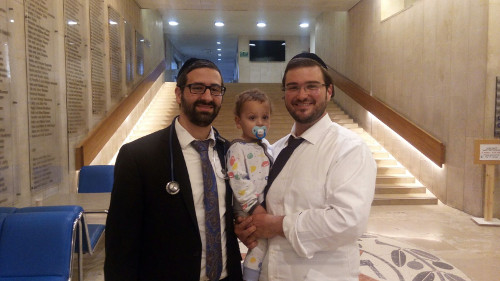 Holding my son in the hospital.

I told him, “Elchonon Aharon, you can only have another cookie if you ask. So say 'cookie'.”

Then he said it again. He pointed to a pomegranate on the table and said “Apple” – which was good enough for me. And from that point on he didn’t stop talking, jumping, dancing and playing. Our Elchonon was back!

I immediately called my wife and word got out to the hundreds of people who were hoping and praying. We were told how people all across Israel were doing amazing things in the merit of our son’s complete recovery. Jews from every possible background came together in unity.

Four days after the drowning we were discharged from the hospital with a perfect bill of health. The doctors told us that they could not understand what they were witnessing. It was an outright miracle. The community of first-responders were stunned, crying tears of joy and relief.  Our phones were ringing off the hook from all over the world. Our neighborhood, French Hill, became like one big family, all of our hearts united in distress and now in jubilant celebration. 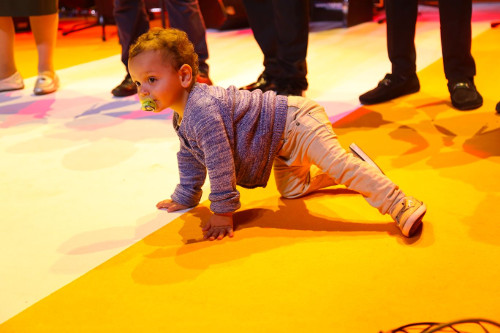 We were invited to a benefit concert for United Hatzalah with some of the best singers in the Jewish music world. I was asked to share our story with the thousands of people there. As I thanked God and all of His heroes for saving our son, the audience broke out in laughter -- Elchonon started performing somersaults on stage and dancing. And that was the headline in the Jerusalem Post the next day: “Miracle baby who dies on Sukkot dances on-stage five days later”. 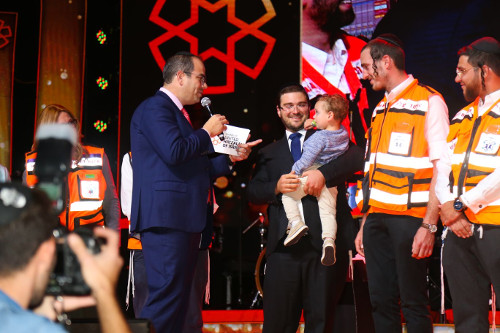 Holding my son at the United Hatzalah concert.

Experiencing the clinical death of our only son and then his miraculous recovery has left my wife and I emotionally shell-shocked. Words fail to express the depth of gratitude we have to the Almighty for being the recipients of such an outright miracle. The unity and outpouring of love we saw from thousands of people make us feel more connected than ever to the Jewish people. We are eternally grateful to the first-responders and the doctors for all their heroic efforts of in saving our son.

And the gift of seeing our son run ahead and then look back as if to say, “Hurry up already, Daddy!” makes me well up with tears and say out loud, “Thank You.”

Of Angels And Poinsettias

Footprints of Gratitude: How I Got Out of My Florida Funk