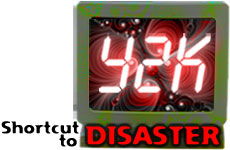 Never has single a numeral surrounded by two letters, struck so much terror in the hearts and minds of humankind. Companies have spent billions to fix the Y2K bug and government billions more.

The Y2K "bug" was inadvertently planted by otherwise well-meaning computer programmers in an effort to save precious disk space by assigning a two-digit, instead of a four-digit, designation to indicate the year. The result is that when millions of computer clocks arrive at the date 01-01-00, any non-"Y2K compliant" computer will enter a severely confused state of "forward into the past."

Will this lead to the ultimate Armageddon with all of our society's systems that rely on computers coming to a sudden crashing halt? Or will it simply mean a few days of inconvenience? Either way, the lurking question remains: What great lesson can we draw from this gargantuan gaffe?

I remember one of the many times that I was rushing to make a late-night flight after lecturing at a Discovery Seminar. My host in Seattle drove me to the airport directly from the seminar location and made excellent time. In fact, although I had originally calculated that I would have just minutes to go from the airport lobby to the gate before the plane left, the driver seemed to have made such great time that I still had another full hour before departure.

Glancing at my watch, I complimented my host on his driving prowess, and I proudly announced that we could continue our fascinating discussion for at least another half-hour.

The half-hour passed, my host drove off, and I entered a totally deserted airport lobby. Looking up at the departure monitors I noticed that they were all blank. So I sauntered over to the airline ticket counter, where a lone employee stood. To my surprise she said that my flight had left 15 minutes ago. I looked down at my watch, then up at the big clock in the lobby. What time zone was I in? The Really Stupid Zone. I had mistakenly moved my New York-based watch back four hours instead of the required three.

With the airport security locking the doors and taxi service nowhere to be found, I had to walk to the only hotel sporting a vacancy sign and spent the next sleepless hours lying in bed muttering to myself.

I made the early morning flight, but, because my watch dial was inaccurate by just 1/24th, I blew every appointment I had in New York that day. Such a small mistake... such a big mess!

Rabbi Israel Salanter, the 19th century founder of the Jewish Mussar movement which stressed the study and application of ethical self-improvement, taught the following deep principle: Whenever launching a new effort -- be it a new undertaking of scientific study, or simply teaching a young child to read -- you should compare the endeavor to the construction of a tall building.

When laying the foundation for what will become a skyscraper, the architects, engineers and masons must all go to great pains to ensure that the moorings of the building are built on a plane which is precisely level. In fact, although each and every row of bricks will be carefully checked to make sure they are well laid, far more care must be taken with the foundation.

Should the bricks begin to miss their marks near the top of the building, the effect would be almost imperceptible. However, should the foundation be off by even a mere fraction of an inch, by the time this skyscraper ascends, it will already be so architecturally unstable as to pose a teetering threat to itself and to all those unfortunate enough to be situated around it.

The same principle applies to laying the foundation of society - our moral values...

How is it that in our day and age the world continues to be plagued by war, oppression, addiction and abuse?

It starts with an error in the most basic of moral foundations. What is the principle upon which Western society is based? Hedonism? The relentless pursuit of material satisfaction?

Every one of the great world conquerors believed in "might makes right." If you are unfortunate enough to be weaker than I, that automatically entitles me to take advantage of your body, your soul and your property.

The Jews had another take on might and wealth: "Might makes responsibility." The Torah called for caring treatment of every living thing, even animals - at a time when humans devoured each other for sport in the Coliseum. Jews were commanded not to harm trees, thousands of years before the term "environmentalist" came into vogue.

Jews have been credited by U.S. President John Adams and modern historian Paul Johnson with introducing to the world the concepts of universal education, social responsibility and the sanctity of human life.

Why has Jewish life survived and thrived for thousands of years? Why has the Jewish nation outlasted the mighty empires of Egypt, Babylon, and Persia? What was the fate of the ancient Greeks, ancient Romans, and Germany of our century?

The secret to Jewish success is a solid foundation of morals and values. It's the set of instructions for living contained in our Torah.

Perhaps we Jews have gotten a bit lazy. We have taken a few shortcuts by eliminating a small detail of Judaism here, and cutting out a seemingly arcane support beam of observance there.

Let us use the lesson of Y2K as a wake-up call to check our own moral foundations. They may not seem noticeably off-center just yet, but small changes may become far more pronounced during the next phase of construction: in our children's time... in the next millennium.