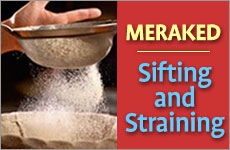 In many lists of the 39 melachot, Borer is followed by the melacha of Tochen (grinding). In our list, though, we will jump over Tochen for the moment to discuss Meraked (sifting).1 This is out of convenience, because conceptually Meraked is related to the two we've just covered – Zoreh and Borer – in that it also involves separating items from each other.

With Meraked, the separation is done by means of a sifting device, like a strainer or colander. (As you'll remember from our prior lessons, Zoreh involves separating through air power, and Borer involves separating or selecting by hand.)2 Through such sifting, items that were mixed together are isolated from each other.

The classic example, from the Mishkan (Tabernacle), is flour. Flour was needed to bake the bread that was used in the Tabernacle service, and it had to be sifted so that any unwanted debris (e.g. pebbles or soil) would be removed.3

As with Borer, the act of Meraked serves to 'improve' the original mixture. That is, the end product is more appealing than the original (to the person doing the separating).

There are a relatively small number of common Meraked applications. We'll take a look at some of them.

Strainers/colanders – A person might use a strainer to drain water from cooked pasta or vegetables. For example, let's say you cooked the pasta on Friday afternoon, and didn't have a chance to drain it before lighting candles. Can you drain the liquid out now that Shabbat has begun? This would be a textbook case of Meraked, since you are using a utensil to separate between the two items (that is, the water and the food).4 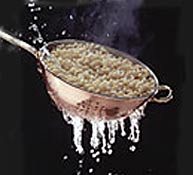 Salt shakers – A salt (or pepper) shaker might look like a straining device, but it actually fulfills a different function. The holes at the top aren't used to separate items; they simply prevent too much salt from coming out at once. As a result, salt shakers may be used on Shabbat.

What about if a person puts rice grains in the shaker to absorb the humidity? Although the shaker would then function as a strainer, by allowing the salt to pour out while keeping the rice in, most authorities still permit it, because the shaker is not devised for "straining rice."5 Don't forget, though, that the salt would still need to be shaken out for "immediate use" only.6

This all applies to a kettle where the filter is permanently attached. If it can be unscrewed or lifted up, then you can pour as much as you want. Once you remove the filter, then no straining is taking place when you pour.8 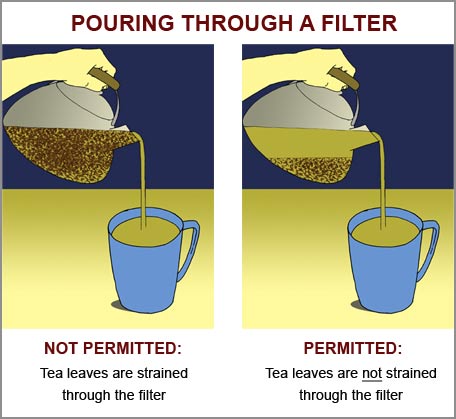 Filtering liquids – for example, wine. Many wines contain grape sediments at the bottom of the bottle. You cannot filter the wine through a cloth or strainer to remove these sediments, since most people don't want to consume them as they're drinking the wine.9

Why should the habits of "most people" make a difference? An act is only Meraked if the filtering removes items which people don't want to consume. Or, as Rabbi Ribiat puts it, "the unwanted elements (i.e. pesolet) are generally objectionable."10 So, in our case, where the sediments are such an item, filtering them out is considered Meraked.

What about the case of ice cubes in a pitcher of water: Can you pour out the water, if the spout blocks the ice cubes from exiting? In this case, it depends how meticulous you are about keeping ice out of your cup.11

"Clear" liquids – that is, liquids that people would drink as is – may be filtered, since the filtering doesn't really accomplish anything.12 This is why the mesh screens found on many sink faucets are acceptable on Shabbat. In many developed cities, the water has already been treated before it gets to our sinks, so having it go through the screen is not a halachic 'filtering'.

However, say your water is not properly treated or cleansed before it reaches your house – for example, in a city after a major storm or in a developing country. If you would never drink this water unfiltered, then the sink filter would actually accomplish something, and therefore it cannot be used on Shabbat.13 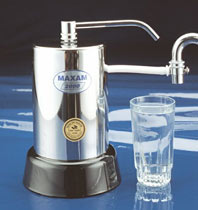 The same rule would apply to using a Brita water filter, or a reverse-osmosis filter: It would be permitted on Shabbat – unless you would never drink this water unfiltered.

Finally, if a mixture consists of only bad (undesirable) parts, then it is permitted to select, because nothing is being purified. Thus it is permitted to place a metal drain filter in a sink to filter garbage from dirty water.14

Nonfoods – Meraked also applies to inedible items. Sand is an often-cited example. (Children may play in sandboxes on Shabbat, so long as the sand was designated for that use prior to Shabbat.15) The child should not use a sifting toy, however, because this is likely to strain out rocks or other items.16

Examples of these melachot, particularly Borer, abound. Hopefully, the concepts we've studied will give you the tools to identify Borer issues in other scenarios, to apply these principles where relevant.

25. Gozez: No Need to be Sheepish
Who Was Josephus? The Controversial Backstory of the Famed Historian
Should I Break Up, Get Engaged or Keep Dating?
Time Is Your Precious Commodity
Comments
MOST POPULAR IN Jewish Law
Our privacy policy