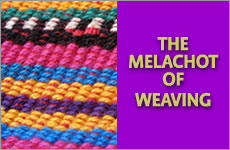 All about the construction and operation of a loom.

Once threads have been made from wool, the next job is to weave them together. This, of course, was the reason for making the threads to begin with.

There are four labor categories associated with the process of weaving. Since they are so closely connected, we will study them as a unit. Outside of weaving, you are unlikely to encounter these melachot. Nevertheless, understanding them is worthwhile, both to see how we get to the next set of melachot, and to fully appreciate this area of halacha.

What is weaving, anyway? What actions does it involve?1 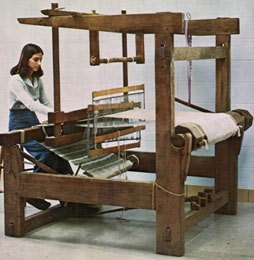 Basically, weaving is the combining of threads to form a fabric. Even in the times of the Talmud (roughly 1,500 years ago), weaving was done by means of a loom. For our purposes, we'll describe a loom as a hand-operated machine that enables many threads to be combined at the same time.2

You start by setting up vertical threads (called the warp threads). We refer to them as 'vertical' because they go up-and-down from the perspective of the weaver. To set them up, you stretch them around two beams that run parallel to each other. These threads will serve as the 'base' for the horizontal threads to be added.

This set-up, or "dressing the loom," is the first of our melachot, known as Maysech.3

Next, the warp threads need to be made ready to 'receive' the horizontal threads (called weft threads).

To do so, two square frames, called harnesses, are set up in the middle of the loom, perpendicular to the two beams. Each harness holds strings running from top to bottom, and each string has a circular loop in the middle. The weaver runs the warp threads through these loops, to make them ready for combining with the weft threads.4 These loops are known in weaving terminology as heddles, and in halacha as batei nirin. Creating these loops is a melacha known as Oseh Shtei Batei Nirin ("making two heddles").5 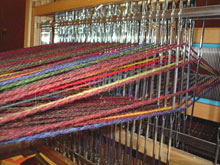 At this point, the weaver is ready to do the actual weaving. This involves moving the weft threads through each of the two sets of warp threads (see the description in footnote 5). The weft thread is first wrapped around a spindle. The weaver then uses a foot pedal to raise one harness, and pushes, or 'shuttles,' the spindle of weft thread through the warp threads on that harness. He repeats this process with the second harness.

Combining the warp and weft creates the actual weave of the fabric, and this action is the melacha of Oreig (weaving).6

Finally, the weaver uses a rod-like object to beat the threads into place. This ensures that the weave will be even. Because this beating completes the act of weaving, it too falls within the labor category of Oreig.7

With the fabric now woven, a few finishing touches are needed:

After removing the completed cloth from the loom, the weaver has to deal with the loose ends (in the literal sense) – that is, the last threads on each side of the fabric. One way of doing this involves 'un-weaving' some of the threads and then reweaving them back together so that the entire fabric is neatly finished.8 Doing this is known as Potzaya ('unraveling').9

(It is worth noting that the activity here appears to be a destructive one, and normally only constructive actions are considered melacha. The reason Potzaya qualifies as a melacha is because the unraveling is done to make it possible for the fabric to be re-woven in a better way – that is, the destructive act is in service of a new constructive act.)

Now that we have a basic understanding of how weaving works, we can understand a few applications of these melachot: 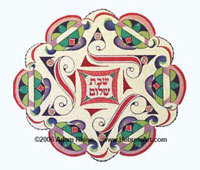 Also, removing such a loose thread from the garment is Potzaya, because by un-weaving part of the fabric you are making the whole garment look better.12

Understanding these melachot is much easier if you see them performed in real life (or at least in photos).13 If you're able, try to find an opportunity to watch someone use a loom

Laws of Shabbat
previous
Article #28 of 34
next
Like What You Read?  Give Jews around the world the chance to experience engaging Jewish wisdom with more articles and videos on Aish. It would make your mother so proud and as a nonprofit organization it's your support that keeps us going. Thanks a ton!

23. Bishul - Part 5: Hatmana – Insulating Food
For Every Individual, A Torah Scroll
Allegiance To The Monarch
Meet the Real You: Yom Kippur
Comments
MOST POPULAR IN Jewish Law
Our privacy policy
Aish.com Is Looking for Great Writers