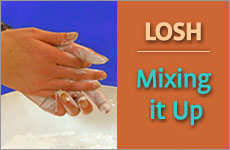 The process of making bread is almost over: We've grown our wheat, threshed it, ground it, and sifted it. Now we are ready to knead it – that is, mix it with water so that it becomes dough.

From this action comes the next labor category, known as Losh. It covers not just kneading dough, but any act of mixing a liquid with another substance, so that it results in a new, thick and consistent product.1

There are two ways to create such a mixture:

The Sages always seek to make halacha operational, to define the boundaries of our behavior. To help us understand Losh, they distinguish between types of mixtures. 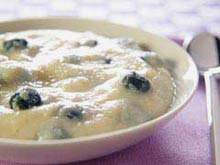 The primary category of mixture is known as blilah aveh3 – literally, a thick mixture. Included here are things whose consistency is so thick that they cannot be poured – e.g. bread dough, thick hot cereal, thick pudding, and the like.4

Creating a blilah aveh on Shabbat is the classic case of Losh, and is forbidden by Torah law.

The next category is the blilah rakah5 – thin, 'runny' mixtures. These are items that can be poured, although they are not liquids.6 Think of pancake batter being poured onto a griddle.

Creating a blilah rakah on Shabbat is forbidden by rabbinic law. However, you are allowed to make such a mixture if you make some changes in the process.

The action of Losh consists of two separate acts – (1) combining the two substances, and then (2) actually mixing them together. If you change the way you combine the items and also change the way you mix them, it is permitted to make a blilah rakah.

Thus: normally, we make baby cereal by taking the flakes, pouring water or milk on them (the combining) and then stirring them with a spoon (the mixing). On Shabbat, if we want to make the cereal, we need two shinui'im (changes): 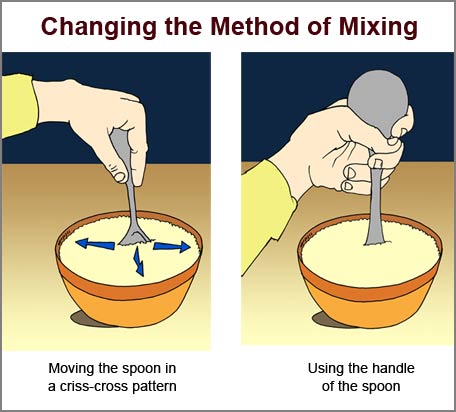 However, be sure that that the solid is immediately absorbed by the liquid, to avoid making a thick mixture in the process. Otherwise, it becomes a blilah aveh, which can't be done on Shabbat even with changes.8

There is one exception, however: If food is needed for a child, one can rely on the double- shinui method. (Though when possible, the child's food should be prepared before Shabbat.)9

Why should these changes make a difference? The whole reason that a blilah rakah was prohibited on Shabbat is because of its similarity to a blilah aveh. But, if we take steps to remind ourselves that it is Shabbat – by creating the mixture in an unusual way – we are unlikely to step over any halachic boundaries.

A third category is known as 'large pieces' (chatichot gedolot). This is a mixture containing, as its name implies, larger pieces of food as well as a liquid. Examples would be potato salad (potatoes mixed with mayo), tossed salad (vegetables plus a dressing), and similar items. Here, the food and the liquid remain separate and distinguishable, even when mixed. In other words, the mayo is only coating the potato. Therefore, we can create this kind of mixture on Shabbat.

The key to this category is that the food pieces are large. Conversely, when the food is chopped finely, and liquid is added, it is more likely that the two will become one 'unit'. This can happen, for example, with chopped tuna and mayonnaise. A relatively easy way to avoid this is to leave the tuna in chunks, and merely coat it gently with mayonnaise.

Putting liquid into a mashed food – We mentioned earlier mixing oil into a mashed avocado. The same would apply to mixing milk into mashed banana, and other such combinations. Interestingly, the acting of mashing the food itself is not Losh, even though it causes the natural juices of the food to combine with its solid parts. This is because the natural juices are not distinct from the food item itself.10 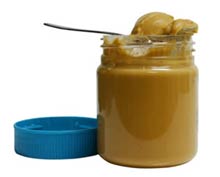 Re-mixing – If you have something that was mixed before Shabbat, and then becomes unmixed, you can "put it back together." The best example here is natural peanut butter, in which the oil often separates from the thicker part of the peanut butter. You can remix these parts on Shabbat, so long as (i) they had been mixed before Shabbat started, and (ii) the thick part is still moist from the oil (that is, the two parts have not separated completely).11

Thinning out – If something was mixed before Shabbat, it is permitted to thin it out further on Shabbat by adding more of the same liquid or even water (even if the mixture remains thick).12

Solids – It is permitted to combine two solids – e.g. sugar and cinnamon.

Cooked foods – There is a well-founded opinion holding that cooked foods are not included in the melacha of Losh. So if you want to combine a liquid with a cooked food (for example, mixing margarine into a baked potato), you may do so.14

Shaking vigorously – The rabbis made it prohibited to mix or shake a mixture vigorously, because of uvda d'chol – i.e. this is the way it is usually done during the week.15

Until now, we've been discussing how Losh applies to foods. However, it applies to non-food items as well. So, mixing sand with water to make mud; mixing cement; and making a plaster cast would all be violations of Losh if done on Shabbat.16

We've seen how the act of kneading dough serves as the basis for a broad set of activities falling under the heading of Losh. The only thing now left to do with our dough is to bake it. This brings us to the final melacha in the 'Order of Bread' – baking/cooking itself.

Laws of Shabbat
previous
Article #18 of 34
next
Like What You Read?  Give Jews around the world the chance to experience engaging Jewish wisdom with more articles and videos on Aish. It would make your mother so proud and as a nonprofit organization it's your support that keeps us going. Thanks a ton!

21. Bishul - Part 3: Standing the Heat…
Why Are The Prayers Of Yom Kipur So Repetetive?
Ha'azinu 5783: A Time for Unity!
Twisted Thinking
Comments