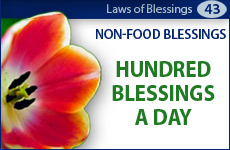 Averaged over a typical day, one bracha is said every 10 minutes.

Having learned to say the brachot properly, it’s now time for the finale – the special mitzvah to say 100 brachot each day.

Before learning how to reach that magic number 100, let’s first examine the two main reasons given for saying 100 brachot each day:

With 100 brachot spread out over a typical 16-hour day, on average one bracha is said every 10 minutes. As mentioned in class #39, the Sages cite the gematria (numerical value) of the letter koof in the word "tzaddik" (righteous person) for the idea of saying 100 brachot each day.4 The 100 brachot provide meditative moments of appreciation that lead to a life of righteousness.

Now let's get down to brass tacks and figure out exactly how to reach the total of 100 blessings.5 Note that the count of 100 brachot starts in the evening, just as the new Jewish day begins at sunset.6

On a regular weekday, you can come close to 100 brachot by praying the three daily services:

* Exceptions:
Sefardim count one less blessing for Tefillin.
Women do not wear Tefillin and Tzitzit.

These obligatory brachot get us up to 90 each weekday. The following "non-obligatory" brachot help reach the goal of 100:

On Shabbat, things are a bit different, since each Amidah has only seven brachot, as opposed to 19 on a weekday. On the other hand, there is Musaf plus three obligatory Shabbat meals, which include the extra brachot of Kiddush (at the first two meals), Netilat Yadayim, Hamotzee, and Birkat Hamazon.

So let's take a look at how you can reach 100 brachot on Shabbat:

This leaves us quite short. Besides the bracha of Asher Yatzar, here are two methods for reaching 100 brachot on Shabbat:

A story is told about the Brisker Rav,9 who was once a guest in someone's home. On Shabbat afternoon he asked his host for some fruit, but he didn't eat it. Shabbat ended and still the fruit remained uneaten. The Brisker Rav explained: He initially requested the fruit because he was missing two blessings from the required 100 – which the bracha rishona and achrona on the fruit would have covered. However, during the afternoon service in shul, he was called up to the Torah where he recited two blessings: one before the Torah reading and one after.10

Other holidays essentially follow the pattern of Shabbat, with the following adjustments:

Reductions to the count include:

Additions to the count include:

Optional brachot to increase the count:

Due to the prohibition of eating (and the shorter Amidah), Yom Kippur is perhaps the most difficult day of the year to reach 100 brachot. The obligatory count is as follows:

That leaves us 33 short. In this case, it is essential to count the additional 29 brachot by hearing every blessing of the Torah reading and Haftorah, while intending to fulfill your obligation, and answering "amen."

Additional brachot to complete the count are Asher Yatzar (aside from the one already counted in the morning), and the smelling of fragrant spices.12 If necessary, other praises in the Yom Kippur prayers can also be counted.13

In the merit of being careful say 100 brachot every day, may we be considered to have fulfilled the directive to "fear God, to walk in all His ways, to love Him, and to serve God, and to guard His mitzvot."14

Hey! What’s That Thing On Your Head?
The Promise Of The Land
Which Chat Are You On?: Parshas Behar/Lag Ba’Omer
Do You Like Slow-Cooked Food? Thank the Jews
Comments
MOST POPULAR IN Laws of Blessings (Adv.)
Our privacy policy